The Law of Return to Israel: Who and When Jews Returned

Jews suffered greatly when Jerusalem was taken by the Romans in 70 CE.  They were taken to Rome or other places as slaves.  Some managed to remain in Judah while others scattered to other parts of the Middle East.  It wasn't till May 14, 1948 that Israel was again re-created out of what the Ottoman Empire had taken of what was renamed as "Palestine."  This was because of the WWI when the Ottomans had lost the war-being they were on Germany's side


Israel is for the Ingathering of the Exiles

The Law of Return of 1950 gave legal sanction to all immigrant Jews. Israel was created as a haven for Jews who had suffered for 2,000 years from anti-Semitism in other countries for being what they were;  Jewish.  Judah  had been occupied by the Romans.  Jews had been blamed for killing Christ by causing him to be crucified, which was something that the Romans had done to thousands of Jews in Judah,  but Jews were blamed anyway being he had been Jewish even though they had denied causing this.   Jews had been the object of attacks by the Crusaders, the Spanish Inquisition, and then the Holocaust and actually were expulsed from countries or forcibly converted to Christianity.  Some communities had been annihilated even before the Holocaust.  They had not had the rights of citizens in these 2,000 years until after WWI.  In the Middle East they were treated as Dhimmis, which were not 1st class citizens.  There they were penalized in many ways for being Jewish.  The one country of safety was the USA, which had its share of anti-Semitism.

Now, what is a Jew?  There is no legal definition.  There are halachic concepts (rabinical law) and sociological ones.  By halacha, a Jew is a person born of a Jewish mother.  They can also be Jewish by conversion to Judaism.  Under 1970's amendment, the Law of Return grants Israeli nationality also to the spouse of any immigrant Jew and his descendants for 2 generations and to their spouses equally whether they were Jewish by halacha or not. 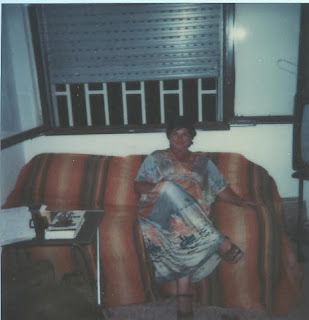 1981:  Here I am in my Sachnoot apartment in Safed sitting on my bed-with pillows to look like a sofa in front of my barred window.  That's because we are on the ground floor.  We just moved in after living in Haifa for 10 months attending the ulpan (school).

5.  1980-2013 My husband and I made aliyah in 1980  and were in a large group of teachers of English from the Soviet Union.  We were one of the few actual professional teachers from the West and went through a 10 month program to earn our certification to teach English in Israel first.  There were over 40 in our class that was later divided into Hebrew language groups to bring us up to a level of higher ability.

The census now shows that there are 6 million Jews and 1.7 million Arabs living in Israel.  As conditions have become worse towards Jews in France and Sweden with much anti-Semitism, they have been forced to move to Israel. About 3 years after we arrived, Ethiopians were coming to Safed.

In integrating Jews from 2 separate cultures from the East (Sephardis, Mizrachim) and from the West (Ashkenazis) ,  we find that the  half of the immigrants that came from Muslim countries in North Africa and Asia had to live in poverty and  the basic values were those of a traditional and authoritarian society similar to the Muslim country they had left.  Most had very large families.

The other half came from European and American countries where the basic values were of a modern democratic and technological society.   This caused a cultural gap which gave immigrants from the developed countries an advantage over the Jews from the Muslim countries so the administration had to be devoted to narrowing this gap.

Education has been the means to do this.  Only 13% of children in 1956 from Asia and Africa attended high school  but by 1969-1970 there were 44% attending.  At the same time, children from Europe and America had 41% attending in 1956 and this went up to 77% by 1969-1970.   By 1970, 18.5% of marriages taking place were of mixed cultural origins.  In other words, the means to even out the disparity was through marriage.  It has increased since then.  Another means is through serving in the IDF.  It has erased differences in sex and in origins.  A Jew is just a Jew today in Israel, back to the way we were before 70 CE.  No differences.

The big population centers in Israel were in the coastal regions between Tel Aviv and Haifa.  New towns and development centers have been built.  This is where many of the immigrants have settled.  They have gone to Eilat, Dimona and Arad in the Negev; Kiryat Gat, Ashkelon and Beit Shemesh in the center;  and Karmiel which is almost all American and Kiryat Sh'mona in the Galilee.  I settled in Safed which is also in the Galilee simply because it reminded me of Oregon with all the fir trees and because it was higher up.  We went where jobs were available.  Being a teacher, I found that Jerusalem, which is a highly desirous city to live in, was already full of teachers and a more expensive place to live.  Teachers were wanted in development towns.  Israel managed to send Russians to the desert and Ethiopians to Safed where it was very cold, but they had to consider where available housing was at that time of immigration.  It gave us lots to laugh about.  Russians preferred to be in Tel Aviv where culture was at the height with music and theater.  We all had our preferences.

It is important to Israel to reclaim Jews who have been found to be still practicing Jewish  beliefs after all these years of separation.  They have been studied by rabbis and even have taken dna tests for their proof.  Through one or both of these tests, they have been accepted as one of our Lost brothers' descendants.  This has been prophesied in the Torah to happen at the end of days.  It's very exciting to us to find that many are still living and claiming their proud connection to the rest of us.  To me, they have gone through much pain to continue their heritage.

Posted by Nadene Goldfoot at 10:24 AM