Lost Tribe of Israel Living in India Move to Israel 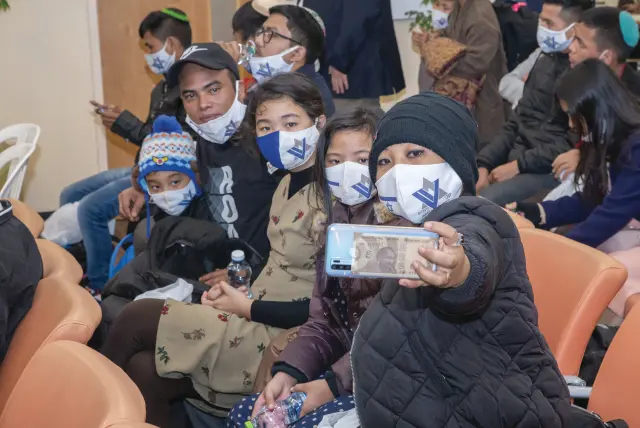 December 19, 2020:  "The group of 250 which made aliyah earlier this week was the first to arrive in two-and-a-half years.  The arrival of the Bnei Menashe  was a Chanukah miracle.  Early that past Tuesday, a group of 250 Bnei Menashe from northeastern India touched down at Ben-Gurion Airport on a special charter flight arranged by Shavei Israel, the organization I founded and chair, in conjunction with the Aliyah and Absorption Ministry. After undergoing formal conversion by Israel’s Chief Rabbinate, the immigrants will move to Nof HaGalil, formerly known as Upper Nazareth." The Bnei Menashe are descendants of the tribe of Manasseh, one of the Ten Lost Tribes exiled from the Land of Israel more than 2,700 years ago by the Assyrian Empire.

Some of the Bnei Menashe (Sons of Menasseh-one of the sons of Joseph, who was the son of Rachel and Jacob)who say they are from the Lost Tribes of ancient Israel that were taken by the Assyrians in the 8h century BCE are returning to Israel.  As they tell it,  they were banished from Israel then, but in actuality they were kidnapped and taken as slaves when Assyria attacked Israel.  Dozens are now moving  to Israel after 5 years of trying to enter   The Israeli Chief Rabbi recognized them in 2005, and about 1,700  moved there over the next 2 years before the government had to stop giving them visas.  Now Israel is agreeing to let the remaining 7,2000 immigrate.

On Monday the 24th, 53 arrived on a flight.  Michael Freund, activist on their behalf, said nearly 300 others will arrive in the next few weeks.  One of the immigrants was Lhing Lenchonz, 26, who arrived with her husband and 8 month old daughter.  "We are now in our land,"  she said.

Some Israelis think they are simply people fleeing poverty in India. Their claim's origins comes from a dream in 1951 of a Christian Pentacostalist who learned their religion was Judaism and their homeland was Israel.   Chief Rabbi Shlomo Amar has insisted that they undergo conversion to be recognized as Jews.  A rabbinical team had gone to India and converted 218 Bnei Menashe, and only stopped because the Indian authorities stepped in and stopped it.  DNA tests have been done and the feminine side (MTdna)  suggests a genetic profile with Middle Eastern people that may have arisen through inter-marriage". So far tests that have been done do not show a male connection to the Middle East, though it is possible that after thousands of years it is difficult to identify the traces of the common genetic origin. However, a positive answer can give a significant indication.  There are many new tests recently developed that may show more about their dna heritage.  It will be an exciting study.

"November 2006: In a Jerusalem Post article about an Indian historian's claims of finding a genetic link between his Northern Indian Pathan clan (Pashtuns  living in India, Pakistan and Afghanistan) and the Lost Tribe of Ephraim, Hillel Halkin says that "there's no such thing as Jewish DNA. There is a [genetic] pattern which is very common in the Middle East; 40% of Jews worldwide have it and 60% do not have it. But many non-Jews and people in the Middle East have it also."

They come from the states of Mizoram and Manipur near India's border with Myanmar (Burma) , where they say their ancestors landed after the Assyrians banished them.  They had become headhunters and animists, and in the 19th century many had been converted to Christianity.  However, they had continued to practice ancient Jewish rituals, such as animal sacrifices, which Jews in Israel stopped with the destruction of the Temple in Jerusalem in 70 CE.  The breakaway Judaic group was named Bnei Menashe by Eliyahu Avichail  because they believe that the legendary Kuki-Mizo ancestor Manmasi was Menasseh, son of Joseph.  They sing a traditional song which tells a tale similar to the Exodus.  According to the Bnai Menashe, they had been believing in one G-d and were familiar with many biblical stories when the Christian Missionaries first came upon them.  One thing, though their connection is shaky, they are people who want to be Israelis.  That is remarkable.

Israel has already taken in about 120,000 Falashas from Ethiopia (Beta Israel- House of Israel)  Many were arriving when I was living in Safed (Tzfat).  They claim to be from the lost tribe of Dan, though I've also heard stories of stemming from the Queen of Sheba when she visited King Solomon.