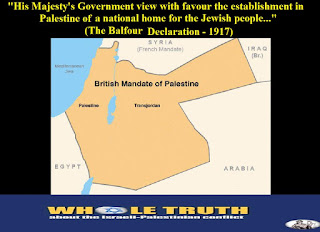 Nadene Goldfoot
Two major goals of Fatah, formerly called the PLO which was led by Arafat, who now live in Judea and Samaria, so called The West Bank, are destructive to Israel.

Article (12) Complete liberation of Palestine, and eradication of Zionist economic, political, military and cultural existence.
Article (13) Establishing an independent democratic state with complete sovereignty on all Palestinian lands, and Jerusalem is its capital city, and protecting the citizens' legal and equal rights without any racial or religious discrimination.

The last statement does not include Jewish rights as this planned "Palestine" will not allow any Jews to live there.  The whole concept of Palestine as is seen today by the Arabs involved is a destruction of Israel.  Doesn't the UN realize their goals?  How can they have one state that was accepted in 1948 be the bunt of destruction by 2012?  Also note that their goal is not just East Jerusalem but "Jerusalem, ."   I believe that this is because the city has been the revered city of the Jews since King David's day from 1,000 BCE to 960 BCE, making it 3,000+ years of having Jerusalem recognized as THE Jewish capital.  Yet suddently, since 1967, Muslims want it.  That's probably only because it has some pretty wonderful hotels in it that they want to take over.  This is coveting what is not yours, by the way.  This is the 10th commandment from Ex. 20: 14, You shall not covet your neighbor's house.  You can see what it leads to:  War.

Since Abbas's Palestine was recognized somewhat at the UN, the PA published a picture of their logo celebrating their 48th anniversary, making 1964 their origin though wikipedia did not come through with information about it.  Palestinian Authority daily published a map of their state which includes ALL of Israel as Palestine.  Their slogan is "The state and the victory."  Of course they will not and show this in their map of not recognizing Israel's existence.

I can't stress enough of the gall they have to claim Jerusalem.  It is not mentioned once in the Koran.  It's only their 3rd holy city in line with Mecca and Medina, and that because of their belief that Mohammad rose on his horse toward heaven while in Jerusalem.  No, it has nothing to do with that lesser action in their Islam. It's because of politics in taking the city of the Jews, and which also is important to the Christians as well.

The fact I stress is that the Palestinians are open about their desires to erase Israel and take over Jerusalem.  Knowing this, the UN voted them in, recognizing their goals and approving them, into the UN body.

What do we have to look forward to?  Yahya Rabah, Fatah official in the Gaza Strip, which is rather unusual since Fatah and Hamas once had a fight and Hamas kicked out Fatah, said that there will be a big central rally in Gaza on the 48th anniversary date.  They are celebrating getting non member observer status recognition just like the Vatican has in the UN, "winning" the battle with Israel with their accomplishments and of Fatah and Hamas joining together again..  (Al-Hayat Al-Jadida, 12/10/12.   Now the UN can take pride in awarding two terrorist groups the status in the UN.

Remember when Obama pressed Netanyahu on TV that he must go back to the 67 borders?  Netanyahu almost lost it in explaining why that was absolutely impossible.  Obama was going along with the PLO demands, which includes taking over Jerusalem if that ever happened.

I find it amazing that the Arabs have only wanted a state of their own since 1967 when Fatah's plans were foiled by losing the war also with their cohorts, 8 nations and their armies.  .  To get even, they now are demanding their own state.  There never was a state of Palestine.  Today's so-called Palestinian's forefathers were citizens of other nations surrounding Israel or even, going back farther, nations that have disappeared well before 70 CE.  Whereas, the Jews lost their Judea in 70 CE, so have wanted their own state back again for the past 1,943 years and have waited patiently trying to live among other nations, most of the time in 2nd and 3rd class status.  Before the Holocaust, Jewish leaders were dealing with British mandate holders in receiving the mandated land as the "Jewish Homeland."  How short the UN memory is.  Yes, the Holocaust made us all realize how fragile our lives are but our lives were mostly made up of a lot of suffering since 70 CE as well.  Jews have been the bunt of everyone's hatred since they created monotheism with the circumcised male in sports of that day, and in not observing the many assorted gods of Rome.

We remember Chanukah, our 4th day today of our celebration this year when we rebelled at the Greek-Syrians taking over Jerusalem and putting idols in our temple.  We found oil for our eternal light and lit it after getting tough with these foreign soldiers and forcing them out.  Inner strength prevailed which is something called upon today to fight such repugnancy.  Our hero was Judah, the Maccabee who fought against Antiochus Epiphanes and his soldiers.  No, losing Jerusalem again is not in our plan.  1967 told us our faith is not neglected or dead.

Posted by Nadene Goldfoot at 10:48 AM