Who Were the Jews of Ukraine? Khazars? 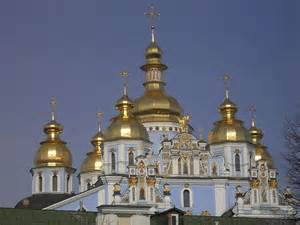 Kiev, Russia
Jews from Judah have lived in the Balkans, in the Caucasus including Georgia, along the northern shores of the Black Sea and in other areas of eastern Europe since Roman days, probably even before 70 CE when Jerusalem fell and people were either slaughtered or taken as captives destined to be slaves.  Jews have been traders for ages as they lived in the crossroads of civilization.  There were large Jewish communities there before the Khazar empire was established.  Romans and Byzantines took control over ancient Greek colonies, and the Crimean Jews began to trade often with the Byzantine capital, Constantinople.  Later, most of the Crimea became part of the Khazarian empire.  The descendants of the early Jewish populations of the Crimea and Caucasus could have influenced the decision of the Khazars to convert to Judaism.  It was the Crimean Jews that came into direct contact with the Khazars.

Southern Russia back in the 600's was known as Khazaria.  They were Turkic horsemen from the steppes of central Asia, or the mountains of the Urals or Caucasus who believed in shamanism, the worship of spirits,  and the sky,  and lived as nomads. Trees were sacred.  They came to settle down as the centuries went by and a Kagan (king), named Bulan,  chose Judaism for the royal house and converted.  Only the king, leaders and members of the upper class converted to Judaism as reported in 903, by a Persian historian named Muhammad ibn Rustah, in Kitab A'laq an-Nafisa. He said that Judaism later spread to the general populace.   His people were able to choose for themselves whether they wanted to be Christians, Muslims or Jews as everyone was replacing their former Tengri beliefs.  It's thought that he chose Judaism as it was more politically correct at that time since then he didn't have to side with the many Muslims against Christians in trading.  There  was no anti-Semitism and the people were very liberal in Khazaria.

After the Roman Empire officially adopted Christianity, conversion to Judaism became prohibited. "Many Greek and Roman women married Jewish men before conversion to Judaism was outlawed by the Roman Empire, and many of the Southern European ancestral lines in Ashkenazic families come from these marriages." In 315, Emperor Constantine I issued the first Roman edict forbidding Jews from seeking converts.  No wonder it isn't our thing to do.  Even today we do not  practice this.  The punishment for doing so was that property would be taken away from  Jews caught assisting anyone to convert.  However, Judaizing movements did continue to spring up in many lands.   Bulgaria proselytes converted others to Judaism in the 800's.  There were even some Christian clergy members who converted.

The Byzantine Empire from 324-638 had strong anti-Jewish policies where they forced many Jews to leave for less dangerous places such as Khazaria.  Some of their emperors' policies were of forced baptism.  By 632, the emperor Heraclius said that all Jews must convert to Christianity.  Emperor Leo in  722 had the same policy.  Jews could not live in that empire.

Everyone referred to The Khazars as Turks.  They were described as having blue eyes, light or white skin and reddish hair.  Other Turkish tribes also had red hair.  Other writers said they had black hair and that there were black Khazars and white Khazars, light and dark skinned.  In an excavation of burial mounds from the 10th to 12 centuries, archaeologists found Khazars belonging to the Slavic people while others were short-skulled Europeans.  Only a few Mongolian types were found.  Another theory was that they originated from Khorasan which was eastern Persia who united with the Sabirs in the 6th century.  One claim is that they are related to the Georgians and Armenians.  Some of the Turkic people believe that they descended from Noah through Japheth and son Gomer to Togarmah who had 10 sons and that the Khazars were descendants of the 7th son.  According to what I find in the Bible, Noah leads right from Shem to Abraham, Isaac and Jacob and he leads to Moses and Aaron. 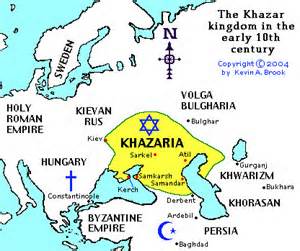 Khazaria was on the Silk Road and a lot of trading with everyone, east and west, went on.  Jews came to live in Khazaria from other places who had been persecuted and found a haven there. Being it was a trading center, people of all types lived there.   Ancient Russian chronicles say that some Jews from Khazaria visited Vladimir, the prince of Kiev, which became the capital of Ukraine, to try to convert him to Judaism in 986.  Jews were already living in Kiev by then.  It lay on the River Dnieper which was the commercial crossroads of Western Europe and the Orient which attracted Jewish traders in the 8th century.  Jewish merchants from the West called Radanites were traders in the city and were referred to in Hebrew as "goers to Russia."

Khazaria was a large empire with many large Jewish settlements.  At its maximum size, it took in the northern Caucasus and the Volga delta, and went as far east as the steppes of Khwarizm/Khorezm and as far west as Kiev. Between 730 and 750, the city of Atil, which was serving only as a royal camp, became the 3rd and final capital of the Khazar Empire. Here the kagan lived with the bek, members of the army, 4,000 attendants and "pure-bred Khazars.  A brick wall surrounded the city.  This could have been a Jewish camp.  Khazaran-Atil sat on the lower Volga near the Caspian Sea in eastern Khazaria and was the most important trading center of the empire and also was the center of religion and government.  It had many markets and baths.  People of all 3 religions lived here in harmony!  Iranians and Khwarizms, Muslims lived in the eastern half of the city which was known as Khazaran.  30 mosques were in the capital in the 920's.  There were still pagans who lived here.  In the 920's the ruler was Khaz, a Muslim.

Starting in the 10th century the empire started to get smaller and eventually ended.  In the year 930, Kiev was under Khazarian rule.  Two Jewish suburbs of Kiev were Kozary and Zhidove.  There were riots that broke out on the the death of Prince Svyatopolk in 1113 when the people attacked Jewish homes and burned them down.

In comparing Ashkenazis to Sephardim,
1. Ashkenazi showed twice the amount of R1a haplogroup DNA than Sephardim-10:5. and is very common throughout Europe and western Eurasia.
2.  J1, called the Cohen gene,  was almost even with a few more in Sephardim-22:19. found in Jews, Arabs, Armenians and Kurds, higher % in Iran and Iraq, carried by traders into Europe, central Asia, India, Pakistan
3. E showed up twice as much in Ashkenazim-20.5:9 but is found in the Middle East.
4. Q showed Ashkenazim being more prominent-5:2. found in northern and central Asian population, native Americans and 5% of Jews have this haplogroup.
5. Neither showed any N which was 0:0, found in northern Eurasia in Finns, Russians and Hungarians.  It's a common line in western Siberia.

The Jews tested today from Ukraine for their DNA most likely are showing genes inherited from Khazaria along with genes from Judea and Israel itself besides other possibilities.  Not all Ashkenazi Jews originated from Khazaria from the royal house that were converts.  Many Jews had lived in this empire from all sorts of other places.  It is possible that Jews whose ancestors had resided in Ukraine back to the 600's could have have Khazarian ancestors.  There are Jews whose haplogroup is an R1a1 who might show this distinction as this haplogroup is thought to come from southern Russia.    At one time I thought my father's line of Q1b1a could be the royal descendants, but that theory has been discarded even though we are connected to other Q'a who are the native Americans and we both originated from Mongolia, Siberia and parts of  Turkey and make up only 5% of today's Jews. My grandfather came from Lithuania.   Whatever ancestors reside in the Jews from Ukraine, they have turned out to be some of the most intelligent people with great leadership skills such as Moshe Sharett, Levi Eshkol, Golda Meier and Yitzhak Rabin, former prime ministers of Israel.    A Jew from Ukraine should feel most proud of his rich heritage.

I cannot thank lemeridian funding service enough and letting people know how grateful I am for all the assistance that you and your team staff have provided and I look forward to recommending friends and family should they need financial advice or assistance @ 1,9% Rate for Business Loan .Via Contact : . lfdsloans@lemeridianfds.com / lfdsloans@outlook.com. WhatsApp...+ 19893943740. Keep up the great work.
Thanks, Busarakham.