A Lot of BS From BDS People Against Israeli Product 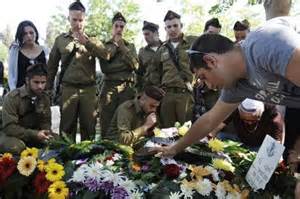 BDS is active here in the United States and The University of Denver has been targeted by starting a petition by DU Students for Justice in Palestine.  They are accusing the Golani and Givati Brigades of the IDF of egregious human rights violations of the Israeli occupation of Palestine, which in itself is a false claim according to what Professor Eugene Kontorovich of the Northwest U. School of Law would say about occupying Palestine.

This Denver group, with Arabic written on their website, faults the brigades of being involved in the Operation Cast Lead intervention of Israel's IDF in Gaza in 2008-2009.

They then accuse them of imprisoning children in Israeli dungeons.  This is such an outrageous lie that one cannot even think how they came up with this one.  Any kidnapping has been on the side of the Hamas terrorists, like the kidnapping of Shalit.    They're also accusing Israel of "ethnic cleansing!"

They claim that an Israeli product should not be bought because they are "subsidizing their living costs, playing expenses in the 5 and 6 figures."  The truth of this is most likely through being a tax-payer, and Israel does pay higher taxes than we Americans do.  Our taxes also pay for the living costs of our soldiers as well.  The money to any IDF soldier would be in shekels, not dollars, so where the decimal point is, would be interesting.  I know that as a teacher, I was only making the equivalent of $300 per month in 1981-85 in Israel as a junior high teacher of English.  You don't go to Israel to make money but to help a country who is righteous and is being wrongly attacked.  Israel doesn't have any other ulterior motives than to protect its citizens from harm.

It just so happens that Israel has been commended for their care in not harming civilians in Operation Cast Lead. Goldstone had to eat his initial report. Cast Lead  came after rockets, mortars and missiles came from Gaza into Southern Israel since 2001, with more flying in each year.  In 2000, the 2nd Intifada started, meaning that there were growing Palestinian attacks against Israeli soldiers and civilians.  Hamas took over in 2005 and they really flew in helter-skelter, at civilians.  Gaza was warned that Israel could not accept this attack and they had to stop which they didn't, bringing on Israel's operation. The 2nd Lebanon War started in July 2006 and the Golani Brigade fought to protect Israel like all the others involved.  They all fought for 34 days against Hezbollah.  That go around didn't end until September 8th.   One June 6, 2009, 3 soldiers of the Golani Brigade were killed in northern Gaza in friendly fire.  3 others were severely wounded and 20 more had minor injuries.

As for "occupation,"  Palestine was to be the Jewish Homeland as decided by the League of Nations.  However, Britain, who had the mandate, made changes and decided to reward King Abdullah 80% of the Jewish Homeland by creating Transjordan.  Actually, Israel is not occupying what was earmarked theirs in the first place.  Israel turned over Gaza to Egypt, but then got it back in 1967.  They left in 2005 for the sake of peace, and Jews have been living there ever since Samson and Delilah.  Peace didn't happen.  Gaza's Hamas  terrorists just felt freer to attack Israel daily instead.  So who is trying to do the ethnic cleansing?  It's the Arabs living in Gaza.  The proposed state of Palestine is to be only for Muslims.  They won't allow any Jews to live there.  That's Judenrein in German, which is what the Nazis tried to bring about.  I find it amazing that what is slung at Jews and Israelis is exactly what  the slingers are actually doing.

The Givati Brigade is an infantry Brigade that also serves as an amphibious force.  "They also participated in the ground phase of Operation Cast Lead." in Gaza (ended in 2009).The brigade's reconnaissance battalion entered the Tel el-Hawa neighborhood in search of Hamas operatives two days before the cease fire went into effect. An estimated 40 Palestinian gunmen were killed as dozens of apartments were swept.   Hamas reportedly decided to fire the commander of the Gaza City Brigade after its forces fought against the Givati."  They were a brave group of young men.

Anyone that harbors hatred for these young men who have been called upon to protect their people from rockets, mortars, missiles, suicide killers and from people trying to destroy their whole country will probably choke on their own bile filled with hatred and misunderstandings.  I say:  good for the company that these college students are tying to blackball with their demanding that their university not buy their product.  These soldiers need all the pats on the shoulder that they can get.

Israel had to stop rocket fire into Israel and prevent the weapons being smuggled into the Gaza Strip.  When the IDF went into Gaza, they weren't aiming for people.  Their target was the police station, military targets, weapons caches and rocket firing teams.  They went after political  (Hamas terrorists) and administrative institutions in the cities of Gaza, Rafah and Khan Yumis.

Occupation?  There aren't any Jews living in Gaza, but Israel reserves  the right to protect itself from attacks which is "unconscionable".

Here are a few words from a non-Jewish Scottish Professor to the Edinburgh University Student Union about boycotting Israel products.  It's from his letter.  "University is supposed to be about learning to use your brain, to think rationally, to examine evidence, to reach conclusions based on solid evidence, to compare sources, to weigh up one view against one or more others. If the best Edinburgh can now produce are students who have no idea how to do any of these things, then the future is bleak.

I do not object to well-documented criticism of Israel . I do object when supposedly intelligent people single the Jewish state out above states that are horrific in their treatment of their populations. We are going through the biggest upheaval in the Middle East since the 7th and 8th centuries, and it’s clear that Arabs and Iranians are rebelling against terrifying regimes that fight back by killing their own citizens.

Israeli citizens, Jews and Arabs alike, do not rebel (though they are free to protest). Yet Edinburgh students mount no demonstrations and call for no boycotts against Libya , Bahrain , Saudi Arabia , Yemen , and Iran . They prefer to make false accusations against one of the world’s freest countries, the only country in the Middle East that has taken in Darfur refugees, the only country in the Middle East that gives refuge to gay men and women, the only country in the Middle East that protects the Bahai’s…. Need I go on?
The imbalance is perceptible, and it sheds no credit on anyone who voted for this boycott. I ask you to show some common sense. Get information from the Israeli embassy. Ask for some speakers. Listen to more than one side. Do not make your minds up until you have given a fair hearing to both parties. You have a duty to your students, and that is to protect them from one-sided argument.

They are not at university to be propagandized. And they are certainly not there to be tricked into anti-Semitism by punishing one country among all the countries of the world, which happens to be the only Jewish state. If there had been a single Jewish state in the 1930′s (which, sadly, there was not), don’t you think Adolf Hitler would have decided to boycott it?"