Haplogroup J1 and J1c3d or The Cohen Gene 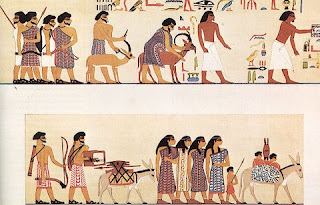 As far as many of us are concerned, science has validated the Bible through DNA of which the first 5 books happen to be the Torah.  DNA has validated the Biblical record about a Semitic people who chose a special way of life about 3,000 years ago that was Judaism, named for one of 12 sons of Abraham, Judah, even down to time periods.  This is BIG, as there are so many who think that the Bible is just a fairy tale.  In fact, the Bible includes historic facts, geography, genealogy, poetry, and hope as well as much prophecy that is coming true, to many's consternation. Many non-Jews do not concern themselves with it, going into the New Testament and skippng the Old or just studying the Koran.   The Cohen gene- "actually a combination  of neutral mutations indicating a common lineage." has been well studied in the past few years showing our history's truth of who we are.

Aaron and  Moses,were of the tribe of Levi,  who was a full brother of Judah. Both had Jacob as their father and Leah, his first wife,  as their mother.  Aaron was selected by Moses to be the high priest, the Kohen, and those descendants that followed had the same haplotype in their genes as well as the men before them in including their ancestor, Abraham, their 3rd great grandfather.  It's as if they have been tattooed for life and it is an inherited tattoo.  Most have the J1c3d haplogroup or J2.  This dna has been handed down from father to son for about 3,500 years from Abraham and going back even further in our biblical history from Noah's son, Shem.   Both Ashkenazi and Sephardi Jews can trace their lines back to a common male ancestor who lived about 3,200 years ago.  This marker of CMH is absent in non-Jews.  So in the beginning, all Jewish men were physically marked by being circumcised at 8 days after birth, as well as being marked in their dna, which we are just now finding out about it.

In fact, Abraham's first son, Ishmael, whose mother was the Egyptian, Hagar, carries the same dna.  So there are men that are from the Middle East who are not Jewish, and are today on a branch particular to the Arab line.  Abraham had a son by Rebekah,  Leah's sister, his first love and 2nd wife, named Isaac.  One of Isaac's sons was Esau, who was the brother of Jacob, later renamed as Israel.  Esau broke off from his father and also was a carrier of the Kohen gene, so he is another line of Arab Kohen dna.

The Kohanim are known as "G-d's Holy People-sanctified from birth to serve as the "Priests" of the Temple, to bless the nation, and to educate the people in the ways of G-d.  Genetic research confirms that the Kohanim are the most ancient unbroken male dynasty in the existence in the world.  The Torah followed this up by describing the ancient dynasty.

It is said that Levi, who was the 3rd son of Abraham and Leah, was prone to a quick anger.  His descendants turned that zealousness to good  as shown when they were able to repeatedly stand up for values and G-d's honor.  His descendants' zeal is said to have been ingrained from Levi onward.  The Kohen may show he has a strong will and determination, a trait found among Kohanim.  They will also feel a bond with like members, and are to themselves an extended family.  They did their work diligently, fast and efficiently.  They were the ones chosen to perform the Temple Service to be the spiritual guides and instructors of the nation.

The lineage had to be verified.  Not everybody could claim to be a Kohen.  The status was only possible through the testimony of 2 qualified witnesses through direct knowledge that his paternal family served in the Temple.  Only men whose genealogical status was thoroughly investigated by the Sanhedrin, the High court, were allowed to participate in the Temple Service.  One honor they received  was to be the first on Shabbat to read aloud from the Torah to the congregation.  Though surnames have been introduced around the 18th century, and Kohens took surnames other than Cohen, they continued in their duties and today are found to have the Cohen gene as well, showing that the oral tradition worked.  Cohens have known who they are for the past 2,000 years of living in the Diaspora.

Even after the Babylonian Exile of 597-586 BCE, and with the reinstitution of the Temple Service in Jerusalem, Ezra the Scribe, a Kohen, examined the genealogy of his contemporary Kohanim.  They had to have with them, proof of their lineage.

The rest of the tribe of Levy were Levites.  They assisted the Kohanim in their duties.  So they also should have the same dna, but with today's challenges of migration because of fear for life, and the fact that the expectations for the Levites were not as strict as the Kohens, their dna has been more mixed, though still with markers of their Jewish history.  A Levite is the 2nd person to read from the Torah and also has duties to perform in the Synagogue service.

Both Ashkenazis and Sephardis who are Cohens are found to have the same dna. showing that in 70CE we were all together at the fall of Jerusalem to the Romans. The J1 haplogroup (M-267) is at least 16,000 years old originating around Anatolia and Mesopotamia.    "If you have no oral tradition of either being a Cohen, or of being Jewish, your Y chromosome is still part of Haplogroup J, or perhaps a subset, J2, and most likely your deepest ancestor was part of the Neolithic farming expansion that began about 9500 years ago from the Fertile Crescent."

The Jewish people have retained its genetic identity for over 100 generations while  living in the diaspora. Yet one may be Jewish without the genetic connection as converts have occasionally come into the fold.   They are still  fullfilling the prophecy and the  promise while just trying to maintain their own lives.    They kept their covenant while many tried to keep them from doing so with threats, conversions and even death at the stake. To live through being degraded, hated, living with accusations, fear, attacks, and still maintaining their stubbornness to adhere to their beliefs for this length of time takes extraordinary people who only make up 0.02 % of the world population today, about 14 million in all.  Out of about 7 million male Jews in the world today, about 5% or 350,000 are actual Cohens.

Posted by Nadene Goldfoot at 4:02 PM

This is greatly flawed. Abraham had Ishmael by Hagar, yes. Then Issac by Sarah. Jacob and Essau were the twin sons of Issac and Rebekah. Jacob married Leah, had sons and also by her sister Rachel, Benjamin and Joseph are from Rachel. All other sons were from Leah and the two handmaids of either sister.

This says Abraham had children Rebekah. Get the facts straight before you publish. I am J1 genes and my husband is Levite and Kohen.

The Earth is FLAT.

What about mtDNA? I am J1c3 but have no idea about having any Jewish ancestry. According to this I originated from Anatolia/South Caucasus/Near East: http://eprints.gla.ac.uk/106314/1/106314.pdf so there must be something in it.

I am J L26 and my great grandfather was said to be a red head of jewish ancestry. During my grandfather's last days, though I was not present, a woman from some Israelite institution (if I recall correctly) came to visit my grandfather, had a brief conversation, took a few notes, and said that he has come from a very long way, and it was a pleasure to see him. I believe that there really doing statistical research on all J haploid, as his haploid and questions about his father's family history was emphasis of her conversation.

It is written that there are imposters who are currently sitting, Or occupying the plase of those legitimate still scattered through out the globe. Those who are illegitimate have lifted the banner of the legitimate. Figure it out, you have been imputted by societies and by God to play this silly role.

Yes. I've seen it. But its not only one land. There are endless plots of flat lands. On them rest the immortal souls. Those who have inherited THEM. I say them, because everything is life there.