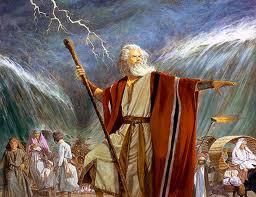 Charlston Heston as Moses during crossing the sea
Moses (b: c 1391-d: abt 1271) told the Israelites that they were not to cheer when confronted with the death of their enemy.  "The enemy are children of G-d as well, he told the Israelites.    This occurred when the Egyptians were caught in the sea as it rolled back from allowing the Israelites to cross on dry land.  Since then, Jews have followed this practice.  We are not happy about the deaths of any of our enemies.  After being bombarded by rockets, mortars and missiles from Gaza from 2000 to today's news, Israel has gone into Gaza aiming at the centers of the rockets firings; not the people.  We do not relish killing people. Israel has  done a better job of this than most countries ever have and have been commended by generals from other countries of avoiding having casualties and even putting their own soldiers in harm's way to keep casualty numbers down.

There are rules of conduct in wars today that have been around since 1863 at least.  We have the Geneva convention and the Hague Conventions.  These are International Humanitarian Laws.  The PLO, which now calls itself Fatah, stationed in Judea and Samaria, does not follow these rules.  They do the exact opposite. Yet the UN only comes down on Israel's head for having finally, after 12 years of being attacked, defended themselves.

Fatah even has a facebook page now where they brag and have posted facts where they have murdered dozens of Israelis and they call them "heroic achievements".

Another boast posted was about  when 11 Israeli athletes were murdered at the 1972 Olympic Games in Munich, Germany.   This attack was Fatah's under the command of Martyr Commander Salah Khalaf Abu Iyad of their Black September branch.  They attacked Israelis to "sustain a Palestinian presence and representation in international forums."  Actually, I think it was just to keep Israel from winning as they couldn't stand the competition.  "The German newspaper Der Spiegel  wrote in a front-page story in 2012 that the German authorities had a tip-off from a Palestinian informant in Beirut three weeks before the massacre. The informant told Germany that Palestinians were planning an "incident" at the Olympic Games, and the Foreign Ministry in Bonn viewed the tip-off seriously enough to pass it on to the secret service in Munich and urge that "all possible security measures" be taken. However, according to Der Spiegel, the authorities failed to act on the tip, and have never acknowledged it in the following 40 years. The newspaper further adds that this is only part of a 40-year cover-up by the German authorities of the mishandling of the massacre.

Fatah praises suicide bombings by women against Israel and  missile attacks from Gaza, especially the firsts to happen.  A person is glorified for killing the most Israelis in a single terror attack.  Another for a double suicide bombing in the central bus station in 2003 in Tel Aviv when they brag about killing over 30 and wounding over 200 in one attack.  They have even over-bragged.  They killed 23, not 30.

These are the very people that Kerry and Clinton have passed onto Israel as their peace partner.  They have completely different morals.  They have erased Israel on maps and have renamed all the land as "Palestine." All this terrorism has been glorifed for the past many years but has been stepped up since the peace talks have been announced.  Are they trying to put down Hamas in doing this or impressing the EU?  The result is that their people are amoral and do not know what is true and what is a lie about themselves.

One evil act was the  March 11, 1978 bus hijacking when 37 civilians were massacred.  Their glorification of their evil deeds only reminds me of their evil condition.  Evidently they are so proud of Dalal Mughrabi who was the commander of their first terror attack maritime operation in 1978.  She was the leader, and since women are held down so much, I find this interesting that they got her to be the lead henchman.  Yes, she was an evil woman.  She and her crew left Lebanon and  landed on the Israeli coast near Tel Aviv from the sea, hijacked a bus and murdered 37 civilians of which 12 were children.  They are so proud of her achievements.  I bet they all cheered, too.  71 were wounded in this attack which had Dalal killing people from the time of landing to the bitter end.

We should remember that ":Israeli prime minister Menachem Begin stated in a press conference that Israel "shall not forget the carnage" and added that "there was no need of this outrage to understand that a Palestinian state would be a mortal danger to our nation and our people."

US President Jimmy Carter must have been a different man.  He must have not started his writings, for  " He released a statement saying the attack was a "an outrageous act of lawlessness and senseless brutality. Criminal acts such as this advance no cause or political belief. They inspire only revulsion at the lack of respect for innocent human life."

Another female suicide killer was pretty 28 year old divorced Wafa Idris,  who in 2002 in Jerusalem became the 1st female suicide terrorist of the Al-Aqsa Intifada when one Israeli  was killed and 150 were wounded.  Ironically,she had worked for the Palestinian Red Crescent (like Red Cross) in Ramallah.  While in the bomb-laden ambulance, and wearing her uniform, she had crossed the checkpoint into Israel under this disguise. This woman must have been depressed as she had miscarried a child and was told she would never have another.  This caused her husband to divorce her.  That's just the sort of person Fatah preys on to carry out their massacres.  They do not value their own lives.

During holidays they usually are glorifying some murdering terrorist which gets a lot of publicity.

Their braggadocio lets us know that Fatah changed the Al-Aqsa Intifada into a military escalation.  They were the evil culprits who escalated the sniper operations against the Israelis moving into Judea and Samaria and were the ones shooting at Israelis in the Gaza Strip.  Heavens, they don't want anyone to think it was Hamas! In fact, they tell us that it was Fatah who retaliated against the assassination of Sheikh Ahmed Yassin who was the very founder and head of Hamas.   It was executed by Fadi Al-Amudi of the Al-Aqsa Martyrs' Brigades, a Martyrdom-seeker.  It looks like Fatah is just full of martyrs who do not mind dying.  Oh yes, they have those 72 virgins to look forward to.

The first to launch a rocket from the Gaza Strip to southern Israel was Al-Amarin and Majdi Al-Khatib, two of a kind belonging to the Al-Aqsa Martyrs' Brigades and were Jihad Commanders.  This must have happened around 2001.

Since Mohammad is their role model for behavior, I wonder what he would think of their acts?  Would he praise them, too?