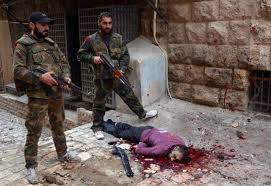 Syria's defensive tactic if the USA and Britain attack its rocket bases is to attack Israel full force, including mystery surprises.  It's like taking a hostage for protection and Israel is the closest to pick on.

This comes from Syria's Foreign Minister, Walid Muallem today.  He mentioned al-Qaeda in in his speech, strange, since it's Hezbollah out of Lebanon who are on the side of Syria along with Iran.  However, he did mention that Israel's attackers would be a Syrian-led mob made up of Iran, Iraq, Lebanon and themselves, the usual countries that have warred against Israel in the past.

Muallem is demanding proof that the Syrian government used chemical weapons against their own people, which have been collected by investigators other than the UN investigators who were delayed beyond the time which would have divulged more facts.  Just the fact that Doctors Without Borders had reported Saturday that about 3,600 patients had been treated at 3 hospitals for symptoms coming from exposure to chemical weapons in which about 300 have died tells the story, but they aren't the Official Inspectors.  The group told Monday that out of their 100 volunteers, 70 who had actually taken care of these patients became ill and one had died.

This has caused the USA with John Kerry citing this evidence to talk about the military response, and we know that Britain's ships are also in the Mediterranean along with 4 of the Americans ready to attack with cruise missiles.   Targets in Syria are the military ones.

In the next few days the USA's intelligence agencies will give Assad the proof he is asking for telling how his forces used chemical weapons.  They have proof from radio or phone calls between Syrian military commanders.  The UN inspectors were to be given free passage by the Syrian government but the lead car in a caravan was hit in the tires and front window and taken out.  They were going into a Damascus suburb.  Kerry was brilliant in his retort to Walid al Moallem on Thursday that if the Assad government had nothing to hide it should provide immediate access to the attack site, which never happened.  They had stalled for 5 days and then attacked the area even more by shelling it and destroying all evidence.

If the Syrian government turns around, this can all be averted.  This has been a moral obscenity and is inexcusable to do to their own citizens of which over 100,000 have already been killed.  Russia is expected to veto an action from the UN.  France might step in to help out the allies.   Is one of the "surprises" intended to harm Israel the Al-Nusra Front, which is an al-Qaida-linked jihadist group?  Assad acts like the chemical weapons cause  is just a front to go in and take over Syria.   Already a top Syrian offical had threatened Israel if Syria were attacked by the West.  This was from Syria's Deputy Information Minister, Half Al-Maftah,  said in Arabic.

Israel has intended to stay out of the conflict,  but if they are attacked, they will not be held back.  They have warned Syria not to retaliate against them.  Of course Israel is being blamed for even thinking Syria would do such a thing.  "A member of the Syrian Baath Party national council, Halef al-Muftah, said that Syria regards Israel as being "behind the aggression".  Israel said the chemical attacks came from outside Damascus in the mountain range where the headquarters is of the 4th Armoured  Division and  is located and commanded by Assad's brother, Maher al-Assad.

A thought:  Could Maher be framing his brother just so he could become President instead?  It wouldn't be a first in the Middle East.