When The Third Temple Will Be Built 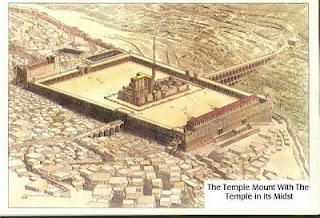 Cornerstone for the 3rd Temple: 1999 with Temple in the Middle

The 3rd Temple, following the destruction of the 2nd Temple in Jerusalem by the Romans, is to be built no later that the year 2,240.  That gives us 227 more years to start building.  The very first Temple was built by King Solomon (961-920 BCE) and destroyed by the Babylonians in 586 BCE.

The stipulations are many.  When the 2nd Temple fell in 70 CE, most all the Jews of Judah were dispersed.  Some were scattered into the Middle Eastern lands while others left it completely and were taken to Rome, and then later to Germany and points in eastern Europe.  Synagogues were created as a house of learning and prayer.  The 3rd Temple or Ezekiel's Temple  called the Beit haMikdah is described and prophesied in the Book of Ezekiel.  It is to be a house of prayer for all people and is to be an eternal edifice and permanent dwelling place of the G-d of Israel on the Temple Mount in Jerusalem.

The organization in Jerusalem called the Temple Mount get their plans that they already started working on in the 1980's from the Book of Ezekiel, chapters 40-47.  The Temple Scroll also has descriptions of the 3rd Temple.

Orthodox scholars and rabbinic authorities believe that rebuilding the Temple should happen when our Moshiach is at the hand of divine Providence and that Jews should try to rebuild the temple themselves.  Jews believe that the Moshiach is due anytime from now to about 200 some more years.  Christians are anxious for Jesus and his 2nd coming so are also anxious to have Jews rebuild the 3rd Temple.  The question of sacrifices which took place in the 1st and 2nd Temples are to become part of the 3rd Temple agenda, and there is mixed thought on that.  Orthodox feel that this will be resumed, but Maimonides wrote in his "A guide for the Perplexed" that "G-d deliberately has moved Jews away from sacrifices towards prayer, as prayer is a higher form of worship"  Then again, in his book, "Mishneh Torah", thought to be the final authority in Jewish law, says that animal sacrifices will resume in the 3rd temple and details how they will be carried out."  It could be that only grain offerings will be offered. 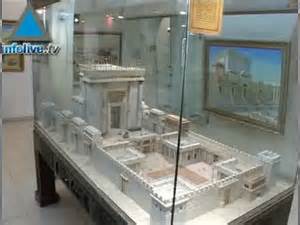 Model of the 3rd Temple As Seen in Jerusalem

In an orthodox synagogue, one would hear prayers for the reconstruction of the 3rd Temple.  The morning prayer service includes a study session of the daily Temple ritual and offerings as a reminder.  They would also hear the daily and special-occasion psalms that the Levites used to sing in the Temple.  After the Torah reading is a prayer to "restore the House of our lives and to cause the Shekhinah (Divine Presence) to dwell among us.  The Amidah includes prayers for acceptance of the "fire-offerings of Israel."  It ends with meditation for the restoration of the 3rd Temple.

The Temple had rules of ritual purity before entering.  The laws of "family purity" are based on these Temple rules that are followed today at home.  Other rules come from the Temple days such as immersing in the mikveh before Yom Kippur, washing hands in the morning and before meals and after attending a funeral.  If ever the Israeli authorities permit Jews to ascend the Temple Mount, one has to observe certain ritual purity rules first..  Going to the mikvah is going to be expected.

Rabbi Shlomo Goren, Chief Rabbi of the IDF in August 1967, organized public prayer for Jews on the Temple Mount.  This was after winning the Six Day War which was a miracle in itself.  Jews had not been allowed there since 1948 by the Muslim Jordanians.  Rabbi Goren was all for Jewish sovereignty over the Temple Mount even though our 2nd Temple had been destroyed there and replaced with a Muslim mosque. The site was holy.  They had to fight off Muslim guards and Israeli police, but held a prayer service.  Rabbi Goren continued to pray in the Makhkame building overlooking the Temple Mount and conducted yearly High Holiday services there.  He called for the establishment of a synagogue on the Temple Mount and this call has been picked up by his brother-in-law, Chief Rabbi of Haifa, She'ar Yashuv Cohen.

This was despite the fact that Moshe Dayan had given the keys to the Temple Mount to the Muslim Waqf, so Goren was criticized by the Israeli Defense Ministry for doing this.  The Chief Rabbis have since restated that no Jews were allowed on the mount due to the issues of ritual and impurity.  The secular people went along with this as it kept the peace with the worried Muslims.  Goren continued to say that Jews were not only permitted but commanded to ascend and pray on the mount.  He did support building the 3rd Temple on the Temple Mount and was involved in projects involving the site, possibly such as the Temple Mount group.

Opposing this were the Chief Rabbis of Israel; Isser Yehuda Unterman and Yitzhak Nissim, along with others saying that they had warned for generations against entering any part of the Temple Mount.  This could have been prompted by the government's pressure in preventing Muslim-Jewish friction over the Mount.  The rule remains.  It is forbidden for Jews to enter any part of the Temple Mount.  In January 2005 a declaration was signed confirming the 1967 decision of Moshe Dayan who single-handedly made this decision on his own without consulting anyone.  The Jewish state of Israel controls everything in Jerusalem except the Temple Mount, which many people are frustrated about.  They feel the need to pray there as well.  Non Muslims are allowed to enter mosques in other places.  For the waqf to have this ruling here in Jerusalem is unfair, they state.  It happens to also be a big tourist attraction, and Christians have been allowed to visit.  Only the Jews are kept away.  This is the only discrimination going on in Israel and it comes from the Muslims against the Jews over the most precious holy site in Jerusalem.

Right now the biggest problem is the creation of Palestine in which the Arabs are insisting on taking over east Jerusalem which includes many sites such as the Western Wall that Herod built around the Temple area where all Jews come to pray today.  Israel has been legally unified as one city again, making life much better for all.  Thoughts about the 3rd Temple are causing the Muslims to react most fearfully with rioting.  If they were really smart, they'd open it to all people for prayers, fullfilling the desire of Levi Eshkol, who was Prime Minister in 1967 and died in 1969.  Then there would be no cause to riot.  All would be happy.

However, what is happening today is that the Al Aqsa Mosque site on the Temple Mount has been closed by the Jerusalem police to Jews and non Muslim visitors today as the police are afraid of riots from the Muslims.  It is open every day except Friday in the morning and afternoon but one cannot pray.  It is forbidden unless one is Muslim.  The police in Jerusalem are carrying shields that are about 10 feet high and look like they are made of pexiglass as they are transparent.  That's to protect them from things that are thrown;  chairs, food, rocks, etc.  Religious segregation causing violence practiced by rules issued from the Waqf is the worst type of apartheid!    Oh, but Moshe Dayan certainly didn't know what he was doing when he tried to calm the Muslims down by handing their waqf the keys to the Mount.  He gave us back all of Jerusalem, but deleted the most special of all sites.