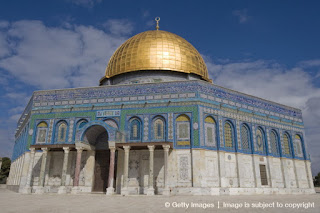 The Temple Mount is on Mount Moriah in Jerusalem. Today's 2nd Temple that was first built by King Solomon (961-920 BCE) in Jerusalem was on this same site.  . King David, his father,  wasn't allowed to build it as he was a king of war.  Solomon was known for his wisdom and peace and built it as a shrine for the Ark of the Covenant, the sacred vessels and offerings for worshippers.

The Babylonian exiles, Jews taken away by the Babylonians in 597 and 586 BCE were allowed to return in 538 BCE and they rebuilt the Temple by 515 BCE., known as the 2nd Temple.   When Jerusalem fell to the Romans in 70 CE, the Temple was destroyed, but not before the Romans carried off all the loot from it.  A Roman temple was later built on the site, and since the Moslem Period, the Mosque of Omar, otherwise known as the Dome of the Rock,  has stood there.  It was built in the center of the Temple area by Caliph Abd al-Malik in about 738 CE to replace the temporary structure set up by Caliph Omar in 638 CE. Mohammad had died in 632 CE.

The Temple Mount is referred to as al-Haram al-Sharif to Muslims and is ranked as one of the most sensitive religious sites in the world.  There have been sporadic riots here which is said to have the potential to ignite much wider unrest.

The Six Day War in 1967 was when the Temple Mount fell into Israel's hands again, after a wait of 2,000 years. Since then, Jerusalem is a united city.   Though Israel became a state on May 14, 1948, the eastern portion of Jerusalem, where the Temple Mount is, was barred to Jews by Jordan.   Prime Minister Levi Eshkol made plans to takeover the Temple Mount and thought that the administration of such a holy site should be filled equally by Muslim, Christian and Jewish clerics so that everyone would have the right to be atop the mount and pray at this holy site for the 3 faiths.  He wanted to have his dream of a multi-faith council to run the compound.  The Muslim mosque would not have been touched, but all faiths would be allowed up on top of the mount.

Moshe Dayan (1915-1981),  minister of Defense, deciding otherwise, gave the keys to the Muslim Waqf. Evidently, in his biography, Dayan clearly stated that the last thing he wanted was the Jewish Temple to be rebuilt, the Beit Hamikdash.  We are supposed to wait for the coming of the Messiah for that.  There is the Temple Mount Faithful Group that Stanley Goldfoot belonged to preparing for that day.  Being a progressive, Dayan didn't consult the Prime Minister or the Knesset, and the Israelis didn't get to vote on it.  That's who controls it to this very day.  Being Dayan was a war hero, there wasn't much Eshkol could do about it.   "Dayan had gone ahead and told the Muslims running the Temple Mount that they could continue to run the mosques there-and later went further by preventing Jewish prayer all over the Mount."  His reasoning was that he felt matters would get out of hand and lead to a religious clash.  He even told the chief of staff that the army chaplain was to remove the branch office he had established in the building which adjoins the mosque compound.  For this Moshe Dayan will be known as the man who gave away the Temple Mount giving the Muslims an opportunity to make Jerusalem a huge issue in creating a Palestine.

Jews have been allowed atop the Temple Mount but are not allowed to pray, say the Muslim rule.  Only Muslims are allowed to pray there.  Jews can't even look like they are praying.  Then the Waqf has done more construction on top and has thrown out relics from the Temple of which an archaeology team has begun to sift through the dirt.  It was deposited like garbage by the Muslims.

Since that day, Muslims have been trying to reclaim Jerusalem's Holy sites in order to de-legitimize the Jewish connection to the land and the city.   It's their way of wiping Israel off the map and into the sea.  Police are forced to bar Jews from entering the Temple Mount.  Of course the Muslims had threatened violence. No excuse is listened to, such as bringing children there to demonstrate rituals associated with the Temple, like the bringing of the first fruits on Shavuot.  People can't understand this and feel it's unfair to them.  However, hundreds of Jews were able to visit the Mount over Shavuot.  At times, dozens of Muslims sat and blocked the entrance of Mughrabi Gate, the one non-Muslims have to use to ascend the Mount.  Any Jews who could manage to run the gauntlet were followed and harassed by Muslims, yelling the whole time the Jews were up there.  This year a riot did break out and the police had to intervene and closed the gates and evacuating the Jews.

There's more than what meets the eye in this clash.  The Islamic Movement in Israel had told its followers that Jewish groups were planning to desecrate, storm or endanger the al-Aqsa mosque and even arranged buses for worshippers to come and "protect" the site.  Sheikh Raed Salah, head rabble-rouser said to his crowd, "We'll liberate al-Aqsa with blood and fire!"  He told his crowd that Israel wanted to build a synagogue on top of the mosque.  Hamas's Palestinian prime minister, Salam Fayyad, told some foreign ambassadors that the riots were due to "an assault by extremist religious settlers on the Temple Mount compound."  Syria's foreign ministry added that Damascus believes the Israeli security forces' invasion of al-Aqsa was part of Israel's scheme to Judaise Jerusalem and destroy the mosque"  I don't think these people ever read a real history book.  These were all lies.

Jerusalem and the Temple Mount are parts of Israel that are  re-establishing the Jewish National Home.  The synonym for Jerusalem happens to be "Zion."  Every day for 3 times a day for the past 2,000 years, Jews all over the world face Jerusalem and pray for it to be restored to its former glory.  It's unfathomable that Jews are banned by its own government from praying on the Temple Mount.  What a concession we have given to the Muslims!  What concessions have they ever given us to promote peace!  None.  Recently a female Knesset member decided to get to the bottom of this matter and find out why they can't pray there.  Many are angry with their government  for allowing this to happen. 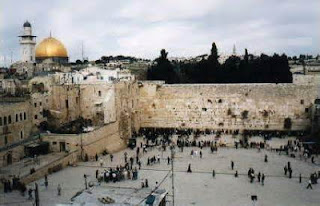 Today, Jews pray at the Western Wall(Wailing Wall) that surrounded the Temple, built by Herod.  The Holy of Holies of Solomon's Temple was at the western end of the Temple is very close to this wall.  It was regarded as sacred as far back as the Talmudic Period of the 10th century CE.  From 1948 till 1967, Jews were kept away from this wall which is now under Jewish sovereignty.  On Shavuot 1967, 200,000 people visited.

In the meantime, Muslim adults and children are not taught of the Jewish connection to Israel and their land.  Muslims all over the world do not understand the depth of feeling Jews have for their holy places and their historical homeland.  "Palestinian and Muslim leaders must desist from the incitement against Israel and the deligitimisation of the Jewish connection to the land."