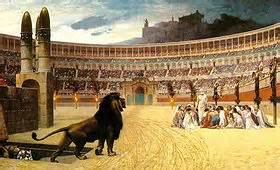 Josephus( 38 CE-100 CE)  was a 32 year old captive general and also a Cohen from Judah. He had gone to Rome in 64 on a semi-public mission.  The Jews revolted in 66 and he was regarded as an expert in political affairs and was sent as a representative of the government to Galilee where he assumed military command.  He was captured by the Romans in Jotapata and went over to the Romans- a turncoat.   He was made a historian for the Romans.

He tells about Jerusalem's fall in 70 CE.  It had been under siege. The people were rounded up from remote places and were shut up as in a prison.  The Roman army surrounded the city.  Many died.  The Romans had slain some of them, some they carried away as captives, and with others they made them search for underground passageways with Jews in hiding  and when they were found,  they were slain.  2,000 people were found slain, partly by their own hands and party by one another, but destroyed by famine. The stench from dead bodies  was intolerable.  Most of the Romans got away from the bodies but the greedy ones went among the dead that lay in heaps and walked upon them while searching for wealth.  Many  of those that had been put in prison by the tyrants were now brought out.  Simon, a leader of the Jews was among them.  He had been forced to surrender.  He was reserved for the triumph march and when there,  was to be killed.  The Romans then set fire to the extreme parts of the city and burnt them down and entirely demolished its walls.

This attack on Jerusalem was  the 2nd time it had been desolated. It was the 6th time it had been taken.  This time it happened in the 2nd year of the reign of Vespasia on the 8th day of the month of Gorpieus (Elul),  Shishak, king of Egypt was first, Ptolemy, the son of Lagua, then Antiochus, Pompey, Sosius and Herod took the city but preserved it, but before all these, the king of Babylon conquered it and made it desolate 1,468 years and 6 months after it was built.  The first king (2000-1550 BCE )was Melchi-zedek, a Canaanite and called it Salem or Jebus.  King David of the Jews fought the Canaanaites and he and his people lived there.  It was demolished entirely by the Babylonians 477 years years and 6 months after him.  From King David to this destruction under Titus was 1,179 years, but from its first building till this last destruction were 2, 177 years.  The conquerors did not take into account its great antiquity, vast riches, diffusion of its nation over all the habitable earth or the greatness of the veneration paid to it on a religious account that been sufficient to preserve it from being destroyed.  The siege of Jerusalem then ended.

Caesar gave the order to demolish the entire city and temple but leave as many of the towers standing as they were of the greatest eminency,  such as the towers called Phasaelus, Hippieus and Mariamue.They also left  much of the wall that  enclosed the city on the west side.  It was spared so as to afford a campground for the soldiers  as were the towers also spared to demonstrate to posterity what kind of city it was and how well fortified it was which the Roman valour had subdued.  The 10th Legion was left as a guard. with some horsemen and companies of footmen.   The 12th Legion had been overcome by the Jews under Cestius, their general.  He expelled them out of all Syria and sent them to Melesine, near the Euphrates which was in the limits of Armenia and Cappa Jocia.  Titus was going to Egypt. so he went to Cesarea by the seaside and laid up the rest of his spoils in great quantities and gave the order that the captives should be kept there for the winter season which hindered him then from sailing into Italy.

While Titus was sieging Jerusalem, Vespasian boarded a merchant-ship and sailed from Alexandria to Rhodes .  There he sailed away in ships with 3 rows of oars and was received in 3 cities he passed by, from Ionia into Greece to Corcyra to Iapyx and then journeyed by land.  Titus marched from Cesarea to Cesarea Phillippi and put on many shows of a great number of captives that were destroyed by such acts as throwing a great number to the wild beasts, and others by the multitudes were forced to kill one another.  While watching the arena slaughter, he heard of the seizure of Simon, the son of Gioras who had taken his friends with him.  They were all stone cutters.  They had their iron tools and provisions and let himself and them down into a cavern underground.  They had reached the spot where they had to dig their way to continue so that they could rise and get into a safe place.  Simon put on a white frock and buttoned over that a purple cloak and appeared above ground.  The army was there and he found out what had happened to his people.  He was bound up.  He voluntarily gave himself up and was taken to Caesar.

While Titus was at Cesarea, he celebrated the birthday of his brother Domitian and had a 2,500   Jews killed in his honor.  Some had to fight against beasts in the arena, some were burnt, and others had to fight each other.  The Romans killed 10,000 this way.  Caesar ambled onto Berytus, a city of Phoenicia and a Roman colony and stayed a long time celebrating his father's birthday where he had a multitude of the captives here destroyed the usual ways.  The Jews in Antioch were in danger.  Josephus mentions, " For as the Jewish nation is widely dispersed over all the habitable earth among its inhabitants, so it is very much intermingled with Syria.by reason of its neighborhood, and had the greatest multitudes in Antioch by reason of the largeness of the city.

Titus Caesar was getting ready to enter Rome.  Everyone came out on the road to greet him, wives, children, all.  He could barely reach the royal palace for all the people in the way.  He made his sacrifices of thanksgiving to his household gods for his safe return to the city.  The throng of people feasted and drank in Antioch and begged him to remove all the Jews of their city.  Jerusalem fell and all Jews everywhere were in jeopardy. The Germans revolted from the Romans but were subdued.  The Samaritans overran Mysia but were compelled to return to their own country again.

Within three years of Jerusalem's liberation under the Bar Kochba revolt in 132 CE, Rome marched against the rebels and killed Bar Kochba in 135 CE. The Sanhedrin officially labeled him a false Messiah and Jerusalem was again in Roman hands. Jewish Jerusalem was once again blotted out and Aelia Capitolina was built on its site as had been planned. Because the war had cost the lives of Roman heroes, the Jews were thenceforth forbidden to enter Jerusalem upon penalty of death. Hadrian attempted to destroy every connection Jerusalem had with the Jewish people. Christians of Jewish background were also excluded from the city, but gentile Christians were able to remain.  Jews that were left alive were sold in the Roman Empire as slaves.