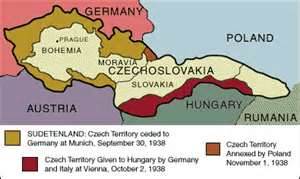 Nadene Goldfoot                                               The Ancestors of John Kerry
Moravia was a former province of Bohemia which later fell into the hands of Austria, and then finally is known as Czechoslovakia.  Jews have lived there since the Middle Ages.  They  suffered in massacres in 1337, and again when the Black Death (Bubonic Plague) struck in 1349.  About half were expelled from the country in 1421 which was even before the mass expulsions in the Spanish Inquisition of 1492 which affected other countries as well.

In 1648 onward, they suffered from Polish persecution.  In the 17th century a General Council of  Moravian Jewry was formed which was given the job of taxation and enacting laws for communal self-government.  It's capital town was Brno (Brunn), an important center for rabbinic learning.

In 1824 Benedikt Kohn was born in the southern part of Moravia.  He was a successful master brewer of beer.  His first wife died, so he moved to Bennisch (Horni Benesov) in 1868 when he was 44.  There he married Mathilde Frankel.  There were only 27 Jews including them, enough for a minion,  living in their town of 4,200  according to the 1880 census.  However, Benedikt died in 1876, so Mathilde moved to Vienna with her children, Ida age 7 and Friedrich or Fritz, as he was called, born in 1873 and her newborn Otto.

Fritz and Otto were excellent students in Vienna.  At this time, all Jews were suffering greatly from anti-Semitism that prevailed in Europe. In 1894 Alfred Dreyfus, a young French Jewish captain on the French general staff was accused and imprisoned without a fair trial because he was Jewish. It took him 12 years to prove his innocence.    As a result of anti-Semitism and lack of paternal guidance, both boys later converted to Roman Catholicism.  In 1897 Otto, raised without a father, decided to abandon his Jewish name of Kohn and chose a new name by dropping his pencil on a map and where it landed became his name.  In 1901, Fritz joined him by taking his new chosen name.  They became the Kerry brothers as the pencil had  landed on Kerry, Ireland.  Fritz also changed his first name to Frederick and was called Fred.

Fred worked as an accountant at his uncle's shoe factory and married Ida Loewe, a Jewish musician from Budapest.  What's surprising is that he must have converted by then.  Ida was a descendant of Sinai Loew, a brother of Rabbi Judah Loew (Judah Low Ben Bezalel-1525-1609) who had been the chief rabbi of Moravia from 1533-73) .  He was the famous Kabbalist, philosopher and Talmudist known as the "Maharal of "Prague" who some say invented the character of the Golem.

Fred, Ida and their first son Erich were all baptized as Catholics.  In 1905 they immigrated to America, first living in Chicago and then settling down in Boston.  Two more children were born in the USA; Mildred in 1910 and Richard in 1915.  They lived in Brookline where Fred became a prominent shoe businessman, and they attended Sunday Catholic church services regularly.  Fred didn't dare tell a soul that he came from a Jewish family.  In 1921 at age 48 he got a room in a hotel in Boston and shot himself in the head.  It was before the crash of 29, so one can speculate that perhaps it was because of denying who he was.  He must have had a smattering of Judaism from his mother, and knew what a charade he was carrying on.  The burden was too much for him, also knowing what he had done to his wife and children.Ida died in 1960 in Sarasota, Florida at age 83.

By 1938 the Jewish population was 45,000 in Moravia, and most died in the Holocaust.  Very few returned after WWII.

Richard was only 6 years old when his father committed suicide.  He continued on with his life and attended Phillips Academy, Yale University and Harvard Law School.  He then served in the US Army Air Corps and worked in the US Dept. of State and later in the Foreign Service.  He married   Rosemary G. Forbes, the beneficiary of the Forbes family trusts.  The Forbes family had a huge fortune from trading in China.

They had 4 children; Margery (l941), John (1943), Diana (1947), and Cameron (1950).  John was a Massachusetts Senator, and in 2004 was the Democratic Nominee for President. Today he is the appointee by President Obama to be the next Secretary of State.   Cameron married a Jewish woman and converted to Judaism in 1983 and is a prominent Boston lawyer.  These children's  grandmother,  Ida, had  siblings, Otto and Jenni Loewe,  who were killed in Nazi concentration camps (1942-1945). Richard died in 2000 and Rosemary 2 years later.

John Kerry didn't know that he had a paternal set of  Jewish great grandparents.  Neither did he know that his paternal  grandfather and grandmother were born Jewish but converted to Catholicism.  Today we're finding through DNA and genealogical interests in ancestors that there are other Americans with Jewish heritage from the rampage of anti-Semitic attitudes that prevailed in Europe.

Madeleine Albright, born May 15, 1937, didn't know that 3 of her 4 grandparents were Jewish until 1997 when she became the first female Secretary of State.  She was born as Marie Jana Korbelova of Prague, Czechoslovakia.  Her Jewish parents were Josef Korel, a Czech diplomat and  Anna Spieglova.  They converted to Catholicism due to the Holocaust when in exile in 1938.  She  converted to Episcopalianism  at the time of her marriage in 1959. Her father later was dean of a school of international studies  and taught Condoleezza Rice.  Albright is fluent in English, French, Russian, and Czech; she speaks and reads Polish and Serbo-Croatian as well

Retired 4 star General Wesley Clark has announced that his father was Jewish. He was also going to  run for president in 2004 but didn't when he heard that Kerry was running.  His great grandfather was a Belarusian Jewish man who immigrated to the USA from the Pale of Settlement because of all the anti-Semitic violence from the Russian pogroms.  Wesley's grandfather was Jacob Kanne, who had been Kohen.  His father was Benjamin Jacob Kanne.  Wesley's mother was a Methodist.

Posted by Nadene Goldfoot at 9:15 PM