One Teeny State of Israel Amid All the Muslims Like Jordan 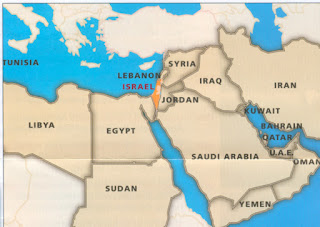 Jordan came about from Transjordan.  Sheik Abdullah I, born in Mecca, Saudi Arabia and the middle son of Sherif Hussein bin Ali had also wanted land and so the British gave away 80% of the mandated land scheduled to be the Jewish Homeland in 1921 to him instead. It became a state in 1922.  Abdullah's brother was Faisal who commanded the Arab Northern Army.  Lawrence of Arabia favored Faisal.   In 1948 Abdullah annexed illegally during the 1948 war with the Jews  the eastern part of "The West Bank" and proclaimed the Kingdom of Jordan with himself as king.. From 1952 the country was ruled by his grandson, Hussein.  In 1967 Hussein entered the Six Day War with other Arab nations but was defeated and Israel took over the West Bank (Judea and Samaria) which had originally  belonged to the Jews as Judah and Samaria.  It had once been the capital of Israel (Shomron) in 880 BCE.  Many of their population are the Palestinians who had fought against him.

Israel, this tiny state only 8,000 sq. miles of today, just a little more than twice  the size of Rhode Island,  is surrounded by 22 huge nations  together making  640 times Israel's size.  They are all states with the majority of the population being Muslims.   It's the only democratic state there.  Almost 6 million Jews live in Israel, while 1.4 million Arabs also live there.

It is only 3 miles to 60 miles wide.  Over half of the population  live along the coastline of this  narrow strip of land.  Gaza is also along this coastline.  The Jordan River acts as a boundary for Judea-Samaria and Jordan.

Hamas and Hizballah rockets can now target all of Israel.  8,000 rockets and mortars already have been fired into Israel since 2005.  A concern is now Egypt's border as attacks have also been coming from the Sinai.

Financial aid to Israel has been coming from the USA and also AIPAC, which is the American Israel Public Affairs committee.  They have been active for over the last 50 years.  The work they do is to help make Israel more secure.  Their nudging has helped bring about a bipartisan bill in Congress of getting US-Israel collaboration in missile defense, homeland security, energy and intelligence.  We also now have a US-Israel Free Trade Agreement, a first for the USA.

The first package procured of aid helped Israel to absorb Holocaust survivors and Jewish refugees expelled from Arab nations that happened from 1948 on.  Everyone speaks about the Palestinians who were told by their Arab leaders to leave their homes and removed themselves as a war was about to start with guarantees that the Arabs would win and it didn't happen.  At the same time, Jews in about the same numbers were forced out of Arab countries as a result of Israel becoming a state.  At least they had a place to go to.  Naturally they found homes in Israel while the Palestinians were kept in camps by their leaders as fodder for the fight against the Jews.  Those Palestinians who didn't leave are the Arab citizens of Israel.


This is where the Jews were born starting with Abraham about 4,000 years ago and where their King David established Jerusalem as his capital in Judah.  This state came about in 933 BCE after David's son, King Solomon had died.  The northern state was Israel and the southern section had become Judah.  It also took in most of the tribe of Benjamin and absorbed the tribe of Simeon which was isolated in the extreme south.  Judah did not have access to the sea so had remained a poor kingdom.  Because of this it didn't get involved with international rivalries and led a more tranquil existence.  It was in Judah that Mosaic monotheism was in a purer form.

Posted by Nadene Goldfoot at 2:32 PM