Christians United For Israel Program at Portland State U. 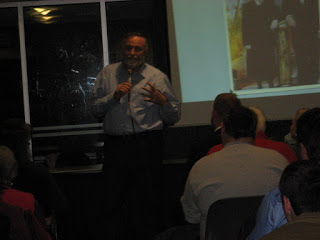 Nadene Goldfoot
CUFI met at Portland State U tonight with a marvelous program.  They had Colonel (Res) Bentzi Gruber of the Israel Defense Force (IDF) speak on the Ethics of War.   Israel abides by these rules which make them feel much better about what they might have to do.

First we heard about the growth and accomplishments of CUFI, which is only seven years old.  Their last visit to Washington D.C. had from between 800,00 to 900,000 people visit there who made presentations in favor of Israel.  The reason they understand and help Israel is because they study the "Old Testament" and quoted Genesis 12: I will bless those who bless you,, and him who curses you I will curse; and all the families of the earth shall bless themselves by you.."  The speaker also mentioned Chapter 17 which says: and I will give to you and to  your offspring after you the land of your sojourns--the whole of the land of Canaan---as an everlasting possession; and I shall be a G-d to them.

They are a group of religious Christians who see that the Jewish people are again under attack and that Jewish towns and villages throughout Israel are being assaulted by terrorist missiles and suicide bombers.  Thousands of Jews have been killed in cold blood with more attacks in the horizen.  Once again most of the world is standing idly by as they are attacked.  This group is outraged while so many are apathetic.  They are standing up and being counted and have openly declared their support.  I might add that they have done their homework.  They are an educated group of people who are not afraid to read about the history and the current events of what is happening to Israel and why.  They are not about to be swayed by inuendos and false facts spread of anti-semites.  I'm so proud to know them and count them as dear friends.

I learned that 70% of people in the USA have a positive attitude towards Israel, but this is not true in the campuses of our universities.  They celebrate a week  with an irrational idea that Israel is an apartheid state with their Apartheid Week campaign on their walls in posters.  CUFI 's young members have now created at least 300 campus centers and are making inroads in educating students about Israel.  If there's one thing that Israel is not-it's being an apartheid state.    Speaking of that later, the Colonel answered a question and said that the Goldstone Report from the UN, so falsely accusing Isreal of things that were untrue, even though it was edited and changed later by Goldstone himself, had made matters so bad for Israel.  Everyone is still believing his original report.  For a Jew to cause such a calamity to our only Jewish nation in the world is a grave sin.  Spreading lies is even in our ten commandments, and he did just that.  Goldstone had taken the false words of others and figured that was good enough.  Colonel Gruber read all the pages of this report in English, which was a feat for this Hebrew speaker.  He was so disgusted.

I was so engrossed in what Colonel Gruber had to say about how Israel goes out of it's way and even expects their soldiers to put themselves in harm's way many times in order not to cause civilian collateral.  They don't want to harm civilians.  He pointed out that in a regular war you know who you are fighting against because they wear uniforms, but terrorists don't.  It's not because they are too poor, but because this makes it harder to tell who they are.  They have the habit of standing amongst other unarmed people and  know that Israel won't hit at a crowd of people.

Not only does the IDF value human life, despite what rumors our enemies have been creating, but they know that harming children and pregnant women, for example, will cause your conscience to tear you apart.  They avoid causing reasons for suicides after going home from a war by trying to do the ethical thing.  This is war but they remember to avoid the collateral damage.  Don't take a life unless you have to.

Judaism is a very ethical religion.  The law of kashrut even considers the feelings of animals.  One of the laws that really impress me is the one where we don't mix meat with dairy products when we eat.  That means, acording to the kashrut law, we wouldn't eat a cheese hamburger and  drink a chocolate milkshake with it.   The reason for that is that a cow gives milk to its baby.  G-d forbid that we eat from an animal and then drink it's mother's milk.  This would make the milk cow feel so bad to see this happen.   We eat meat but not the blood of the animal.  It's salted to take the blood out after lots of soaking and rinsing.  Even at that we don't eat the parts with a large vein, so it comes down to eating tougher cuts.  This makes ordering a TBone steak rare is just not kosher.  As I see it, the laws pertaining to food are to create a very sensitive non animalistic person who cares about ethics.  It's a conditioning process to become considerate of others, their feelings, their rights, and their life.  It behooves me how people can think that we are a bad people knowing how much we care even for animals.  It's a requirement to feed our animals first before we eat.  And so our IDF has a list of ethics that must be met which all the soldiers know and follow.  I'm very proud of these men who put their life on the line all the time.

He was telling us that it's rough carrying a 60 lbs sack on your back when you go out into the field, and then putting on a helmet doesn't help.  I can imagine.  Israel is usually a very hot country.  As a soldier, you have 8 seconds to decide on what to do when alarmed.  We saw from the video just what can happen in 8 seconds.  It's like the blink of an eye.

Before Israel shoots at a target, they call into headquarters to get the okay.  Also, ammunition is extremely expensive and cannot be wasted.  One  lazer packed rocket costs a lot of money and can't be wasted.  Ha!  When I did Civil Guard duty in Israel, I was given but one bullet.  I had my German shepherd dog with me in the police van and figured that if we met some terrorists, she was going to have to protect me.  I did a lot of praying.

I understand that Reuters and CNN can set up situations for the notoriety.  We can't always trust our news.  The camera guy has to be a Palestinian for these agencies as he is the only one who can enter some villages safely.  A UN ambulence most often leads a group of terrorists.  It's there filled with their ammunition, and not for the injured.  They know that Israel does not fire on ambulences.  When Hamas won over Abbas's Fatah and kicked them out of Gaza, they took over all the ambulences for this purpose and fired 600 ambulence drivers so they could take them over.

Gaza is about 24 miles long and 5 miles wide.  Underneath lie at least 650 huge tunnels big enough to hold jeeps and trucks to drive through from Rafa to Egypt.  This is how they have been bringing in ammunition to use against Israel.  My concept of a tunnel had been something you could crawl through on your hands and knees.  Who knew?

When Israel had to attack a central target, they dropped leaflets to warn the people when they would come.  That wasn't all.  They made phone calls, and follow-up phone calls.  They texted.  All this to avoid collateral damage.  It's not a usual matter for a people to warn their enemy when they're coming, but they do all this because of the unusual circumstance of having to defend themselves in fighting terrorists who do not abide by any ethical rules at all.

Israel has sustained 351 rocket hits in November.  The terrorists try to hit Israeli civilians on purpose.  This is the difference between terrorists and freedom fighters.

And good gosh and Lord almighty!  Israel's army is not in the business of selling organs of people!  How people can create such ugly vomit-wretching lies I'll never know.  Colonel Gruber can't understand how people can be so gullible, either.  Anyone would see right away if they used their brains that any organ used for transplant has to be handled with care and kept in some cold pack container and rushed to a patient.  That's not going to happen from the front lines in Israel.  No!  What our IDF are watching out for is kidnappers of solders like what happened to Shalit.

This country that so many college campuses have defamed has no death penalty except in very extreme cases, as with the convicted Nazi war criminal, Adolf Eichmann.  The strictest penalties are prison and exile, which apply to those directly involved in carrying out, planning, assisting or supporting terrorists or terrorist activities.  Our Oregon governor would not have any problems with such a law at all, would he. 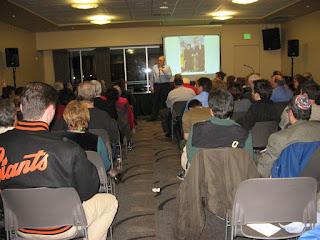 Resource:  Israel 101 produced by StandWithUs for CUFI
Posted by Nadene Goldfoot at 12:51 AM