How Britain Took Away the Jewish Homeland

Nadene Goldfoot
The Balfour Doctrine had established the Jewish Homeland perimeters which was coming about at the end of World War I.  Chaim Weizmann had helped the British win the war by his invention in organic chemistry by fermenting acetone-butyl, used in bombs.   Without it, they most likely would have lost.  This is one reason why Britain was going along with the creation of the Homeland in Palestine. 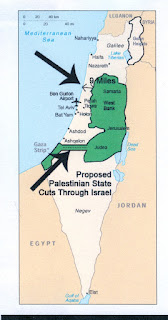 Colonial Secretary Winston Churchill then turned around and rewarded Sherif Hussein's son, Abdullah for his contribution to the war against Turkey in 1921.  Churchill installed him as Emir and took away nearly 4/5 of Palestine, 35,000 square miles, to create Transjordan.  Britain had already given the Hejaz and Arabia to the Saud family, so this was the consolation prize for the Hussein family.  The kingdom of Hejaz and Nejd was unified in Saudi Arabia on 23 Sept, 1932 by King Abdul Aziz al-Saud though he had started to take it in 1902.  Its area is 870,000 square miles.

1922 was the year that 80% of what was the historic land of Palestine and the Jewish National Home as defined by the League of Nations was given away to become Transjordan by the British.

Knowing that the Jews were to establish their homeland, the cold-blooded British placed restrictions on Jewish land purchases in what remained of Palestine, going against the provision of the Mandate in Article 6 that said, "the Administration of Palestine...shall encourage, in cooperation with the Jewish Agency...close settlement by Jews on the land, including State lands and wastelands not acquired for public purposes."


By 1949 the British had allotted 87,500 acres of the 187,500 acres of cultivable land to Arabs and only 4,250 to Jews.  They had limited the absorptive capacity of Palestine by partitioning the country.   Less than a million people lived in an area that now supports more than six million.


In 1915 about 83,000 Jews lived in Palestine along with 590,000 Muslim and Christian Arabs.  The British immigration restrictions on Jews went against the hopes for them while Arabs were allowed to enter freely.  By 1922, the Jewish population was 84,000 while the Arabs numbered 643,000.  In 1935, when conditions started to become bad for German Jews due to Nazis, the British then cut the quota  by 1/3.


Arab demands were given attention by the White Paper in 1939, the height of Nazi persecution in Germany. This is when my uncle came to New York.  The Paper said that an Arab state would be created within 10 years and Jewish immigration was to be limited to 75,000 for the next 5 years, and then it would stop altogether.  Jews could not buy land in 95% of the territory of Palestine.  Arabs were not about to create their own state, but they were allowed to immigrate without restrictions.   The Hope Simpson Commission from London found that the 1929 Arab riots came from ignoring the illegal Arab immigration from Egypt,.  Transjordan and Syria and that this displaced the Jewish immigrants.


Jews couldn't enter Palestine for the length of World War II when they were being gassed by Nazis.  Even after the war, the British refused to allow the survivors to find sanctuary in Palestine.  On June 6, 1946, President Truman urged the British to relieve the suffering of the Jews in displaced persons camps in Europe and accept 100,000 Jewish immigrants.  Ernest Bevin, the Foreign Minister, answered sarcastically that the USA wanted displaced Jews to immigrate to Palestine "because they did not want too many of them in New York."


It is truly a shunda that Britain broke their promise to the League of Nations and did not uphold their responsibility of creating the Jewish Homeland, but instead gave most all the land away to the Arabs and kept Jews from entering the country.  There must be a special section in the Book of Life for that.  They could take the responsiblity of the 6 million murdered in the Holocaust along with the Nazis.

Posted by Nadene Goldfoot at 3:34 PM