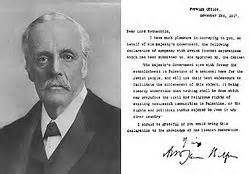 1917 Balfour Declaration-After the fall of the Ottoman Empire

1894 was the year of the Dryfus Affair, where a French Jewish Captain was found guilty of treason when he really was innocent.  Anti-Semitism, something very common in Russia,  had now reached this ugly level in France.  It hit many Jews in the heart that they needed their own state and the only desire was for Palestine.  Besides, Russian Jews tired of pogroms had already started going  back to Palestine in the 1880's to establish a homeland with the First Aliyah.  Uganda was suggested but quickly dismissed.  After all, many Jewish prayers speak of Jerusalem, Zion and the Land of Israel.  Jews are told not to forget Jerusalem, the site of the temple, which is a major tenet of Judaism.  The Jewish calendar, holidays and festivals all originated in Israel and revolve around Israel's seasons.  Jews pray toward Jerusalem and say the words, "next year in Jerusalem" every Passover since 70 CE.  The Jewish religion, culture and history make clear that it is only in the land of Israel that a Jewish state can be built.

In 1913 the Zionists realized that they needed an agreement with the Arabs if they were going to live in Palestine.  Sami Hochberg represented the Zionists in a meeting with the Cairo- Decentralization Party and the anti-Ottoman Beirut Reform Society and reached an agreement which led to the adoption of a resolution assuring Jews equal rights under a decentralized government.  He also got an invitation to the first Arab Congress in Paris June 1913.

They were most receptive to Zionist aspiration.  Hochberg was encouraged by they response.  Abdul-Hamid Yahrawi, the President of the Congress said, " All of us, both Muslims and Christians, have the best of feelings toward the Jews.  When we spoke in our resolutions about the rights and obligations of the Syrians, this covered the Jews as well.  because they are our brothers in race and we regard them as Syrians who were forced to leave the country at one time but whose hearts always bet together with ours, we are certain that our Jewish brothers the world over will know how to help us so that our common interests may succeed and our common country will develop both materially and morally."

Yet when the WWI broke out, Arabs were opposing the Balfour Declaration, convincing the Zionist leadership of the need to work harder to reach an understanding with the Arabs.  First Chaim Weizmann met with Said Shukeir, Dr. Faris Nimr and Suleiman Bey Nassif (Syrian Arab nationalists chosen by British as representatives.  He told them of the need to live in harmony with Arabs in a British Palestine.

Nassif said, "There was room in Palestine for another million people without affecting the position of those already there."  Dr. Nimr used his Cairo newspaper to dispel the misconceptions about Zionist aims.

World War I started on July 28, 1914. The Ottoman Empire sided with the Germans.   The Allied nations of Europe were planning the overthrow of the Ottoman Empire.  Along came the very secret  Sykes-Picot Agreement (Asia Minor Agreement) of November 1915  and signed on May 16,  1916 to control Western Asia  that involved Britain and France with the help of Russia for the results after the overthrow.  They would divvy up the land between the British and the French.  Russia later exposed their secret plan after the Russian Revolution in October 1917.  .

The Balfour Declaration of November 2, 1917, saying that the British government favors the establishment in Palestine of a national home for the Jewish people was accepted by no other than Emir Faisal (Feisal) ,  a descendant of Muhammed the Prophet, son of Sherif Hussein, the big leader of the Arab revolt against the Turks.  It came about after long negotiations started by Chaim Weizmann,  right after the outbreak of World War I.  In 1918 Weizmann met in Aqaba with Emir Faisal, son of Sharif Hussein of Mecca, the leader of the Arab movement, to discuss prospects of reaching an understanding on the establishment of independent Arab and Jewish states.  President Wilson of the USA supported the American Zionists, headed by Brandeis.  The document was approved by other Allied governments and incorporated into  the Mandate in 1922.  Faisal had signed an agreement with Chaim Weizmann and other Zionist leaders when they had attended   the 1919 Paris Peace Conference.

He had said, "Mindful of the racial kinship and ancient bonds existing between the Arabs and the Jewish People, and realizing that the surest means of working out the consummation of their national aspirations is through the closest possible collaboration in the development of the Arab states and Palestine."

Here we have the leader of the Arab nationalist movement and the Zionist movement reaching an understanding.  This demonstrates that Jewish and Arab aspirations were not necessarily mutually exclusive.

Evidently the ending of the Ottoman Empire that came at the end of WWI gave several Arab chieftans the inspiration to have their own statehoods, which now would be independent from the Turkish rule.  There was no immediate need for the Arabs like there was for the Jews, who had been suffering nothing but hardships and death by having to wander amongst the nations trying to find a home that never materialized.  The latest cause of the need came from the many pogroms that were happening in Russia's Pale of Settlement, where Jews had been confined.  The Arabs saw the opportunity after 400 years of Turkish rule and decided that they needed a piece of the action as well.  They were instigated by such as "Lawrence of Arabia,' too..

Here we have two plans running at the same time.  "Lord Balfour wrote a memorandum from the Paris Peace Conference which stated that the other allies had implicitly rejected the Sykes-Picot agreement by adopting the system of mandates.  It allowed for no annexations, trade preferences, or other advantages. He also stated that the Allies were committed to Zionism and had no intention of honoring their promises to the Arabs."

The agreement looked to the fulfillment of the Balfour Declaration and called for all necessary measures "to encourage and stimulate immigration of Jews into Palestine on a large scale, and as quickly as possible to settle Jewish immigrants on the land through closer settlement and intensive cultivation of the soil."

Faisal had conditions to accepting the Balfour Declaration and that was depending on the British wartime promises of independence to the Arabs.  As he later saw it, these were not kept, though many were rewarded with it, he felt he was not.  He had been planning to receive aid from the Jews in building his future kingdom and had met Dr. Weizmann in Transjordan in 1918 and Paris in 1919 where they had reached an agreement on mutual aid..  Later, because he was ousted from Syria by the French in 1920, and because of influence of the Palestinian Arab leaders, his attitude to Zionism became hostile.

What had happened in the battle of the Arab revolt (Arab Awakening) of June 5 1916 against the Ottoman Empire was that a Thomas Edward Chapman, brilliant but illigitimate son born in Wales in 1888 came on the scene in October 1916  to be known as Lawrence of Arabia.  Lawrence was the son of Anglo-Irish Sir Thomas Chapman b; 1846, 7th Baronet and his partner, Sarah Lawrence, also illigitimate born in 1861,  a Scottish governess,  and was related to Sir Walter Raleigh.  He met with Faisal and then managed to take the ill-disciplined Arabs and turn them into a fighting force of 3,000 against  50,000 Turks and win.  He and his force were under General Allenby in Palestine by December 9, 1917 when they entered Jerusalem. "

In 1919 Faisal led the Arab delegation to the Paris Peace Conference and, with the support of the knowledgeable and influential Gertrude Bell, argued for the establishment of independent Arab emirates for the area previously covered by the Ottoman Empire.

Lawrence accompanied the Arab delegation to the Versailles Peace Conference June 28 1919,  where they fully expected their reward for helping the Allies in the war - full independence. Britain and France carved up the Middle East into their own zones of influence and the French even ejected Faisal from Damascus."

Even the American Congress felt the public support for the Balfour Doctrine and a resolution  approving it was adopted in 1922.  In 1944 both national parties, Republicans and Democrats,  called for the restoration of the Jewish Commonwealth, and again in 1945, a similar resolution was adopted by Congress.

Faisal, or Faisal Ibn Hussein was born in 1885 in Saudi Arabia and died in 1933.    His father, Hussein, was sherif of Mecca, Arabia.  Faisel had dreams of creating pan- Arab nationalism.  Faisal  was the leader of the rising against Turkey from 1916 to 1918 and then became the king of Syria. only to be ousted by the French in 1920 because  Faisal's Arabs and the French fought each other, ending Faisal's reign quickly. The French then held the Syrian mandate.  He  did become king of Iraq in  1921.

Iraqi independence came in 1932, but came with lots of persecution of Jews who lived there, mainly in Bagdad.  Hundreds were killed and wounded in a pogrom in 1941.  Iraq had been one of the nations attacking Israel in 1948.  123,500 of the Iraqi Jews then moved to Israel in Operation Ezra and Nehemiah.  All their property in Iraq had been taken by the government.  Only 150 Jews were found there in 1991.

The Arab Higher Committee, a central council of the Arab National Movement in Palestine from 1936 to 1948 were led by the mufti of Jerusalem, Hajj Amin el Husseini.  Their aim was to fight Zionism and the Palestinian Jews.  They were outlawed by the British mandatory  government in 1937 as they organized riots and killings in 1936.  The leaders were exiled to the Seychelles, islands east of Africa.  They re-established in 1945 and again caused riots and killings in 1947-1948.  After Israel was established in 1948 the king of Jordan did away with the committee, but the mufti tried to revive it as the Palestine Government in the Gaza Strip.

Here we had had Chaim Weizmann and his discoveriy and invention to produce acetone. Acetone was used in the manufacture of cordite explosive propellants critical to the Allied war effort.
Without this, neither the British, French nor Arabs would have won,  along with the extra soldiers provided through Lawrence of Arabia who took Palestine.  Both  the Jews and the Arabs were cheated out of what they had been promised, though the Jews did have a written Declaration over what the Arabs had presumed would be their reward for their outstanding fighting.   In the end the Arabs were given far more of the Ottoman Empire than what they had dreamed of and sooner than the Jews. Suprisingly, they refused more than half of the share offered to the Jews because they wanted it all.