The Big Lie: That Arabs Were Displaced By Israel 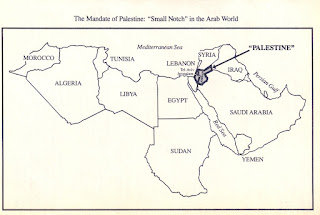 Mandate for Jewish National Home
Nadene Goldfoot
The Jewish Homeland shrunk to less than 20% of its original size which had been decided by the Balfour Doctrine and okayed by the League of Nations.  What became Israel in 1948 was a fraction of Western Palestine where Jews had already settled and had been living.   Immigrant Jews had returned to the land in the 1870's to join the small native Jewish population and until it became a state in 1948, the area of Jewish settlement remained about in the same area.  It had been underpopulated land and had been set upon by Bedouin exploitations, plunder, nomadism , tribal uprisings and natural disaster during the Jews' first aliyah or return to work and reclaiming of  the land.

The major part, 3/4  of the Jewish Homeland, had been taken over by Transjordan, which was land east of the Jordan River.  Yasser Arafat had stated that Jordan is Palestine.  Even King Hussein and Prince Hassan of Jordan have also stated that Palestine is Jordan and Jordan is Palestine.  That happened to be a good 80% of land promised to the the Jews. In fact, Palestinian Arabs and Jordan had a battle in 1970-1971 called the "Black September" period, when King Hussein fought against Arafat's PLO forces who had been operating opening in Jordan until then.  It was considered a Civil War and the final crackdown against those of his people who were trying to establish a separate Palestinian state under Arab Palestinian rule instead of his own.

The king considered them criminals and conspirators using commando movement to disguise their treason and plots to destroy the unity of the Jordanian and Palestinian people. Thousands died, mostly the Palestinians who later retreated to Lebanon.   It was a similar situation to Syria today, only the king was fairly good and not about to be undercut and displaced.  He eventually married a Palestinian girl, born in the USA whose father was from Syria, Queen Noor, one way to keep the peace.  One good thing about him, he kept the peace with Israel.  King Hussein has since died, and his son, King Abdullah II also married a Palestinian girl, Queen Rania, born in 1970 whose father was from Kuwait.

The Jewish National Homeland had been split into 2 separate unequal Palestines:  Eastern Palestine--or the Arab emirate of Transjordan east of the Jordan River and Western Palestine, which was less than 1/4th of the League of Nations Mandate.  Where the Jews actually lived in 1870-1880 was only a segment of the area of Western Palestine.  Transjordan, nearly 38,000 square miles,  had been filched by the Arabs with the British permission and assistance.  Israel got less than 8,000 square miles in the end.

The land of Transjordan had been conqauered by King David.  W Ammon was held for a time by a Jewish family, the Tobiads.  From the 8th century to the 19th century it had been mostly left to the Bedouin except when the Crusaders were there.  In 1921 it was detached from the Jewish Homeland for Abdullah who renamed it the Hashemite kingdom of Jordan in 1946.  In 1948 he took over the Arab area of Palestine which his grandson, Hussein lost to Israel in the 6 Day War.  In 1990 Jordan's population was 3,000,000 of which many were Palestinian Arabs and its capital is Amman.  By 2011 the population of Jordan was 5,568,565 and 95% Sunni Muslim which is their state religion.

The Muslim population in "Palestine around 1917, the time of the Balfour Declaration, was made up of mostly transient and landless nomads.  Sherif Hussein commented in a 1918 article that the native soil of Palestine could not keep the Arabs from " wandering....in every direction."

Palestine did not become Israel.  Israel is but a sliver of what it was to have been.  Palestine was indeed to have become the Jewish Homeland but because of British dealings, it didn't happen.  It should have been the land east and west of the Jordan River from the Mediterranean to Arabia and Iraq, and north and south from Egypt to Lebanon and Syria.

Arnold Toynbee, historian, said in 1918 that the "desolate land which lies east of the Jordan stream was capable of supporting a large population of irrigated and cultivated scientifically.  The Zionists have as much right to this no-man's land as the Arabs, or more."

The land was previously referred to as Palestine, and that was but a small piece of land compared to Arab countries created around it.  It was also called South Syria, or Eastern and Western Palestine, or part of Turkey, but by the international mandate known finally as a Jewish National Home.  The USA mentioned much about it, and said it was to "recognize Palestine as a Jewish state as soon as it is a Jewish state in fact."

So all around it independent Arab statehood arose., but not within Palestine itself, unless you count Transjordan.  After WWI the Arabs in Syria and Iraq had statehood.  Saudi Arabia got about 865,000 square miles of land which was pure Arab land.  Surely the Arab would not begrudge the "small notch" of Palestine east and west of the Jordan River, thought Lord Balfour.  Little did he know his own country and the Arabs.

Britain had to help themselves by recognizing Abdullah and his emirate in the land east of the Jordan River that was to be the Jewish National Home.  He was the royal son of the Hejaz (Saudi Arabia), because the Arabians of the Hejaz had been the biggest helpers against the Turks in WWI.  His brother, Emir Feisal, and Lawrence of Arabia had agreed to abandon all claim of his father to Western Palestine if Feisal got Iraq and Eastern Palestine as Arab territories.  Never mind that Chaim Weizmann had developed chemicals to create bombs that worked for England and with that they would have lost the whole war against Germany and had been promised the land first for the Jews in return for his contribution to the war effort .

So this idea of Jews displacing the Arab is nothing but bunk.  Arabs actually took over land meant for the Jews by taking Transjordan illegally. Folke Bernadotte in 1950-1951 said that "The Palestinian Arabs have at present no will of their own.  Neither have they ever developed any specifically Palestinian nationalism...It would seem as though in existing circumstances most of the Palestinian Arabs would be quite content to be incorporated in Trans-Jordan."

Posted by Nadene Goldfoot at 5:26 PM