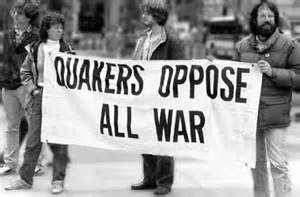 Why does this Christian group of Quakers  have it in for the Jews?  This Protestant group,  started in 1654 by George Fox,  has developed into an anti-Israel sledgehammer.  They have planned a veritable war using BDS against Israel and are extremely pro Palestine and anti-Israel.  For a people saying they are pacifists, this is quite a turn-about.  This is extreme anti-Semitism to the point of training people to  fight against us better through the use of BDS.  They are very much activists against Israel who side with the Palestinians.

The American Friends Service Committee, also known as AFSC, is the political arm of the Quaker movement.  They hare planning to hold a Boycott Divestment and Sanctions (BDS) summer camp in New York on July 28th to August 1st.  The description is a "5 day intensive program for campus BDS organizers.  There are those leaders who have campaigns running already and those who are hoping to get one launched  in the 2013-2014 school year.

They will include anti-Israel activities such as developing their campaigns, organizing, anti-oppression analysis, nonviolent direct action developing , study of history of BDS movement which started in 2005, woriking with activists, strategy sessions with leaders, and to get the pro-Palestinian students to organize better targeting Israel, boycotting products from Israel, passing divestment resolutions and pushing that Israel is an apartheid regime.

How nice.  My thought is who are these leaders?  They sound like Nazis to me.  One giant truth stands out.  Israel is not an apartheid state but the total opposite of the very meaning.  Since they are planting such a viscous lie, what about everything else they are teaching?  Pure anti-Semitism!

Why would such a part of Christianity act in such a way?  Their beginnings included people being hung in Salem or at least being outcasts for being these different Quakers.  I even found a Quaker on my mother's branch of our genealogy tree and went to the funeral get-together of the celebration of his life.  How those  distant Quaker relatives would have screamed if they knew that they had a Jew hanging on their tree.  I gave them a whole line of my genealogy searches leading to them as well, being a nice person.    So I am very disappointed to find out that Quakers are leaders in this BDS movement.

There are people who see something and do not have the background to interpret it without a study of the history that brings about the visual experience. There are many groups and people such as  "British Foreign Secretary William Hague, who are pressing Israel not to go all out on Hamas, while Khalid Mashaal, head Palestinian,  calls for the destruction of Israel.  This comes even though Hamas has been raining rockets, missiles and mortars down on southern Israel since 2001 and there has only been a brief let up at the end of 2012.  The whole truth of Israel being rightfully there as a state is ignored in their fight against Israel.  What they see is what they figure to be the poor underdog, throwing rocks against Jews with unlimited weapons.  This is only what they want to see, not the truth.

One minor piece of propaganda being used could be the old diary of Nancy Parker McDowell which the Quakers are printing off.  She was a teacher in Ramallah which was under control when she taught there from 1938 to 1939.  The British were tough against the Palestinians there as she wrote.  She didn't know what was going on against the Jews.  But she saw the Arab as the underdog then.  It had nothing to do with Jews, but now that the Jews are fighting these same people, she sees them in the shadow of the British meanies.

The Quaker Friends Fiduciary Corporation (FFC) is divesting from Hewlett-Packard (HP) and Veolia Environment.  This came about from "reaction to demands from “Palestinian rights advocates.”  Heavens, they simply wouldn't be caught listening to the Jews' side of the situation.  "There are only about 80,000 Quakers in North America.  Their spokespersons are heatedly anti-Israel. Quakers are traditionally pacifist of course.  But Quaker ire does not typically focus on Hamas or Hezbollah terror, nor on the violent threats of Israel’s neighbors."  No, evidently they just don't like Jews.

"The Religious Society of Friends is a movement that began in England in the 17th century. Members of this movement are informally known as Quakers, a word that means, "to tremble in the way of the Lord." In its early days it faced opposition and persecution;  however, it continued to expand, extending into many parts of the world, especially the Americas and Africa.


Mary Dyer was thus executed in 1660. Three other martyrs to the Quaker faith in Massachusetts were William Robinson, Marmaduke Stephenson, and William Leddra. These events are described by Edward Burrough in A Declaration of the Sad and Great Persecution and Martyrdom of the People of God, called Quakers, in New-England, for the Worshipping of God (1661)In 1657 a group of Quakers from England landed in New Amsterdam (later called New York). One of them, Robert Hodgson, preached to large crowds of people. He was arrested, imprisoned, and flogged.

Quakers do differ from other Christians in that they actually are closer to how Jews believe in many respects. They  profess to bring about  peace, integrity,  humility, and community.  They have no written creed.

Bible - Quakers' beliefs stress individual revelation, but the Bible is truth. All personal light must be held up to the Bible for confirmation. The Holy Spirit,  who inspired the Bible, does not contradict Himself.
Heaven, Hell - Quakers believe that God's kingdom is now, and consider heaven and hell issues for individual interpretation. Liberal Quakers hold that the question of the afterlife is a matter of speculation.
Sin - Unlike other Christian denominations,  Quakers believe that humans are inherently good. Sin exists, but even the fallen are children of God, Who works to kindle the Light within them.

"Historically, the Society of Friends has endorsed strong moral codes including the refusal to participate in war, the refusal to own slaves, and the elimination of many worldly structures. Socially, they were committed to various causes including women's suffrage, the abolition of slavery, and prison reform."  In other words, from their inception, they have been activists in social affairs.  Though they had picked very worthwhile causes in the their past, I do not agree with their siding with the Palestinians at all, being an Israeli Jew myself; for I know all our history and why we have this fight on our hands with the Palestinians and they do not.

The way it comes down, since the USA support Israel's rights, the Quakers have taken the Palestinian's side. They have done it out of emotion, not out of intellect or facts, much like so many others have done.  We still find people accusing Jews with "the blood libel" even though blood is something forbidden to us in our religion and many will go through hell and high water before touching anything non kosher or that has any blood in it, but people are believing it anyway.  It's just easier to pick a side and hate and accuse rather than bother to dig up facts to prove otherwise.  In looking at the hearts of people, I find very few defenders of Jews except with the followers of Pastor John Hagee, of the Evangelical Christians.

I am appalled at any source that would impugn or denigrate others with no way to validate nor to refute the printed material presented. Quakers have NEVER BEFORE THIS been accused of being anti-Semitic.....to do so would immediately identify them as non-Quaker. The belief structure of those who embrace the Religious Society of Friends simply does not allow for discrimination against the beliefs of ANY religious (or non-religious, for that matter) group. Some of the information presented by Nadene Goldfoot was accurate, whilst her opinions contained in this blog are obviously politically motivated - which has absolutely nothing to do with religious belief or, for that matter, with any feelings or beliefs about Jews. And to interpolate any differently is clearly misleading at the very least and downright vicious biased at worst, which can only be describes as anti-Quaker. Shame on you, Ms. Goldfoot, for your misguided attempt to disparage probably the only religious group in world to NEVER, ever cast negative aspersions on Jews over the past 365 years of Quaker testimony on the equality of all persons. And whilst you are about it, check out the roles of Rufus Jones, George Walton and D. Robert Yarnall and their mission to Germany to try to find a peaceful way of dealing with the Nazis - which resulted in hundreds of Jewish children being saved just in advance of the Nazi invasion of Poland. and yes, some of our most distinguished Quaker leadership has led to several peace- oriented effors in our own time, including secret QUNO meetings between Palestinian and Israeli leaders that led to the original agreements of the 1990s. And as for Ramallah and Brumallah Schools, they have been just about the ONLY source of moderate leadership over thae past five or six generations in the Arab world, because of the superior Quaker educational principles and philosophy that promote tolerance, acceptance and the rejection of violence as a legitimate method of deling with disputes.
And for the record, I have had three Jewish sons-in-law, and now proudly have four Jewish-heritage grandchildren, two of whom are third-generation from holocaust survivors. Oh, and BTW, even though I agree wholeheartedly with the statement attributed to Pope Francis, as one of the many non-Cristocentric Quakers, I find your definition of what and who Quakers are to be sadly out of date and certainly not in keeping with modern Quaker thought or practice.