Operation Defensive Shield in Jenin and "Jeningrad" and Samantha Power 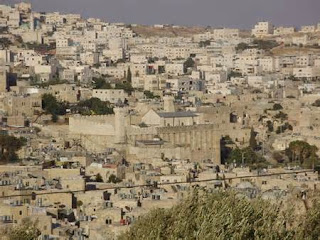 The Jenin refugee camp was created in in Judea-Samaria in 1953 within the city of Jenin's boundaries on land that the UNRWA leased from Jordan.  It was home to 13,055 Palestinian refugees.  Most of the people living there were from the Haifa area and the Carmel mountain district and had relatives inside the "Green Line."  Other residents there were from Gaza and Tulkarm who moved into the area in the 1970's, and of course there were those form Jordan who moved there when the Oslo Accords were signed in 1993 and when the PA was established.

Jenin had become a hotbed of terrorist activity.  From April 1-11, 2002, Israel had gone into this refugee camp as part of Operation Defensive Shield to halt terrorist activities and it turned into a battle referred to by some as a massacre.  About 52 Palestinians were killed of which the majority were fighters and 23 IDF soldiers.  PLO Chairman Yasser Arafat praised people of Jenin saying that their battle paved the way to the liberation of the "occupied territories."  This battle became known among the Palestinians as "Jeningrad."

Just on March 27, 2002 during Passover, a Palestinian Hamas suicide terrorist killed 30 people at the Park Hotel in Netanya and injured 140 people, one of many terrorist attacks happening in Judea and Samaria.

Israel had discovered  labs and factories that were making bombs and rockets, such as the Qassam II were within Jenin.  When the IDF troops entered, they found the Palestinians well prepared. Israel had some indications it was going to be hard-going but they weren't prepared to find how hard it really was.  Israel knew of 23 suicide bombings and 6 attempted bombings that came from Jenin.  This included the Matza restaurant suicide bombing.  They blamed the Hamas and Palestinian Islamic Jihad and Fatah on these who were in Jenin.

Camp militants had taken over the authority and Israel wasn't quite aware of how bad it was because of its location compared to other camps.  In February, residents had burned 7 vehicles from the governor of Jenin and even had opened fire on the Palestinian Authority men.  Ata Abu Rumeileh became the chief security officer of the camp and oversaw the entrances, instituted roadblocks, and kept strangers away.   The camp became known as the martyrs capital.  They had about 200 armed men including members of Al-Aqsa Martyrs Brigades, Tanzim, Palestinian Islamic Jihad and Hamas.  There were 28 suicide bombers sent from the camp from 2000 to 2003 during the 2nd Intifada.  Mahmoud Tawalbe was a key planner who worked in a record store while chairing the local PIJ cell.  31 militant attacks that took 124 lives came out of Jenin, more than any other city in the Judea-Samaria vicinity.

If Israel was like other countries, they could have bombed the camp of Jenin from a safe distance and starved the terrorists out.  They chose to enter and not harm civilians.  This is their way.  First they announced that the people should leave as they were coming in.  When they did enter the camp they went from house to house to avoid civilian casualties, not to inflict them.  To their disappointment, terrorists were deliberately hiding behind civilians.  Senator Joseph Biden, May 6, 2002.

When the terrorists saw the Israel Infantry entering, they felt the fight was going to be like hunting.  One remarked that he couldn't believe it when he saw only soldiers.  They knew they could easily get killed when they entered.  It was a very hard fight because they fought at close quarters with only a few meters between the combatants.  Sometimes they fought in the same house.  Thabet Mardawi, Islamic Jihad terrorist, captured in Jenin.

The IDF regularly puts themselves at risk in order to reduce the risks that they might pose on  civilians.  There have been very small numbers of civilian casualties despite the fierceness of the fighting.  Professor Michael Walzer, Princeton U, 2002

Evidently it was this battle that caused Samantha Power, who was influenced by Michael Ignatieff from Harvard, to proclaim that Israel needed to be invaded by American troops.