Is Samantha Power, Selected to be Ambassador to UN, A Fair Person? 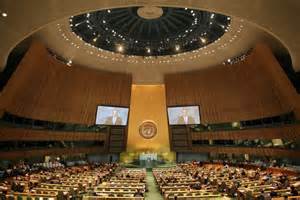 UN, General Assembly, New York, New York, USA
President Obama has announced that he will nominate foreign policy confidant Samantha Power, a pro Palestinian  and anti-Israeli human rights speaker,  to replace Susan Rice as the US ambassador to the UN.  This is pretty earthshaking news as she inferred  in 2002 about the need to invade Israel!  She has been connected to Obama for a long time.  In 2008 she was forced to resign from his campaign because of her negative remarks she made about Hillary Clinton. She is to take office in July, 2013.

I have the website for her 3 minute long 2002 interview with Harry Kreisler of Berkeley University asking her questions as first on my list below, but here is a rundown of what she said and felt.  She was asked that if she were the advisor to Obama, what would you say to him. Her answer was shocking being that Israel is the one and only democratic state in the Middle East and has been called a friend of the USA by other presidents since Harry Truman.

She advised to invest in the new state of Palestine in the amount of billions of dollars that it would take to have a mammoth protection force that was meaningful.  She seems to be worrying about their genocide from Israel, not the other way around.  She thought that both political leaders (Arafat and Sharon)  had been dreadfully irresponsible and the situation requires external intervention.   She wanted to put something on the line which might mean alienating a domestic constituency (Israel) of tremendous political and financial import (support to Israel).  It's plain to see who she is already bent to support.

Though today she disavows the clip, she obviously was referring to AIPAC, a pro-Israel lobby.  Her planning the backing of a "meaningful military presence" sounds like an invasion for sure.  When she was again interviewed, this time by Haaretz, an Israeli newspaper in 2008, she disowned her own comments that are on the video, copping out with saying that she didn't understand them and they sounded weird" even to her today.  Of course, there's going to be lots of backlash to this appointment because of that interview.  She's now bemoaning that the statement was made "some time ago" and now regrets them.  She then came up with, "Judaism teaches that a person is judged primarily by their actions."  She doesn't know about loshen hora, then.  Words hurt as much as bombs do many times over.

Samantha 43 years old, is an Irish American  writer that started her career as a journalist covering the Yugoslav Wars. From 1998 to 2002 she worked on Human Rights at Harvard where she she worked as a professor.  She was a senior adviser to Senator Barack Obama until March 2008 when she had to resign.  She is an immigrant from Dublin, Ireland and came with her parents at age 9 to Pittsburgh, Pennsylvania in 1979.  She went to high school in Atlanta, Georgia and graduated from Yale University.  From  1993 to 1996, she had a job as a journalist and then returned to the USA and graduated from Harvard Law School in 1999.

Her specialty in writing is human rights and genocide.  During her 2005-6 work for Senator Obama, she got him interested in the Darfur conflict.  Very young and having worked in a real job for only 6 years, I don't see anything on her resume saying she's an expert in the Palestinian Israeli conflict.  She seems to me to have already made a judgement against Israel if she felt they needed to be invaded and all monies must be spent on creating Palestine.  She's very one-sided in her decision-making without facts to back up her feelings.

Obama presents her as a woman who has been a relentless advocate for American interests and values.  So Israel doesn't count anymore with this administration as being one of America's interests or values?  Why is it that Obama never selects people who are pro-Israel?  Samantha is copping a plea and so are the reporters writing about her 2002 Freudian slip, if that is what it was.

Heavens, if she is still thinking like she did at age 32, she's be ready to invade Israel but not Syria, whose government has already killed off 80,000 or more in which the USA certainly has not invaded to set things right.  She doesn't get it in that it is the Palestinian Hamas terrorists who are terrorizing and trying to kill the southern Israelis with mortars, missiles and rockets.  We are wondering where the Human Rights people are  and never meet any except when Israel is forced to recapitulate to stop the attack and who  are noted by other army heads as doing it in a very humane way, more than others would.  It would help if she studied the situation, and not only from Palestinian propaganda.

May I suggest my favorite author, Joan Peters, reporter, non-Jewish, who also thought the Palestinians were being treated unfairly.  After she did a real job of researching such as a reporter should do, she wrote her book, From Time Immemorial and wound up advising presidents.  Now that was a reporter who deserves a prize!  She was not swayed by biased people, even though she went into the research with strong opinions.  She came to see the facts and printed them.  They reshaped her viewpoint.  Samantha!  Read her book!

This woman hates Israel....and so it goes!

She certainly said enough to make many of us agree with you, Jeff. She also erred in saying that Thomas Friedman used the word, "Sharafat" to refer to the two leaders, Ariel Sharon and Yasir Arafat. It was Amos Oz who coined the phrase.