Jews' Return to Their Land Sparked By Pogroms and Government Restrictions 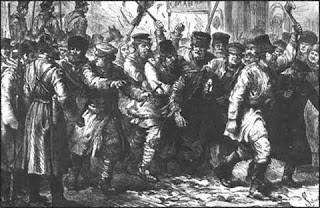 19th Century Pogrom in Russia
Ever since 70 CE, life was one event after another of persecution for Jews. 1096 saw Crusaders slaughtering Jews as they went through European towns on their way to take Jerusalem.  1492 was the year of the Spanish Inquisition and forced conversions of Jews in Spain.   In 1648 to 1656, 100,000 Jews were murdered in the Chmielnicki massacres in Poland.  In 1727 and 1747, Jews were expelled from Russia.   In 1838, the entire Jewish community in Meshed, Persia (today's Iran) were forcibly converted to Islam..

Jews finally had a formal emancipation in Central and Western Europe from the 18th to 20th centuries, but it did not put an end to discrimination and social ostracism of Jews. This was supposed to be the removal of the disabilities imposed on Jews that had been in place from the 4th century  on.  The Christian Empire enacted an elaborate system of discrimination against Jews which was adopted and intensified in medieval Europe as well as in the Islamic world.  It brought in the Ghetto system aiming at keeping Jews away from the gentile society.      The Dreyfus case in France was a good example of Jewish discrimination and anti-Semitism in 1894 when he was condemned to life imprisonment and ordered to Devil's Island. This led to the affect it had on Herzl and to the development of Zionism.

Continued oppression and outbreaks of pogroms in Eastern Europe were combined with extreme poverty for most of the Jews.  The Hep Hep riots against them began on August 2, 1819 in Wurzburg, Germany. Hep! Hep! was an anti-Jewish slogan used during these riots.  The cry was then said to be of Crusader origin, being formed from the initials of the words Hierosolyma est perdita (Jerusalem is lost).   This continued and reached Denmark, Poland, Latvia and Bohemia.  By 1821 Odessa, Russia  had pogroms against them.  This started up a wave of pogroms.  More occurred in 1859.

A new movement came out of all this suffering of returning to their land and of a revival of Jewish national life.  The Yishuv-the Jewish community already living in Palestine that had never left, started it all.  In 1860, they built the first quarter outside the walls of the Old City of Jerusalem.  Two Hebrew periodicals were regularly published in Jerusalem calling for a return to the Land.  It couldn't have happened at a better time.

In 1870, the first Jewish agricultural college was established in Mikveh Israel which today is on the outskirts of Tel Aviv.  Back in Russia, the next year of 1871 and non-stop until 1921 were years of anti-Jewish pogroms in the towns of Russia including the Pale.  By being in the Pale, it was so much easier to attack Jews.  It was no wonder that the early 1900's saw the immigration of over a million Jews.

By 1881 and subsequent years, Jewish immigrants that belonged to the Hibbat Zion (Love of Zion) movement arrived in Israel from Eastern Europe.  Meyer Levin's "The Settlers", a historical novel, tells about their arrival from the turn of the century to the Balfour Declaration and covers over a 1/4 of a century of turbulent events and their hardships as pioneers.  Some had joined existing villages while others founded new ones.  Some of the villages established during the last 2 decades of the century are large towns today; Hadera and Rishon Le-Zion, for example.

From  1882 to 1890, 750,000 Jews living in Russia were forced to re-settle in the Pale of Settlement; 25 provinces of Czarist Russia,  areas under Catherine II's reign of Poland, Lithuania, Latvia, White Russia, Ukraine, Belarus and the Crimea.  In 1891 Jews were then expelled from Moscow and St. Petersburg and sent to the Pale.

The Jews who returned to the Land during this period are known as "the First Aliya."  Aliya  literally means: going up-spiritually, ascent;.  In practice, it has come to signify immigration to Israel.   The conditions in which the first Aliya-and subsequent waves of immigration-settled in the Land were extremely harsh.  The population was small and dispersed.  Communications were poor and insecure.  The Land had been completely neglected.  Pioneers faced swamps,and with it,  malaria,  The Ottoman Empire, which lasted for 400 years by 1917, was hostile and oppressive towards both Arabs and Jews, which is probably  why the native Jews hadn't been able to keep up the land.  Life for these pioneers was a continuous ordeal and new villages survived precariously.

By 1897, Theodor Herzl organized the First Zionist Congress in Basle and founded the World Zionist Organization.  Zion  had been the traditional synonym for Jerusalem and for the entire land, so was the proper word to use.  A growing realization that Jews should follow the path of self-determination which other nations were following such as the Greeks, Italians and Poles.  Zionism became the national liberation movement of the Jewish people.  It's aims were to carry out the return of Jews to the Land and the revival in it of Jewish national life; socially, culturally, economically and politically.

So a 2nd Aliya came to Israel in 1904 to 1914 which reinforced existing villages and founding new ones.  The Yishus began to organize itself politically with socialist groups figuring prominently.  In 1909 the first kibbuts-Degania-was establish on the southern shore of Lake Kinneret.  That same year was when Tel Aviv was founded on the sand dunes outside of Jaffa.

Hebrew was becoming the principal language of the Yishuv with the emerging Hebrew literature.  Life was still harsh and many of the newcomers left.  However, by 1914, there were 85,000 Jews in the Land.  The Land became occupied by Britain 4 years later with the end of WWI and they governed it for 30 more years.  They left and Israel was declared a state on May 14, 1948.  .

After all the suffering Jews have had to endure for 2,000 years at the hands of the governments of the world, they finally passed the Balfour Declaration that gave Jews the right to have their own land back, a decision on November 2, 1917 with the League of Nations.   The promise on paper was given to establish the Jewish National Home, and now even that is in limbo with nations today with discrimination in the UN.  The struggle continues for rights and recognition in our own homeland.  This time we're not going to be driven out.

Resource: http://en.wikipedia.org/wiki/Pogrom
Facts About Israel by the Division of Information, Ministry for Foreign Affairs, Jerusalem 1973
Posted by Nadene Goldfoot at 5:40 PM