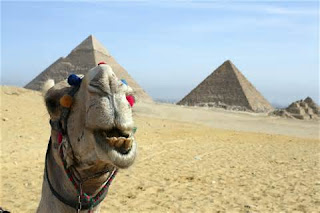 Can you make a silk purse out of a sow's ear?  Hardly.  You can only make a pigskin purse. Perhaps democratic principals come to people slowly.   Democracy came to the USA out of rare circumstances that have only been replicated by Israel in the Middle East, and is very hard to come by in Iraq or Egypt.  Egypt had been ruled by pharaohs for thousands of years.  A pharaoh is a permanent title of the king of Egypt in ancient times.  It meant "Great House." and originally referred to the royal palace, somewhat like we Americans refer to the "White House."

It took at least a 1,000 years for Englishmen to want something better than English law.  A group of religious zealots went to Holland out of their frustration with the Episcopalian state religion in England but became frustrated there as they watched their children speak Dutch instead of their language, English, which they wanted to perpetuate.  They didn't want their religious goals to be lost by their children, so braved the idea of sailing to a new world, much as we would think of taking a spaceship destined for some just found planet with oxygen.  Luckily, further ships brought to America's shores some very intelligent men who were able to write up a "Mayflower Compact", named for their first ship, that set the standards for their budding democracy.  Look at all the steps we've gone through to arrive where we are today in our politics of ruling over a vast territory made up of 50 states which has 3.79 million square miles with about 315 million people. Out of the population are about 6 million Jews or 3% of the population.  We went from 1620 to 1776 with our constitution which continues to be embellished.

Suddenly,  our marvelous country, which is the 3rd largest in the world,  made up of all the ethnic people of this planet expects Egypt to suddenly follow suit and have a democratic way of ruling in their first encounter with democracy with Mohammed  Morsi, head of the Muslim Brotherhood.  He didn't have the heart for it.

The USA is the first country on earth to give Jews a chance of survival.  After living here since the beginnings of the budding USA, Jews have been able to meld  USA democracy with the Torah's expectations of Democracy for Israel.  Israel is a miniature USA made up of Jews from all over the world as well as including other religions in its fold with equal rights while still being a Jewish country.  The USA is a Christian country established by Christians.  It follows customs of Sunday being a day of rest and all the national Christian holidays meaning they are days of vacation for students and federal workers.  Egyptians tried it for a year and that was enough with the man they had elected.  They were losing their rights with him.

Egyptians are facing about 6,000 years at least of a strong type of a one-dictator  leadership, from Pharaohs to Shah rulers of the Ottoman Empire to being under British rule.  President Anwar Sadat (1918-1981) was their last most reasonable ruler as President from 1970 to 1981, but even he saw that he was under the thumb of the Arab League when Egypt was banned from its membership because of his November 1977 trip to Jerusalem and made peace with Israel. This was even followed up with the Camp David Accords which shattered the fragile unity of the Arabs.

However, Sadat signed a peace treaty with Israel in 1979 before he was assassinated by Muslim Brotherhood, a group of Islamic fundamentalists, in the midst of the October War celebration  in 1981 while reviewing a military parade in Cairo.  Vice-President Husni Mubarak, who took over, kept the peace, even though he was a tough dictator with his people.  In due time he himself had been elected as President of Egypt.  He punished Sadat's murderers, the Muslim Brotherhood after a noisy public trial and released Sadat's political prisoners and invited them to the presidential palace for discussions.  He continued Sadat's Open Door policy and stressed the need for greater productions.  He continued relations with Israel and presided over Egypt's repossession of the last section of the Sinai.

Mubarak wasn't enlightened like Sadat was, but  tried to cultivate the friendship of the Soviet Union and the Arab states.  Egypt got back into the Arab fold when the Israel-Lebanon war occurred in 1982 which Egypt had protested about and recalled its ambassador from Tel Aviv.   Getting back into the Arab world, evidently  wasn't good enough to solve Egypt's problems more  than Sadat or Nasser had done.  Whereas Sadat had outlawed the Muslim Brotherhood, of which Morsi was the head of, suddenly we find him "democratically voted in" and in power, and with this power turned the tables and had Mubarak up for charges and jailed.

Islamists feel that Sadat should never have signed a separate peace treaty with Israel.  From their viewpoint, Sadat was a practicing Muslim and should have known the close connection of Islam with Arabism and the emotional attachment of all Muslims to "Jerusalem", if not to Palestine.  This is how the Arab world sees it today.  This is where Morsi was in his thinking.  Only the money coming in from the USA probably kept him from attacking Israel with promised American jet fighters on the way to become a part of Egypt's arsenal. 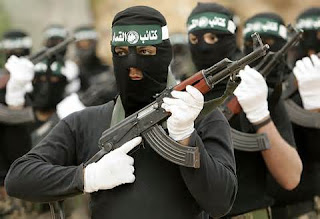 Muslim Brotherhood Party Fighters
After a year of the Muslim Brotherhood's main man, Morsi, Egypt has had it and the Military took over on July 3rd, a little better than a week ago.   Our White House and Turkey are pushing for the "democratic steps" of waiting and voting in another and not taking over with a coup or even a soft coup, as the military calls it.  The USA cannot legally give money to a country that has had a coup.

It's like a school who has a first year teacher hired on a trial basis.  If he or she receives a lot of bad reports from the principal, she is not re-hired.  However, Egypt and other countries have the ruling of a country that is stuck with a lemon for 4 years and then they can have another to rule the country.  Egypt found the Muslim Brotherhood to be intolerable and decided they couldn't wait for 4 years.  They had made a mistake and are bound to do the job over again.  Which makes me wonder about the validity of the democratic election in the first place.  How was it that they did not know of the dangers of a Muslim Brotherhood rule?  They had gone from a very secular state to Sharia Law with the Brotherhood.  It was too much.

Former UN ambassador John Bolton just wrote an article in which he lamented the downfall  of former Egyptian President Hosni Mubarak, who he said "understood his country better than the Western know-it-alls."  To have pushed for democracy in Egypt during this Arab Spring was stretching a country who was peaceful with its neighbor, Israel.  Uncorking the Muslim Brotherhood out of  the genie bottle was their error.  To make matters worse,  by backing  this group, whose charter calls for the destruction of Jews and Israel and the taking over of the United States is absolutely shocking.

Morsi (b: August 8, 1951) was the chairman of the Freedom and Justice Party which was founded in 2011 during Egypt's Revolution by the Muslim Brotherhood.  On the 24th of June 2012, he became Egypt's first "democratically elected" but 5th president of Egypt.  Supposedly he had 51.7% of the votes against Shafik's 48.3% in the election.  Shafik was the prime minister  of the Mubarak government.  It was "after Morsi temporarily granted himself unlimited powers to "protect" the nation in late November 2012' people began to immediately protest.  The whole idea of a democracy is to get away from a one-man rule and clever Morsi just brought it on to himself.

Now that the Muslim Brotherhood has lost face by being ousted, their followers are taking it out on the Christians who live in Egypt. " The attacks have hit across the country, in the northern Sinai Peninsula, in a resort town on the Mediterranean coast, in Port Said along the Suez Canal and in isolated villages in upper Egypt.  A new wave of violence has been unleashed.  The Brotherhood blames them for having supported the calls to overthrow Morsi.  Brotherhood members have shot dead a priest in the street and have painted black X's on Christian shops to mark them for arson.  Angry mobs have attacked churches and seized Christians in their homes.  4 Christians were slaughtered with knives and machetes in one village last week after the Military coup.

The 2011 revolution alarmed many Christians that overthrew Mubarak.  Coptic Christians are a small minority of the country and did not foresee what could happen to them. Egypt is made up of about 80,000,000 people of which 90% are Sunni Muslims.  Islam is a state religion.   Most all Jews have moved next door to Israel.

The scuttlebutt now is that Morsi escaped from prison during the 2011 revolution with help from Hamas.  I wouldn't be surprised being they both share the same charter in dealing about Israel and Jews.  Egypt's prosecutors are now investigating these allegations.  Chief prosecutor Hesham Barakat has testimonies from a court in Ismailia who are looking into the jailbreak by Mohammed Morsi and 30 other Muslim Brotherhood leaders.  If this proves to be true, legally it can lead to showing proof of foreign intervention on Egyptian soil that leads to treason charges.  Morsi is now kept  in an unknown place, and no charges have been filed as yet.  Hamas is denying the allegation of January 29, 2011 jailbreak at the Wadi-el-Natrun prison NW of Cairo.

What our USA is finding fault with now is of the Egyptian military and interim government's arrests of Morsi's supporters.  The continued detentions are inconsistent with pledges of inclusivity made by authorities and may affect  future monies from the USA.  Ongoing arrests of the Muslim Brotherhood members are troubling to democracies.  The neighbor most affected and seriously watching is Israel.