The Revolt Against Syrians By Jews; the Hasmoneans

Israel was divided in half in 933 BCE when King Solomon died.  The southerly of the 2 kingdoms was Judah and the northerly kingdom remained as Israel.  The last king of Judah was Zedekiah who ruled from 597 to 586 BCE.  This is when the Babylonians attacked and large numbers of the inhabitants were deported.  An attempt to perpetuate a subject state was made under Gedaliah, a member of the former royal house, who became governor of Judah by being appointed by the Babylonians after the destruction of the 1st Temple in 586 BCE.   His rule ended with his assassination  in 582 BCE by the commander Ishmael ben Nethaniah and his followers who were planning a revolt against Babylon.  Gedaliah's supporters then had to flee to Egypt for safety.  .

The descendants of the exiled Jews living in Babylon continued to love their national and religious ideals. Their condition improved when the ex-king Jehoiachin was let out of prison and was given the royal honors in 561 BCE.   After 538 BCE the exiled were able to renew Jewish life and return to the area of the former kingdom of Judah because Cyrus of Persia permitted them to return to Judea if they wanted.  He had just overthrown Belshazzar of Babylonia.   They had been kept away for about 70 years.     The canonical prophets carried on their activity and great parts of the Bible were composed and the essential traditions of Judaism were developed and preserved during  this period.

The Hasmoneans were a priestly family and dynasty founded by Mattathias of Modiin in Israel.  The priestly line was started by Aaron, brother of Moses.  They were probably called Hashmonai (Hasmonean) after his ancestor, Hashmon, but  the name could have come from a place-name found in Josh.5:27.

Mattathias was a patriot, a priest and a landowner of Modiin. He had 5 sons; Judah the Maccabee, Jonathan, Simon, John, and Eleazar. Mattathias killed the royal official who was sent to make the Jews worship Zeus.  This was the focus of the revolt of his sons against Antiochus Epiphanes.  Mattathias was the leader of the revolt and was staying in the Judean hills and waged a guerilla war on the Syrians.  He was killed and his son, Judah the Maccabee, took over.  He was later called the Hammerer because he hammered away at the Syrians.  We remember Judah and his brothers being victorious over Antiochus Epiphanes and their rededication of the Temple that the Greeks had taken over.  They had placed statutes of their gods in the Temple which was for the one and only unseen G-d of Abraham, Isaac and Jacob and all the people that believed in one G-d who came to be known as the Jews.  We remember these brave brothers during Hanukkah, which always happens in close proximity to Christmas.

Antiochus was the name of 13 Greek kings of the House of Seleucus who ruled Syria in the Hellenistic Period.  Antiochus III reigned from 223 to 187 BCE.  He transferred 2,000 Jewish families from Babylon to Lydia and Phrygia.  He captured Jerusalem in 198 BCE and treated the Jews with understanding.  Antiochus IV Epiphanes followed him and reigned from 175 to 163 BCE.  He fought against Egypt in 168 BCE but was turned back by Rome in his 2nd expedition.  He occupied Jerusalem, plundered the Temple treasure and tried to Hellenize Judea by force in order to convert it into a frontier-province that was reliable. 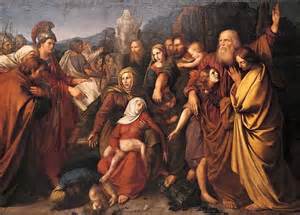 The Hasmoneans were rebelling against the hellenizing policy by the Syrian king Antiochus Epiphanes.  It was from 166 to 164 BCE that the Hasmoneans fought a number of successful battles against the Syrians which caused the Syrians to fight back against them with great cruelty.  Thousands of Jews were killed and many were sold into slavery.  Antiochus E.  brought in gentile settlers into Jerusalem and fortified the Acra as a stronghold of the Hellenizers to rule the city.  Then he began a religious persecution of the Jews, and forbid circumcision and the observance of the Sabbath.  He desecrated the Temple altar and set up pagan altars in other towns and compelled the Jews to take part in pagan ceremonies.  This caused the Hasmonean uprising.  His son, Antiochus V reigned from 164 to 162 BCE and continued the war against the Jews until 163 BCE when he granted them religious and some political autonomy in return for their acceptance of his rule.  In 164 BCE, however, Judah had captured Jerusalem back and rededicated the Temple.

This was followed by a series of raids to rescue the Jewish populations of Ammon, Idumea, Gilead and the Galilee They were defeated in 163 at Bet Zechariah where Eleazar was killed.  The Hashmoneans were able to obtain terms securing Jewish religious freedom, but Judah and his party, aspiring for political freedom also, continued the fight and Judah fell at Elasa in 160 BCE.  John was murdered shortly afterwards and Jonathan took over the leadership.  He was able to secure the high priesthood and governorship of Judah in 150 BCE.  Simon succeeded in gaining exemption from tribute by 147 BCE and was confirmed by the people as hereditary high priest, ethnarch and general in 142, but was murdered in 135 BCE.

His son, John Hyrcanus, who succeeded him, suffered a crushing defeat by Antiochus VII Sidetes.  Jerusalem was taken by the Syrians after a prolonged siege and Judea once more became a Seleucid province.  After the defeat of Antiochus in his war against Parthia, John launched a successful offensive against Transjordan, Samaria and Idumea, which marked the change of the Hasmoneans to a semi-Hellenized secular military dynasty.  This led to his adherence to the aristocratic Sadducee party.  He was succeeded by his sons Judah Aristobulus (105-4) and Alexander Yannai (104-76), one of whom was the first to adopt the royal title.  .

Josephus (Flavio Josefo) told of an argument recorded in 63 BCE between the father, John Hyrcanus and his son, Judah Aristobulus, about winning the favor of Pompey and get the scepter of his people.

Pompey (106-48 BCE) was a Roman general who arrived in Syria in 65-3 BCE and became the arbiter in a dispute between Hyrcanus II and Aristobulus I (104-103 BCE)  for the throne of Judea. Aristobulus  was the eldest son of John Hyrcanus and was to have been high priest with the administration of the state of Judah being left in his mother's hands.  However, he murdered his mother and his brother, Antigonus and imprisoned his other brothers.  He then extended the northern boundaries of Judea.  He was an admirer of Greek culture and called himself Philhellene.

Ultimately Pompey favored Hyrcanus II.  He captured Jerusalem and the Temple from Aristobulus' supporters.  He left the shrine intact, although he entered the Holy of Holies.  The state of Judea was made a tributary and stripped of the territories acquired by the Hasmoneans.  Aristobulus and his family were taken to Rome to grace Pompeys triumph.  Pompey terminated Jewish independence that had been enjoyed since Simon the Maccabee.

Either the father or his son had accused the other of encouraging piracy.  There is evidence of Jews who fought pirates in the 1st century before the common era, or 100 BCE.  This was written about by Jose Chocron Cohen in an article written for the Center for Sephardic Studies in Caracas. Flavio Josefo told about Hebrew sailors in Roman ships that fought against attacks from the port of Jaffa.

The 2nd son of John Hyrcanaus, Alexander Yannai (104-76),  set up a standing mercenary army and conquered Transjordan, Idumea and the coastal plain.  He was against the Pharisees who opposed his war policy, and this led to a civil war in which he was the winner.  Yannai's widow was Salome Alexandra (76-69).  With her death, the Hasmoneans declined.  Her sons, Hyrcanus II and Aristobulus II had a lot of strife which led to the intervention and eventual domination of Antipater and his son Herod, with Roman assistance.

Pompey reduced the country's territory in 63. He had seized the Temple in Jerusalem.  This is when, after a civil war, the 2 brothers appeared in Damascus to urge their claims before Pompey  Hyrcanus became king after his mother's death,  but Aristobulus II had usurped the throne.  He remained a puppet, while the efforts of Aristobulus II and his sons, Alexander and Antigonus Mattathias  tried to regain power but failed to do so.However,   Aristobulus II the younger son,  reigned from 67-63 BCE as King of Judea.

When Julius Caesar rose to power, Aristobulus II was released from prison in 49 and was promised 2 legions with which to attack Pompey's supporters in Syria.  He was poisoned before he was able to start.

Aristobulus II had a son, Antigonus (Mattathias) who was the last Hasmonean king and ruled from 40 to 37 BCE.  With the support of the Pathians, he captured Jerusalem in 40 and put Herod's brother, Phasael, to death and mutilated his own uncle Hyrcanus so as to disqualify him for the high priesthood.  Then he was high priest and King of Judea.  The Romans then drove the Parthians from Syria in 39 and Herod attacked Antigonus who was defeated in battle.  He fortified himself in Jerusalem, but was captured after a 5 months siege and put to death. 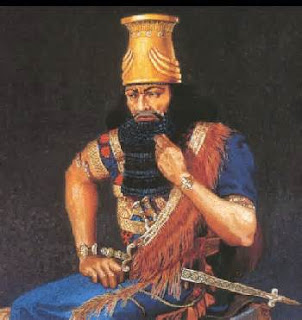 Hyrcanus's granddaughter, Mariamne,  had married Herod but was put to death by him in 29.  So were the surviving Hasmoneans; Aristobulus II in 35, Hyrcanus II in 30, and Mariamne's sons, Alexander and Aristobulus in 7.  Mariamne's brother was Aristobulus III. and was the last Hasmonean high priest.  He was the grandson of Aristobulus II.  Herod was suspicious of him but feared Mark Antony, so he appointed Arisobulus III as the high priest at the age of 17.  The people showed that they accepted and liked him very much when he appeared in his robes on the Feat of Tabernacles and this made Herod jealous.  He had him killed by drowning in a swimming pool in Jericho.