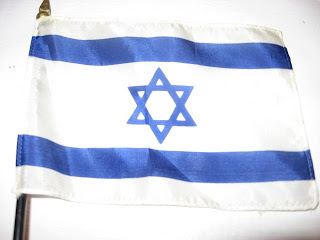 It's a scary thought to be forced into freeing terrorist murderers who have blood on their hands, but Israel decided that when you have a choice between the devil and the deep blue sea, to take the least offensive offer.  The Israeli cabinet has agreed to free 104 terrorists that they have in order to restart talks. This is painful for the whole nation, but Israel truly wants peace.  What are the Palestinians doing?  They are just agreeing to come to the table.  Israel has been waiting for 65 years for a peace pact.

These prisoners are people who have served for at least 20 years already.  Some are Palestinian militants who threw fire bombs.  One case was of throwing firebombs at a school bus full of children.  Other prisoners had stabbed and shot civilians, even women, elderly Jews and other Arabs thought to be collaborators for Israel.  Some of the prisoners are in prison for ambushing and killing border guards, police, security agents and soldiers.  Many were there with a life sentence.

104 prisoners will be freed in 4 stages  over the next 9 months.  The first group will take place soon after the initial peace talks occur in Washington this week.  More will be freed as negotiations continue.  Every Palestinian provocation will result in stopping the prisoner-release process.

Netanyahu has rejected the Palestinian demand that he put a freeze on new construction in Judea, Samaria's towns and cities and in East Jerusalem.  As many as 1,000 new units (apartments or homes) may be approved for construction .  The Palestinians had a 3rd demand that Netanyahu hasn't been able to answer now.  The Palestinians expect Israel to go back to the 1967 armistice lines  which would exclude all of Judea, Samaria and East Jerusalem.  To me, this is an outlandish expectation.

Qaddura Fares is president of the Palestinian Prisoners' Society and stated that freeing prisoners was "the right decision for negotiations."  He also said, "It shows that the state of Israel really does want peace."

Palestinians see these terrorists as "freedom fighters struggling to reclaim their homeland and oust the occupiers."  The whole statement is a fallacy since Israel is not the homeland of the Palestinians.  Their homeland is Syria, Iraq, Jordan, Lebanon, and other Middle East countries.  Only a few people were ever from Palestine, which was not a country but the name given by the Romans to  Israel and Judea which they took by force from the Jews.  The sad truth of the matter is that the Palestinian Arabs have been fed a crock of lies and the world as gone along with it.

Occupiers?  It was Jordan who was the occupier of Judea and Samaria in 1948 to 1967.  What the Palestinians are fighting over is land that was finally given back to Jews through the League of Nations as the Jewish Homeland; all very legal that all the countries of the world signed on in agreement.  Way back then Palestine for the Arabs was planned on, but the Arabs said NO and have been saying that ever since, preferring to fight against the Jews and drive them out.

We all know that Israel has done everything possible to show they are willing to have a peaceful state of Palestine next door, but that what has happened with Gaza has been just the opposite.  Gaza's Hamas and Fatah are always at odds with each other fighting for domination.  The only thing they have agreed to is to destroy Israel.  Need I keep commenting that they have rained down thousands of  rockets, mortars and missiles on southern Israel since 2000?  Israel gave up Gaza for peace that was promised.  Israel has been attacked before it's birth in 47-48-49, then in 56, 67, 73, and has had battles in between such as 82.  Life has been one big battle for Israelis in order to exist.  They have not been swayed to leave but to remain strong and dig in.  They have returned home and home it was, it is and will be.

Posted by Nadene Goldfoot at 10:30 AM