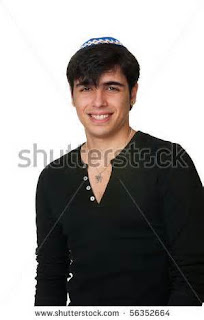 Young Jewish Sephardic Man
A mini-series TV show is produced by a media company in Qatar and currently being aired in Dubai, Egypt, Algeria, Qatar and United Arab Emirates called "Khaybar."  It demonizes Jews.  They are depicted as treacherous and the enemies of Islam who can't be trusted.

The Jewish state of Israel, who has 1.6 million Muslim and Christian Arabs citizens besides 6 million Jews, took this with calm over Shabbat.

The screenwriter and actors are simply demonstrating, they said, that the Jews are the Jews...and still act according to their nature and corrupt any society in which they live.  Now isn't this the way to bring peaceful relations to the Middle East?  How did the rest of the world react to such an act of anti-Semitism?

A fellow blogger, Elder of Ziyon, held a campaign to draw attention to this series which is an act of racist incitement.  Major human rights organizations just ignored it which is characteristic in the face of anti-Jewish animus commonplace throughout Arab and Muslim countries.

The Guardian, who published more than 100 reports and commentaries when the 2005 Muhammad cartoons came out, and when a trailer for an anti-Islamic film on YouTube came out called "Innocence of Muslims" called for printing a large volume of stories on the row it caused, has printed nothing.  Neither has  "Comment is Free"  mentioned  anything about Khaybar and the hatred it can cause against Jews.

Algemeiner points out that the Israel lobby is not bothering to do what they have been accused of, and that is to intimidate elected representatives or have undue influence over the media or even stifle debate over issues of concern to the Jewish community.  Whereas the Muslim minority  do resort to violence in response to anything anti-Muslim, such as cartoons, films or commentaries that are considered offensive.  They act in an anti-democratic way by bullying and intimidating journalists and opinion leaders.  This is just not found in the pro-Israel community which believes in freedom of speech.

In other words, you can make movies and call us names, but the proof of the pudding is the truth of it all, the taste.  I have noticed for the past several years that what Muslims call Jews is in truth what they are themselves.  Their anti-Semitism is nothing more than their mirror image.  They've been demonizing Jews since the year 620 in small ways and in large ones.  It's nothing new.  It's noted.  What the Muslim TV station is doing to Jews is something they don't want to be done to them, do they?  Obviously they don't live by the Golden Rule.