The Palestinians are talking to Netanyahu and Kerry only on the basis of talking about the pre-1967 borders of Israel.  In other words, they want to get what Israel has after being attacked by all the Muslim countries in 1967's June 5th to June 11th Six Day War.  They lost that terrible attack and now they want to erase that fact because it cost them.  Secretary of State John Kerry had to give Mahmoud Abbas a letter saying that the meeting is centered on this.

They had lost face again and they lost the rights to Judea and Samaria which rightfully was not theirs to be had in the first place.  Jordan had illegally just taken it over and occupied it in 1948 when Israel was battling for its very life.  It had been awarded to Israel as part of the Jewish Homeland by the League of Nations which every country in the world had signed onto.  As it turned out, Israel had to be satisfied with 20% of the promised Holy land while the Arabs, who have more land than they can handle, got 80% of it.  Why?  Oil.  The land they sit on has oil that the rest of the world needs.  Therefore promises have been broken in the name of economics and greed. The 67 war allowed Gaza, Judea and Samaria and East Jerusalem to come into Israel's hands as they did not start this war.  That must have been quite a picture:  4 large Arab nations with help from other Arab states against the only Jewish state of infinitesimal size who has the audacity to win!

So far, the Arabs have lost every battle they've started with Israel, and so they also blame the USA for that because Israel has bought weapons from the USA.  However, there never has been an American soldier fighting in America's name; only Jews, and mostly have been Israelis.  Jews entered Canaan under G-d's directions.  We feel we have still had G-d help. After all, the odds were all on the Arab's side to win in 1967, and they didn't. 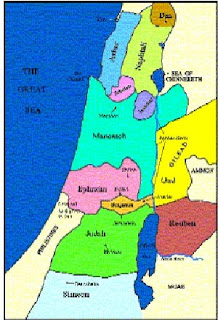 Where the 12 Tribes of Jacob Lived in Israel on 17,500 square miles; 45% being in Trans-Jordan.
Israelites lived here under King David and son King Solomon (I Kings 5:4)Moses had led the Israelites out of Egypt.  Moses (1391 BCE-1271 BCE)  Jerusalem fell to the Romans in 70 CE.  Jews have been suffering from anti-Semitic actions ever since.  Israel was re-established May 14, 1948.

What they should rehash is the escalation which resulted in the Six Day War which consisted of 5 stages so that they won't happen again.

President Nasser of Egypt threatened on March 8, 1965, "We shall not enter Palestine with its soil covered in sand.  We shall enter it with its soil saturated in blood."  This war was highly pre-meditated and was to be a bloodshed for the Jews of Israel.

2.  The false reports were used by Egypt as a pretext for concentrating the bulk of its army in Sinai- 90,000 men and 900 tanks.

3. Egypt demanded that the UN Emergency Force withdraw on May 16th and they did which concluded the barrier they had been between Egypt and Israel.  Therefore Israel can never depend on outside help.They had been there since the 1956 Arab attack.

4. Egypt closed the Straits of Tiran  on May 22, 1967 to all navigation destined to Israel and called for war.THEY DECLARED WAR AGAINST ISRAEL.

5.  The Arab States formed a war pact against Israel.  The armies of:
EGYPT, -led the pack
JORDAN
IRAQ
SYRIA  began to concentrate their forces along the frontiers with Israel.  The Jordanian army was under the command of an Egyptian officer.

Arab leaders made speeches during this period affirming publicly their intention to destroy Israel.
President Nasser said on May 26, 1967:
"The Arab people want to fight.  We have been waiting for the right day when we would be fully prepared.  Recently , we have felt strong enough to triumph with God's help if we enter into battle with Israel.  On that basis, we have decided to take the actual measures.  Taking this step makes it imperative that we be ready to embark on a TOTAL WAR with Israel.

President Aref of Iraq spoke on June 1, 1967 on Radio Baghdad and said,
"We are resolved, determined and united to achieve our clear aim of wiping Israel off the map.  This is the day to wash away the stain.  God willing, we shall meet in Tel Aviv and Haifa.

Leader of PLO-Ahmed Shukairi on June 4, 1967 on native born Israelis:
"Those who survive will remain in "Palestine," but I estimate that not many of them will survive."

Israel waited for 3 weeks from May 15th for international intervention to stop the escalation and remove the threat from its frontiers.  The Great Powers and the United Nations were incapable of effecting any change in the situation.  On June 5th, war broke out.

In 6 days, Israel destroyed the armies that had massed along its frontiers and menaced its vital centers.  Cease-fire lines were established along the Suez Canal, the Jordan River and the Golan Heights.  The Straits of Tiran were once again open to navigation.  Jerusalem was re-unified.  Israel had conquered more than triple the size of the area it controlled from 8,000 to 26,000 square miles.  Israel won the Sinai, Golan Heights, Gaza Strip and Judea and Samaria and unified Jerusalem.  Israel lost 777 soldiers and 2,586 were wounded.  It compares to the USA's 8 years of fighting in the war in Vietnam as far as population goes.  Cease fire was invoked on June 10th as Israeli forces broke through enemy lines and were in a position to march on Cairo, Damascus and Amman, Jordan.  The Arabs called "UNCLE!"

I would give them Bupkas!  Netanyahu is giving them back some of the killer Palestinians that have been in Israeli prisons. The Arabs want 350 of which 100 had been the deadliest of killers.   They are to be released in phases.  Their charges range from rock throwers, deadly assaults, shooting attacks to bombers.

Tzipi Livni, Israel's female negotiator, said she is hopeful after years of mistrust.