Israel's Objectives Since 1967 Run Smack Against the Arab Objectives 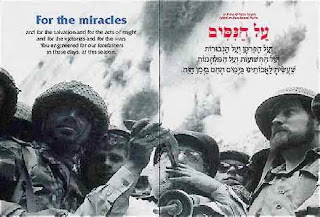 When the Six Day War concluded, Israel's Defense Minister, Moshe Dayan, was "waiting for a telephone call from the Arab leaders."  We're still waiting these past 46 years.  "Three weeks after the conclusion of hostilities, the first major incident occurred along the Suez Canal."  "Israel, Egypt, Syria and Jordan were the major combatants in the Six-Day War. In addition to these, other Arab countries played smaller roles in the conflict." That meant about 5 million population of Israel was up against 79 million in Egypt, 22 million of Syria and 5 million of Jordan.

Since the Six Day War of June 1967, Israel's main objective has been:

1.  To have peace within secure borders.  Israel has known only armistice lines and cease fire line.  It has been seeking borders which will be defensible.  This means borders that will not be a temptation to an aggressor as did the pre-1967 lines.

Israel has offered to negotiate since 1967 with the Arab Governments a true peace which would also provide for secure borders.  Israel has insisted that it makes no prior conditions, and that everything will be open for discussion in the negotiations.  Of course Israel has a few positions on where the secure borders ought to be.
2. "Israel vowed not to return to the vulnerable armistice lines of 1948 and '49 or to a divided Jerusalem, and yet to be "unbelievably generous in working out peace terms," as Foreign Minister Abba Eban put it. In direct talks with Arab countries, "everything is negotiable," he said."

3. Israel was prepared to return most of the Sinai back to Egypt with positions that it must remain in control of Sharm el-Sheikh so as to prevent Egypt from closing the Gulf of Eilat for a 3rd time.  Sharm el-Sheikh must be linked territorially to Israel.  The remainder of Sinai must be demilitarized.

4. Israel didn't wish to annex a large Arab population but its position was that the River Jordan should no longer be open to crossing by Arab troops and in order to assure this there must be an Israeli foothold in the Jordan Valley.

The Arab objectives of 13 Arab states led by Nasser since 1967 have been the three Noes of Khartoum in August 1967 where the Summit Conference of Arab leaders laid down 4 principals.
1. No peace with Israel
2. No negotiations with Israel.
3. No recognition of Israel
4. Insistence on the rights of the "Palestinian people in their own country."

Nasser held out for 12 years and then signed a peace treaty with Israel.  This made the 20 member Arab League so angry that they expelled Egypt from their group.  "The Arab League was founded in Cairo in 1945 by Egypt, Iraq, Lebanon, Saudi Arabia, Syria,  Transjordan, then Jordan from 1946), and Yemen, (North Yemen, later combined Yemen).  An additional 15 Arab states and 4 observers were later   admitted. They exclude Israel, so really should call it the Muslim League.  Notice the present list of 22 member states includes Palestine with Jerusalem as their capital.

The Palestinian people are not in their own country.  They are not native to Palestine.  Many were in the land only 2 years before the last census was taken.  Most all were recent immigrants.  Very few were old timers with ancestors there before 1860's in which they were land owners.  Before Palestine was named as such, the land was Judah and Israel, taken by the Romans and renamed after the Jewish Bar Kochba rebellion of 135 CE.

This can only be considered for the rights of Arabs since 1948 who call themselves Palestinians in denial of the nearby lands they migrated from. They have become the 1.6 million Arab citizens of Israel.   In the late 19th and early 20th centuries, Arabs were wandering in search of subsistence all over the Middle East.  Palestine had become a wasteland of which the remaining Jews had refused to leave.  Arabs there thought of themselves as Ottomans or Turks, or Southern Syrians, or just the Arab people but never once said they were Palestinians.  One thing though, they were full of religious prejudice and would  turn to anti-Jewish violence often, especially at the call of their Muslim leadership long before Israel's 1948 birth.

The land was designated to be the "Jewish National Home" and Britain held the Mandate which meant they had the responsibility to see that this came about back at the end of WWI in 1917.  Instead, the British treated the land as "Arab Land."  They brutally restricted Jewish immigration while Arab immigration was freely permitted which came to be known as the British "system" of immigration.  To appease Arab "discontent," the British violated the international League of Nations Mandate because they facilitated Arab settlement onto Jewish-settled land, and by treating Jews only on sufferance in their own Jewish National Home.  They didn't take any measure of Arab in-migrants and immigrants because the prevalent erroneous assumption was and still is that those Arab migrants had always been there.  Omitting such information facilitated the myth of today.

This came about with the 1939 White Paper restrictions from Britain when Hitler was carrying on a war against Jews.  This White Paper became a death warrant.  The White Paper remained a policy of Great Britain until Israel's birth on May 14, 1948.  England's War Cabinet had declared, in March 1942, that the British would continue to take all practicable steps to discourage illegal immigration into Palestine.  The Struma was sinking and the Grand Mufti declared a holy war against Britain and was demanding that Hitler, Ribbentrop, and the Bulgarian, Hungarian and Rumanian governments keep their promise of the destruction of the so-called Jewish National Home which was an immutable part of the policy of the greater German Reich.  The Nazi allies must do all that is necessary to prohibit the emigration of Jews to Palestine by sending them to the extermination camps in Poland.  So the British went along with these demands with their stopping Jewish immigration and encouraging Arab immigration instead.

They allowed Arabs to swarm into the Jewish settled areas of Western Palestine and take the places that Palestinian Jews were clearing for Jewish refugees, and then charged the Jews with displacing Arab natives in the Jewish-settled areas of Western Palestine.  The Arab found benefits they had never known before and shouldn't be able to claim to have been victims.  John Hope Simpson (1868-1961 British politician serving in Parliament, retired in 1916)  acknowledged in 1930 that the Arab demand for justice was seen instead to be injustice.  He recommended limiting Jewish immigration which went against the Mandate.on October 21, 1930 because there wasn't any agricultural lands for them to work.  This is when the Passfield White Paper was issued.  It was also the same time the Nazis were warming up to their intentions to rid themselves of Jews.

Arab traditional movement was the same migration equal to the situational migration of the Germans, Russians, Czech, Hungarians, Vietnamese, Cambodians, Afghan and Lebanese refugees fleeing to become immigrants elsewhere, escaping from persecution, dictatorship or certain death, only they moved into Palestine's Jewish areas looking for work.  They were not the settled inhabitants for millennia.  They were simply shifting to where they thought their brethren were better treated.  They found life much better in the UNWRA camp setting than for the landless impoverished laborers anywhere in the Arab world.  With the Jews they had found better wages and improved living conditions but that wasn't as strong a motivator as the Arab leaders direction not to stay in 1948.  They obeyed leadership and fled with the instigating promise of taking the Jewish homes after their armies won, for the Arab armies didn't want to kill anyone but Jews.

Posted by Nadene Goldfoot at 12:01 PM