Remember all the terrorist prisoners that Netanyahu was forced to free from Israeli prisons because Kerry said it was the thing to do to keep Abbas at the peace talk table?  Well, now we have 3 missing teenagers, 2 16 year olds and one 19,  Gilad Michael Ben Bat-Gallim, Eyal ben Iris Teshura, and Yaacov Naftali ben Rachel Devora. Frankel (American-Israeli.)   ( Ben means son of, and bat means daughter of).  One has American citizenship.  The US Ambassador to Israel has been told about it.

Hebron, ancient city of Judah, 18 miles south of Jerusalem.  Abraham bought land, the Cave of Machpelah here to bury his wife, Sarah, in it.  Today a mosque stands on that site.  It was a Levitical city decided by Joshua and a city of refuge for the Jews.  Much Jewish history is here.

They are Yeshiva students.  A yeshiva is a religious school.  They were hitch-hiking home from their yeshiva which is in Gush Etzion, to the north of Hebron, a Palestinian city today.  This is not unusual in Israel.  When I lived in Israel (1980-1985) all soldiers hitch-hiked to get where they had to go.  We gave plenty of rides, but to soldiers in IDF uniforms.   The military is conducting a widespread operation to find them.  They're patrolling Hebron today, since they went missing late  Thursday. The fear is that they have been kidnapped like Gilad Shalit was several years ago by terrorists.  House to house searches in neighboring villages is being done as well as having to put up road blocks.

Netanyahu said that he is holding Abbas's PA responsible for the safety of the 3, but their attitude is, why is it their fault?  They deny having anything to do with the abduction.  I have to laugh because no matter what happens in this world, every Arab state is used to blaming Jews or Israel for it.  Suddenly the PA doesn't like the same treatment.  However, Israel has every reason to think they are responsible when they openly have textbooks in schools that teach hatred and when they have citywide celebrations of people who have killed Jews and build statues of them.  There is no secret that they are doing everything they can, TV programs, talks, teaching their people to hate and kill Jews.  The difference between Fatah and Hamas is that Fatah teaches people to be hateful and Hamas is hateful and physically does things like shell Israel.  Besides this, Abbas demanded that criminals be let out of prison, and then he walked out of the talks when that was accomplished.  No?  He isn't responsible?  Ha!

Tzipi Livni is at a conference in London and Kerry spoke to her about it.  Netanyahu told Kerry that Palestinian militants have said that they want to kidnap Israelis to win concessions from the Israeli government.  Didn't the USA just release 5 very dangerous terrorists for one soldier?  One immediately said he was going back into the fight. 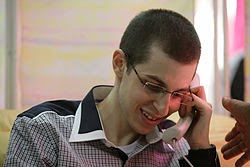 Netanyahu said that 1,027 Palestinian prisoners were freed in October 2011 for their one soldier who was held a captive for more than 5 years, Gilad Shalit. He was kidnapped on June 25, 2006. " Shalit was captured near the Kerem Shalom crossing in Israel, and held by Hamas as a hostage at an unknown location in the Gaza Strip.  During those 5 years plus he was held in isolation.  The prisoners released to save him " were collectively responsible for 569 Israeli deaths."  Gilad called his parents as soon as he was freed.

In 2013, an Israeli soldier was kidnapped and killed by a Palestinian who had lured him to Judea-Samaria.  The kidnapper wanted to use him to get the release of his brother, held in an Israeli jail.  Sgt Tomer Hazan, 20 years old was lured in Tel Aviv by Nidal Omar, 42, into a Taxi to drive to Judea-Samaria.  His body was found in a water cistern.  Omar had no work permit to be in Israel.  My next door neighbor was Harry (Eli) Hazen.  I hope this was not his son.  In Israel, every time you hear of a death, you take it as one of your own family.  We're a small group, and one mother's anguish is everyone's anguish.

Prayer groups for the boys recite chapter 20 of Tehilim on such an occasion, psalm 121.  This is Friday.  At sundown Shabbat starts and lasts until Saturday night when 3 stars come out.  No doubt the police and soldiers will have to continue their search for the 3. Women are urged to light a special candle for them in their prayers.

Who else had kidnapped people in Israel?  Palestinians.Update:  This time it is reported to be ISIS operating in Hebron.

Update from Embassy of Israel: Since 2013, over 64 kidnapping attempts were foiled by the IDF & ISA, most of them directed by Hamas prisoners in Israeli jails.
Update: On Friday, 6/13/14 Reuter’s Jerusalem bureau fielded a call from ’Dawlat al-Islam,’ an ISIS branch operating in Hebron. The caller claimed responsibility for the kidnappings and said the incident was in retaliation for the killing of three of its members, Fox News contributor Lisa Daftari reported on her blog.
Update:  a mobile phone of one the missing boys has been recovered. Also, the car apparently used for the kidnapping was found. In the car authorities recovered personal belongings of the teens. One of the 16 yr olds is an American.  Sick fact is that the Palestinians are celebrating the kidnapping, passing out cakes because of it.  Sick society to do such a thing.  They did the same thing when the Twin Towers fell in New York.
Resource:  http://www.jewishjournal.com/israel/article/yeshiva_students_missing_suspected_kidnapped_by_terrorists_video
http://en.wikipedia.org/wiki/Gilad_Shalit
http://www.nytimes.com/2013/09/22/world/middleeast/israeli-soldier-is-kidnapped-and-killed.html?_r=0
http://www.jewishpress.com/news/breaking-news/breaking-idf-suspects-3-boys-have-been-kidnapped/2014/06/13/
http://www.israelnationalnews.com/News/News.aspx/181681
http://jewishbubba.blogspot.com/2014/06/shameful-hamas-no-honor-here.html

Posted by Nadene Goldfoot at 4:22 PM