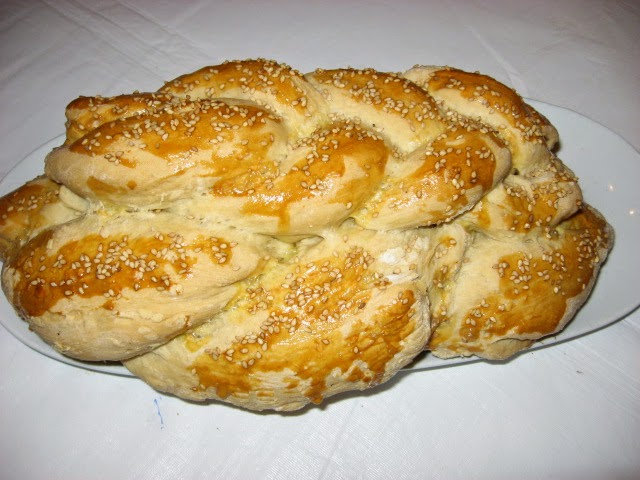 Challah, a special bread made for Friday night, the start of Shabbat, a Jewish custom.  Bread in the bible days was considered the main element of any meal and a blessing is said over it.

There are those that do not believe much in what is in the 5 books of Moses found in the Old Testament in which tells us that there was an Abraham who fathered an Ishmael by Hagar, an Egyptian woman who was his wife's handmaiden, and Isaac by his wife, Sarah.

Yet, DNA is proving that the story is correct in that we are finding the Cohen gene, which is haplogroup J1c3d,  is being found in the Jewish Cohens, men who are first to read from the Torah in the synagogue because they are Cohens who count their main ancestor as Moses's brother, Aaron who came from Abraham through Isaac, and in the Arab communities as well from Abraham through Ishmael.  Scientists can tell if the haplogroup is from the Jewish or the Arab branches.  What thrills me is that this was written by Moses who lived from 1391 BCE to 1271 BCE.  He knew that there was a connection between the Israelites, later to be called the Jews and the rest of the the Middle Easterners, and that is is just something  now proven scientifically 3,300 years later.  Actually, Jews have always spoken of the Arabs as our cousins because of Moses's writings. 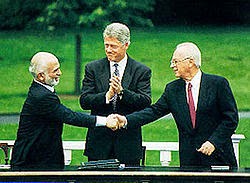 A handshake between Hussein I of Jordan and Yitzhak Rabin, accompanied by Bill Clinton, during the Israel-Jordan peace negotiations, July 25th, 1994

The latest revelation, which Dr. Jon Entine, author of the book, Abraham's Children," lectures in a video made in 2011, tells about finding out more about the Palestinians' DNA and that there are also those who are Bedouins in Judah and Samaria also have the Cohen gene. Some of these people are interviewed on the video and profess to be interested in going back to Judaism now.  Others must be found in and around Judah and Samaria who had lived there for a long time.

We know that Assyria had struck Israel and took away the cream of the Israelite people in 721 BCE, the best of the population.  The Babylonians did the very same thing in 597 BCE and again in 586 BCE.  When the Romans came along and conquered Jerusalem in 70 CE they also had taken the best of the population as slaves, just like they had taken the Greeks before.  So that means that the laborers, the general population were left in pockets, hiding out where they couldn't be found.  Some of these people were forced to convert to Islam, so thus we have these Palestinians who had been Jewish tribes.

The video opens  with Mike Nichols, a Jewish movie director with Russian and German ancestors finding out he has the Cohen gene and that he matches with Dr. Mehmet Oz, a Muslim American surgeon with Turkish ancestors.  Dr. Oz, when interviewed told how he was surprised at this finding and that it shows how we are so similar with the difference only in how we think about things.  That may be the crux in our differences.  Here's where environment may come into play to show its affect on people even more than genetics.  Yet genetics is showing how similar we are, as well.

Some of these clans or even tribes have preserved Jewish customs of lighting candles,   only are doing it on both Thursday and Friday nights.  They have Challah.  The boy babies are circumcised.  They found tefillin.  Prayers were done in secret, showing a behavior similar to the Anusim (originally called Marranos) who were from Spain and Portugal and through the Spanish Inquisition of 1492 had to hide their Jewishness for fear of death.

It showed they have a practice I hadn't heard of and that is of lighting candles at the graveside   One village had the name which translates into wine makers.  This is definitely not coming from after 632 CE since Muslims have a taboo against drinking wine or any other spirits, so they must have been a village of wine makers.

Jewish artifacts were found such as the Star of David on homes, and others that had been disguised by embellishment on the original star.  90% of one town was originally found to have been Jewish at one time. The researcher did run into people who did not want cameras on their homes showing some of these artifacts.

One fellow could recite his ancestors back 8 generations, which was done as shown in the book "Roots" when Alex Haley went to Africa to find his roots and ran across his tribe who could recite a very long and involved history of their genealogy.  Another thought it was his grandfather who converted to Islam.

Who cares if  there are some Palestinians who have   Jewish roots?  What difference does it make?  Who cares at all about the DNA of people?  Like Dr. Oz mentioned, the difference may only lie in the way we have learned to think.  So far, Muslims have been taught, for political reasons, that we Jews stem from monkeys and apes.  Really?  Now that they might learn we truly are cousins, is it wise to say this, or would it be better for all if we recognize that we are brothers under the skin and learn to get along and work together.
That's what I'm hoping.  So far this has been a one man crusade of someone putting all his money into this endeavor of research.  He's an Israeli and I'm saying, more power to him.  This is a wonderful find.

We know that much of this is also true of many of the Pashtuns, who number into the millions. Some believe that they are descended from the Lost Ten Tribes.  Many present people could be extensions from the Persian Jewish community.  Most Afghan Jews speak Judeo-Persian.   Some, or even a few of them may have Jewish DNA since they still have continued some Jewish customs as well, but they lately profess a fighting spirit against the Israelis today and are deep into their Islamic beliefs.  My own Jewish father's DNA haplogroup matches with a few Pashtuns, which tells me we are connected somewhere along our line of existence, possibly from our stay in Persia.    Some of the Pashtuns have become Talibanists, terrorists, and of course this is an environmental thing.

The video has many aspects to it all involving Jewish DNA findings.  It's well worth studying.  I must add that this was produced in 2011 and that there have been many advances in autosomal DNA testing since then.  I'd love to have an update on that one aspect as we are finding some fantastic things through this type of test as well.  Doing genealogy required having written records of our ancestors.  When that isn't available, we can turn to autosomal testing and find people who share segments of our 23 chromosomes.  Because of this, I've found connections to the Rabbi of Worms through  a triangulation method who in turn has written records of his ancestry to Rashi, who has the known oral history of being connected to King David.

DNA science is making leaps and bounds while connecting to other  subjects of history, archaeology, anthropology, sociology, Linguistics and population genealogy, of course.

As Dr. Ariella Oppenheim, geneticist in Israel,  said, "this shows a genetic connection only."   We know we are missing the key to all our problems, which is how we have grown to think differently about each other.  Israel has set up programs which connect Jews and Arabs into mutual community events and had always hoped that eventually the two groups would learn to tolerate each other.  While Israel has been doing this, schools in the PA held areas of Judea and Samaria (West Bank) have been busy with their textbooks teaching a hatred for the Jews.  Politics have been destroying any advent of a mutual co-existence.  That must change, but how?

I spent a sleepless night thinking of what can happen.  I think spreading the knowledge that there is this blood connection would be a good starting point that might lead to joining mentally as well eventually.  The Palestinians have been saying that the Jews have no connections to Israel.  They are in complete denial of our history and roots.  Maybe showing this video or something similar which will teach people more about this history would be helpful for starters.

Of course we're going to run into competition with Islam.  Muslims will be against other Muslims converting back to Judaism.  Their political upbringing is not as open-minded as the Jews have been.  As I look at the history of the Muslim  countries, they have had nothing but fighting going on between them and are very competitive with each other, so there they are, most likely all cousins, and yet they don't always get along, so maybe I have too high a hopes.  The same with Europe.  They're probably all interrelated, too, but have warred against each other throughout the generations into 1944.  After all, Cain killed Abel, and they were brothers.  Well, we've advanced in so many ways.  Now we need to advance past the Cain and Abel stage of thinking.  For those who don't know who they were, they were Adam and Eve's sons.