Why Distrust and Contention Between Palestinians and Israel 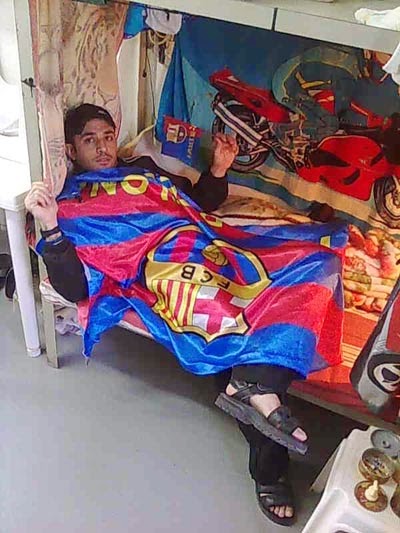 Having served 6 years already for stabbing  killing an Israeli chocolate manufacturer, Sasson Nuiel.  Saeed is leading a good life in an Israeli prison.

Hamas refuses to change their charter which is the same as Muslim Brotherhood-to destroy Israel and kill Jews.  Both Fatah and Hamas refuse to recognize Israel as a Jewish state.  They've refused offers of their own statehood for the past 66 years and just now declared it without any peace accord with Israel.  It's taken them only one week to commit acts of destroying Israel with continued rocket attacks from Gaza and now a kidnapping of 3 Jewish teenagers.

Israel's prisons hold about 5,000 Palestinian terrorists.  Hundreds are serving life sentences for murder.  The Palestine authority run by Abbas sees them as heroes for fighting against Israel.  The murderers get extra attention and honor.

The PA sees kidnapping as a legitimate act that will bring about the release of these terrorists.  What Israel's neighbors would do to people who would terrorize them would be to kill them.  Instead, Israel puts such people in prison.

In fact, the PA encourage Hamas to kidnap Israeli soldiers and hold them hostage for the reason of using them to exchange prisoners for release.  This was stated by the Deputy-Secretary of Fatah's Central Committee, Jibril Rajoub, a senior PA official on January 2, 2014.

Abbas said  on October 6, 2009 on their official TV program that "We have 11,000 prisoners.  We will definitely, always and forever, act to free them using all means."  Notice that they never tell them not to attack Israel to keep them out of prisons, but they instigate and encourage them, then promise to get them out.

Fatah emblam
This year on January 2, 2014, Rajoub said that "if Hamas wants to kidnap soldiers...we encourage them.  When they kidnapped Shalit we congratulated them.

Just this April 16, 2014 on their Al-Hayat Al-Jadida, Ismail Haniyeh of Hamas promised that "The kidnapping of Israeli soldiers.....will continue.

Since they became a recognized Palestine a week ago, Hamas has been busy talking up recruits from Fatah to join them in attacking Israel.  They now are connected and can reach Judea-Samaria because of this recognition.

A week ago the USA recognized Palestine, followed by the EU which goes against Israel's expectations of a peace accord first.  This terror state could only wait one week before they are actively committing this act, even though they had promised Kerry and Obama to distance itself from terror.  This is an act of terror.  To rub salt in Israel's wound, they continue to glorify terrorism and promote kidnapping Israelis as hostages.

Their comments have been, when hearing of a kidnapping, "That's a good thing.  We don't deny it.  On the contrary, it's good because in that small strip of 40 X 7 km (Gaza) , they managed to guard Gilad Shalit and hid him- that's a good thing.  This was heard on October 24, 2011's TV program.

Two years earlier Israel had released 20 female terrorists in exchange for information about Gilad.  The Palestinians took this as hope to use this method to free 11,000 more and this is but one of many means they are ready to use.

Why are there so many Palestinian prisoners in Israel's prisons?  "It is a fact that over 1,000 Israeli civilians have died as a result of suicide bombings and other terrorist attacks since the beginning of the conflict (most of them during the Second Intifada between 2000-2005*), but violence and terrorism is far from the whole story.  Since 2001 southern Israel has been peppered by rockets, missiles and mortars from Hamas' terrorists.  This is true terrorism.

First Israel suffered from suicide bombers in the 90's.  Palestinian militants first employed suicide bombing as a terrorist tactic then.  Some are in prison for throwing rocks at Israelis.  In September 2000, the 2nd Intifada started and went on till February 8, 2005.  The bombing is southern Israel has never stopped but continues today.

The Arabs are anti-Semitic and keep on attacking Jews.  "

Columnist Richard Cohen wrote that "The Arab world is the last bastion of unbridled, unashamed, unhidden and unbelievable anti-Semitism.  Hitlerian myths get published in the popular press as incontrovertible truths.  The Holocaust either gets minimized or denied, as Iran does.  ....How the Arab world will ever come to terms with Israel when Israelis are portrayed as the devil incarnate is hard to figure out.

I have news for Richard Cohen.  anti-Semitism has mushroomed again all over the world.  He's right in blaming the Arabs, for they have fed the propaganda and lead the charge, though.  Of course, not every Arab feels this way.  We do have supporters from them as well, but when those against us have given false testimony against us such as anti-Semites of yesterday, again they are being listened to as seriously as those reading their bibles believe in that. 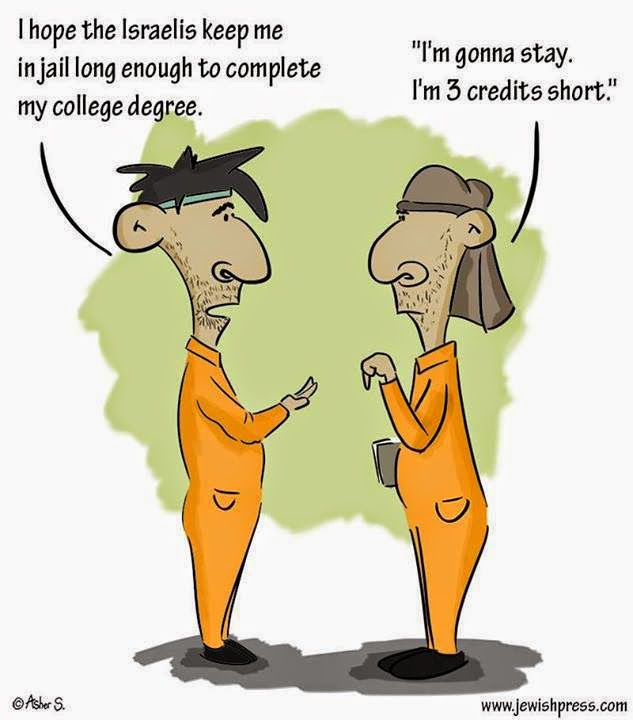 What is it like in an Israeli prison?  Israel's prisons are closely watched by the whole world.  One reason is that the government has allowed representatives of the Red Cross and other groups to come regularly to inspect them.  Does Iran allow this?  A relative of mine was imprisoned there on her vacation for buying some little chatchka from a pesky salesman.  She was in there for years, and had to cook her own food.  Prison is not a hotel, and shouldn't be a pleasant place for anyone, but these prisoners are being paid by Hamas for their acts, which causes more to become terrorists.

Israel is not allowed to arbitrarily arrest its citizens.  Defendants are innocent until proven guilty, just like the USA.  They have the right to writs of habeas corpus and other safeguards.  Israel doesn't jail political prisoners like Russia has.  Israel keeps an independent judiciary.

Israel was born in May 1948.  Years ago, some Arab prisoners who were suspected of participating in acts of terrorism were interrogated that one could call severe methods.  They were criticized as using excessive methods and their Supreme Court issued a landmark ruling in 1999 that prohibited the use of many of the practices that they considered abusive.  The USA went through the same steps.  We've all heard about how USA police used to use the rubber hose.

Israel never has had the death penalty.  Only once, when Adolf Eichmann was condemned, has it been used.  He was the man  most responsible besides Hitler for the "Final Solution" to kill all Jews in the world.  No matter what the Arabs have done, and some cases are too ghastly for me to even write about, have they decided on the death penalty.

Prisoners get to mingle with each other, throw parties and study for advanced degrees.  they can stay in touch with their fans on Facebook using their 3G mobile smartphones.  Life is more like a vacation.  They just don't get to have bagels and lox, that's about all.  They even get a salary from the PA, even Hamas terrorists.  The money comes from American and EU taxpayers.  10% of the PA budget pays salaries of prisoners and benefits to their families and families of terrorists who weren't lucky enough to end up in prison but who tried to shoot it out.  So they eat very well.  The Jews they murdered have families who don't eat as well.  This is how  $100 million dollars is spent on benefits for terrorists.  How could any government fall for their words that they oppose terrorism when they are subsidizing the terrorists which the instigator and they go on aiding and abetting terrorists ?

Knowing all this, Kerry and Obama's government tried to force the issue and demanded that Israel bend to their wishes to accept a Palestinian government.  Oh sure, Israel must be the only little state in the world who would just love to have the killers of their families be allowed to profess their statesmanship, a position that gives them extra rights in the world---to accomplish their goal of doing in Israel.  No way does it spell out a psychological change of their hearts.  If anything, this has given them fuel to steam ahead with their goal---with the slipshod promise to Israel that they will keep their eye on the Palestinians.  It's only gone from bad bad bad to worse and worst.

Now Israel has to watch the west which is Gaza and the east which is  Judea-Samaria, both only a few blocks away from their own homes. All the while Israelis have to watch what's happening in the north where thousands of missiles lie pointing at them from Syria and Lebanon.  Somebody must think that I'm ready to buy the Brooklyn Bridge.   We know the whole world watches once in a while, but nobody cares anything about Israel's enemies who are out to destroy them.  That's because they are under a subtle attack themselves and are morphing into the same thing.

Human rights groups are just as much at fault of the situation.  They condemn Israel every moment with unfounded accusations which has caused Israel to bend over backwards to show how well it treats Muslim terrorists.  IDF is under the same rules of engagement as the USA which are causing serious US casualties in Afghanistan.  Those in charge of Israeli prisons are allowing the terrorists to post propaganda on Facebook from the prisons!  In their defense, it could come from not being able to read Arabic, for I'm sure it's not in English.

Human rights groups even are as one-sided that they describe Gaza as a prison.  They have free electricity and free water supplied by Israel because they have not paid their bills.  While Israel is carefully measuring out their water use, Gaza has opened up a water park.   Tell CNN and BBC that they are full of prunes in their reports about how awful Israel is.  Their prejudice is showing.  The newspapers are just as bad so they get money from them.

1700 Iraqis have just been murdered by ISIS who are about 30 miles from Damascus now.  Yes, the world is in good shape and it's all Israel's doing according to many.  No wonder Israel finds it difficult to trust a terrorist state that has just been accepted by the US and EU.  Thanks buds.


Posted by Nadene Goldfoot at 4:37 PM

I like your blog nadine. It is an incredible time to be alive on the earth watching Bible prophecy unfold almost every single day in the news isn't it? I wrote something on your comments section on your other blog about haplogroups dated june 18th 2014. I hope you have a moment to reply. Thanks.