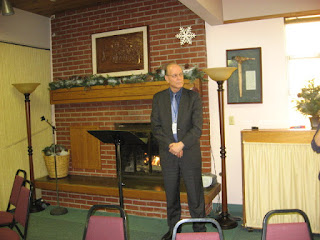 CUFI (Christians United For Israel) honored and remembered Israel again yesterday afternoon at a kosher luncheon and last night in a wonderful program at two different locations.  The keynote speaker at both functions was retired Ambassador Yoram Ettinger,  "an expert on US/Israel relations,"who "served as Minister for Congressional Affairs at Israel's Embassy in Washington (with the rank of ambassador),  as Israel's Consul General in Houston and as Director of Israel's Government Press Office." The audience last night  at the New Hope Community Church was also made up of more Jews than I had seen in earlier years.  It's wonderful to see that we have this group of friends who give their heart and support to Israel, our fledgling country of 64 years who is fighting for its very existence.

Yoram's speech centered on the connection between the United States and Israel.  I learned facts that I didn't realize.  Our support certainly should be unfaltering, given our history together, unlike some places such as Germany and England where the Jewish people found themselves either in peril for their lives or exiled for hundreds of years due to anti-Semitism.

"Yoram Ettinger is executive director of Second Thought: A US-Israel Initiative. An expert on the politics of the Middle East and overseas investment in Israel’s high tech industries, Ambassador Ettinger is a trusted consultant to members of Israel’s Cabinet and Knesset and regularly briefs U.S. legislators and their staff on Israel’s contribution to vital U.S. interests. He has served as Minister for Congressional Affairs at the Israeli embassy in Washington, Israeli Consul General in Houston, Texas, and Director of the Israeli government press office."

CUFI's inception was in February 2006 and since then have held over 150 Nights to Honor Israel across the country where the attendance has numbered in the hundreds of thousands.  They come to honor and bless Israel.  The last night in the Portland/Vancouver area was June 2009.  Last night was the 4th event. CUFI states that they believe that the Jewish people have a right to live in their ancient land of Israel, and that the modern State of Israel is the fullfillment of this historic right.  They are the largest pro-Israel organization in the United States with over one million members.

One of CUFI"s accomplishments that I thought was impossible is making an inroad in certain universities that have become so anti-Israel.  So many have been overtaken by groups who are like the Muslim Brotherhood, spouting such hatred and false facts that never get checked.  Brave CUFI students are standing against this front and bringing in a message of their own that is being listened to.

A survey shows that there are a lot of mature adults who back Israel's rights in the United States, but we are all worried about our future generation after such brainwashing that is going on in our schools.  CUFI, at least, will have a generation who will care about Israel.

Yoram, who graduated from UCLA,  is not finished in our Portland area.  He is speaking again tonight which will include a question and answer period, which we also had in our luncheon with him.

For Jews, we had just finished our holiday of Purim, which fell on February 24th, our reminder of the close call of extinction by the wicked Haman in Persia, who wanted all Jews everywhere killed.  It was Queen Esther who saved the day.  Again, we're facing the same problem from the same people.  We don't have Queen Esther, but today we have friends in CUFI who also are working hard to save Israel.  Such a mixture of people from various churches throughout America are making their voices heard.  Many are not strangers to Israel, either, and have been there if not once, many times already, seeing the progress.

I believe it is the South that is thought of as the Bible Belt, but CUFI members come from all over the United States and are people who study the Bible which includes their Old Testament as well.   Our government is learning that there are a lot of Americans who care about the necessary and fantastic relationship we have between Israel and the USA and how helping Israel to exist is also benefiting the USA in so many ways.

CUFI, you brought tears to my eyes again last night in that wonderful feeling that we have friends standing with us in our struggle in a very unfair world.  I am so proud of you.

Posted by Nadene Goldfoot at 10:20 AM