Nadene Goldfoot
What's happening to fight terrorism is causing questions about our government and how they believe in protecting our country.  My eyebrows are arching when I read that "it isn't unusual for our military and intelligence officials to visit Saudi Arabia and then leave it repeating the classic Saudi talking points about Islam." Our important officials and other American citizens are also spending more time in Qatar.  The same thing can be happening there as well.  Both places are small but wealthy Sunni countries with more than average influence on our government.  For instance, Qaradawi, a most important  religious Sunni leader,  lives in Qatar and has a death wish for all Jews and Israel.

1. Islam is a stable influence on the region.
2. Israel is a destabilizing influence.

My thought on this is that Israel is showing the other Muslims a democratic society and that the 1.4 million Arabs living in Israel are most likely better off than the ones in their country being it's the only democratic country in the region.  They even serve in the Knesset and have their own political parties.   But are our USA  government workers becoming brainwashed?  Are they swallowing this tripe of negativism towards Israel? 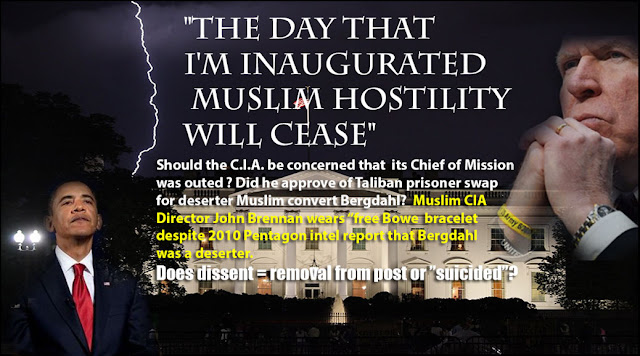 Take John Brennan, for instance.  He has developed links with the Muslim Brotherhood who I think is the cause of Egypt's downfall in the Arab Spring.  They had been outlawed by Sadat,  and now look at the trouble they've caused the whole neighborhood. They also have the charter with the top goals of destroying Israel.  I don't take this lightly.  Brennan has brought known leaders of Hamas and the Muslim Brotherhood into the government in advisory positions.  Hamas's charter is the same as the Brotherhood in that they also have as goal #1 to destroy Israel. Hamas and Fatah are at each other's throats constantly in fighting over power and leadership.  Hamas has been a terrible influence over Fatah in causing them to be terrorists.   These Muslims are advising our government on counter-terrorism strategy  in the War on Terror program.  Is that all?  To John, this War on Terror means only Al Qaeda.

There is even reliable evidence that Brennan has converted to Islam. Snopes says NO.    Would a man do that just to have an in with Muslims to gain information?  Is this expected in the CIA?  Or, if true, is it from the heart?  Does he now believe the hard line of wanting to get rid of Israel?  It used to be that Islam thought of Judaism in better terms than Christianity did but the tables have turned.  Muslim Reactionaries  are only concerned with fighting Israel.  They don't need a pat on the back for doing so which their religious leaders dole out. .  They need to see condemnation for doing so in order to become civil-minded. I  don't care what religion Brennan is, except I want to know where he stands concerning Israel, as what he would be in charge of concerns Israel's very life.  If he's been leading such a double life it's going to be hard to trust what he says, anyway.

Osama bin Laden's Al Qaeda started up from reacting to the Soviet War in Afghanistan in August of 1988.  The group is Sunni Muslim and believe in global jihad and the strict Sharia Law.  They deal in suicide attacks and bombings.  This is the group responsible for our 9/11 attack on the Twin Towers, killing 3,000.  They also had done the 1998 US Embassy bombings and the 2002 Bali bombings.  They are listed as terrorists by everybody.   There have been allegations that the CIA had helped al Qaeda in their fight against the Russians.  Now these terrorists are  fighting us.

"Also, al-Qaeda is possibly using aircraft to transport drugs and weapons from South America to various unstable countries in West Africa. A Boeing 727 can carry up to 10 tons of cargo. The drugs eventually are smuggled to Europe for distribution and sale, and the weapons are used in conflicts in Africa and possibly elsewhere. Gunmen with links to al-Qaeda have been increasingly kidnapping some Europeans for ransom. The profits from the drug and weapon sales, and kidnappings can, in turn, fund more militant activities."