What Syrian Government Has Been Manufacturing and the Burden on Israelis 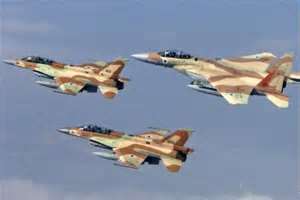 Israeli Jets Over Lebanon
In  March 1988, Saddam Hussein gassed 5,000 Kurdish men, women and children  in his own country of Iraq.

The entire world has been watching Syria and takes developments in the past 22 months there most seriously.  Iran can be leading Syria  in such negative directions, being they have already killed 60,000 of their own people.   Besides attacking most of their own population, they have been working on  harming Israel and the West.  "Syrian forces began combining chemicals that would be used to make deadly sarin gas for use in weapons to attack rebel and civilian populations, a U.S. official told CNN in December 2012."  Besides that, it's possible that Assad may be losing his grip on the country and its arsenal of all sorts of weapons including the non-conventional ones.  What Israel may have bombed was a "scientific research center"  which was making weapons.  The trucks outside making up the convoy were full of the Russian missiles that were hit.

Syria owns advanced anti-aircraft defense systems including the Russian-made SA-17 and possibly the Russian's S-300, which are long-range anti-aircraft missiles.  If Hezbollah got their hands onto such weapons, it would be devastating.  Then Israel would have difficulty flying over Lebanon to stop Hezbollah from wiping out Israel.

The target that Israel's jets hit in around the border of Syria and Lebanon was their anti-aircraft systems, or a convoy of components for such systems such as the SA-17 anti-aircraft missile defenses.  The target also could have been called electronic radar equipment used for the GPS system of drones.  The US unmanned aerial surveillance vehicle that went down over Iran in 2011 contained such a piece of equipment.  What I saw on TV were huge missiles.

The site was by a building which manufactured chemical and biological weapons.  The installations were 7 miles away from Assad's palace which is guarded by Iranian Revolutionary Guards.  Trucks in the convoy were also destroyed, of course.  The installation was reported to be badly damaged.  The raid stopped immensely horrible consequences for Israel but has raised the hornet's ire, mainly from Iran.  Their Deputy, Foreign Minister Hossein Amir Abdollahian,  is calling for significant implications for Israel.  Well, what's new?  Already Syria is adding fuel to the fire with threatening surprise retaliations, so Israel is patrolling the skies.  The White House offered advice to Syria saying they should not further destabilize the region by sending weapons to Hizbullah.  Doesn't Syria have enough problems?

Israel is facing Syria and Lebanon in the north who actively conspire with Iran to destroy her.  On the west and south Israel has Egypt with a new government in shatters that is in complete chaos with wild demonstrations.  Jordan on the east is under threat.  The only good thing is the snow that has come to Israel which people are enjoying.

It is at this point that the UN demands to come into Israel and inspect with their Human Rights Committee.  Israel is denying them entrance.  Enough is enough.  From Geneva through Reuters comes the news that the U.N. human rights investigators called on Israel on Thursday to halt settlement expansion and withdraw all half a million Jewish settlers from the occupied West Bank, saying that "its practices could be subject to prosecution as possible war crimes.A three-member U.N. panel said private companies should stop working in the settlements if their work adversely affected the human rights of Palestinians, and urged member states to ensure companies respected human rights."  The UN is not the law in the world.  Their actions are always centering on Israel even while Syria's government has killed 60,000 of its own people.  They get a pass.  It's Israel that concerns the Muslims.

So what are the Iranians now doing?  On Thursday they reported that they are going to upgrade their nuclear facility at Natanz and just told the UN agency about planning to install more sophisticated equipment.  Then they will be able to accelerate the processing of uranium.  This could speed enrichment by 2 or 3 times.

I would say that Netanyahu has his plate full.  To top it off, Yair Lapid, the new popular leader in the new party of Yesh Atid, who came in 2nd in the election, is following his own agenda.  He's pushy and seemingly controlling.  Chaim Weizmann once said that he was Prime Minister of 2 million prime ministers and Netanyahu is trying to work with one of them.  Everyone feels that Lapid is more interested in becoming the next prime minister and is making it hard on Netanyahu by setting impossible demands on negotiations to form a coalition.  Netanyahu is working on forming as broad a coalition as possible.

Lapid's strong hand is pinching out the 2 very orthodox parties from the coalition because he plans to have all men called into the draft and that means yeshiva students will all go into the army like others.  This Tal Law allowing exemptions went into affect only 10 years ago and the high court in 2012 had found it unconstitutional and expires in August anyway.  This will allow 14,000 more men to be in the army.   Arab Israelis are exempt.  Druze serve as well as other Israelis from 18.  Men serve for 3 years and women for 2. For a month out of every year they are called back in for the "milueem" period until they are 55.  .

It's enough to realize that missiles heading your way just might be also carrying biological and chemical weapons from very hateful and sick people, but to have all these other problems?  I think Israel is very lucky to have such strong people at the helm of their government.  We pray for them.