Stage Play in Portland: 25 Questions for a Jewish Mother 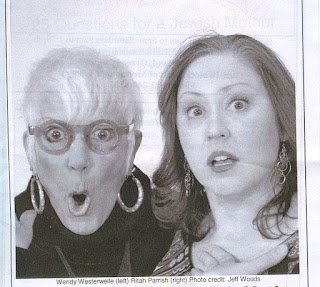 Wendy Westerwelle and Ritah Parrish
Nadene Goldfoot
I was treated last night by my son to see the stage play of 25 Questions for a Jewish Mother.  I went with my daughter in law and her mother, so we three had an hour and 15 minutes of laughter.  Also there was a van load full of Robison Home residents who also enjoyed the presentation.

This took place at The Sanctuary on Sandy Blvd who put on the Triangle Productions.  Their mission is to entertain and educate,  and indeed, they did both.

The acting was done by only 2 women, so it varied from a monologue a little.  Both Ritah Parrish, who played the part of Judy Gold, and Wendy Westerwelle, who took the part of all the other characters who were other Jewish mothers, were fabulous!  Supposedly they were from New Jersey.

The story is about Judy taking a survey of Jewish mothers and asking them 25 questions and getting a sundry of answers.  I found that Jewish mothers have changed from Portnoy's Complaint about mothers.  This mother doing the survey was a lesbian and both partners had decided to have children.  Judy was from an orthodox home.  Our audience was exposed to a whole new aspect of family life.

The program included 25 questions I was afraid might be asked, for in this community I was worried about the answers that could be related.  However, like they explained in the program,  it took a lot longer than the 30 allotted minutes for asking the questions, so they didn't ask all the questions in their hour and 15 minutes of portrayal.

The play has been running since February 7th and is over on the 24th.  If you get a chance, see it.  Contact is at triangleproductions1@gmail.com.
Posted by Nadene Goldfoot at 1:02 PM