The Seven Ghosts That Have Protected Safed 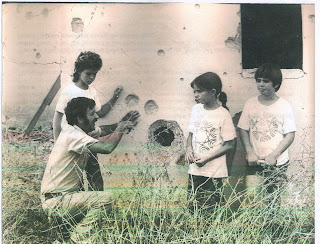 A katusha rocket fired from the Golan Heights by Syria  hit this kibbutz school and destroyed the kindergarten.  This is the first picture of the Yom Kippur War showing Nathan Fendrich of Eugene, Oregon with a child looking at the damage.

Nadene Goldfoot
I lived in Safed, Israel  from 1981 to the very end of 1985 and taught English at the local jr. high.  The Lebanese border is only 14 kilometers  or 8 miles away as a bird flies.  Kiriat Shimona lies the closest to Lebanon and has the department store that I loved which reminded me a little of Meier & Franks.  We drove up there occasionally and also visited the "Good Neighbor gate."

The terrorists periodically had fired Russian katusha rockets from Lebanon.  They almost always would fall short and explode in the wadi.  One time there was a direct hit on an abandoned warehouse, and another time one hit an electric pole.  As I was driving up to Safed for the first time, I learned that a katusha rocket had fallen just two weeks before behind one of the apartment buildings we had just passed by.  It was then I realized that I was in dangerous territory.

During the Yom Kippur War from October 6th  to 25th in 1973, the katushas  landed a direct hit on the fuel pumps in the central bus station on the 2nd day of the war.  There was no fire, no gas tank explosion and the pumps remained workable.  The rocket had entered the air shaft in the only unoccupied apartment house in the block of 10 new buildings.  It damaged 2 apartments but nobody was injured.

The legend is that the 7 sons of Hannah, who were killed by the Greeks at the beginning of the revolt of the Maccabees slow down the rockets so they fall into the wadi without causing any damage.  They are buried with their mother on the side of the hill over which the katushas pass.

In 167-166 BCE The 7 sons of Hannah refused to commit idolatry when ordered by Antiochus Epiphanes to eat pork.  This was the time of the Macabees who rebelled at the time this happened.  Because they refused, they were terribly tortured and then executed.  Hannah had a chance to save her youngest son but didn't, and then died after he was executed. What they died for was the preservation of Judaism.  This story has become a favorite of Christians as well, who have built shrines in many parts of the world in their memory and that of their mother, who they called Salome, but Hannah in Hebrew.

Living in Safed, I was so grateful for having these wonderful 7 sons and their mother protecting us.  I knew they would stop any bombs coming our way.    The cemetery in Safed dates back 2,000 years.  A very old book with a map in it of the ancient burial ground was found in 1945.  The site had been covered over by rubble from an earthquake.  The Ari, Caro, Alkabetz and others are also buried there.  Who could not be protected with such souls in our cemetery?

We remember the Maccabee revolt with our holiday of Chanukah.