Spanish Inquisition of 1492 and Jews of Spain and Portugal 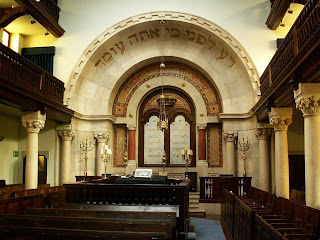 Today is the sad anniversary of the edict for Jews to leave Spain on March 31, 1492 known as the Alhambra Decree to the Jews living there. If  they converted to Catholicism, they could stay.  They were given 3 months.   Jews had inhabited Spain ever since  the destruction of the First Temple in Jerusalem  in 586 BCE.  More came in the 1st century CE.  Jews were treated well by the Visigoths after the fall of the Roman Empire as long as the Visigoths followed the Arian form of Christianity.  In 589 they switched over to Catholicism and changed their attitude.  From 612 on there was persecution of Jews under the councils of Toledo and they prohibited the practice of Judaism over a great part of the period.

Living under Muslim rule and thought of as "people of the book" allowed Jews to thrive considering they were also dhimmis or 2nd class citizens.   The Ottoman Empire actually started on February 31, 1299 with Osman I. We know it lasted 400+ years, ending in 1917 at the end of WWI.    Medival Inquistions started in 1184 and lasted until the 16th century.  The first was called the Episcopal Inquisition of 1184 that lasted until 1230.  Then the Papal Inquisition followed from 1230 following Christian Inquisitions.

In the 13th century, the Dominican order initiated constant anti-Jewish propaganda which was involved in the Disputation of Barcelona, including conversionist sermons and the implementation of the persecutory code of the 4th Lateran Council.  In 1391 there were waves of massacres, actual pogroms, beginning at Seville which were very bloody, that swept through the whole Peninsula causing hundreds of Jews to be killed and the rest to become baptised in order to live.  The synagogue was completely destroyed   These Jews were then called the"New Christians" and later referred to as "the Marranos," a derogatory term, or Conversos.  The Spaniards became jealous of them as they progressed in social and economic circles. and those jealous of them caused problems, thus the outbreaks against them.

What had happened long ago after the fall of Jerusalem in 70 CE was that the great centers of Jewish life became areas under Christian rule.  The expanding Christian kingdoms had a  more tolerant policy towards Jews and had found them useful as diplomats, financiers and agricultural colonists.  Samuel Abulafia in the 14th century and Isaac  Abravanel in the 15th century were court financiers and held in important place in the Spanish public life.

The Spanish Inquisition started in 1478.  Then  an edict came out written by King Ferdinand and Queen Isabella due to the Spanish Inquisition's main leader, Torquemada,  expelling the Jews from Spain in 1492.  "Ferdinand and Isabella took seriously the reports that some crypto-Jews were not only privately practicing their former faith, but were secretly trying to draw other conversos back into the Jewish fold."  About 150,000 Jews were expelled who found refuge mainly in North Africa and the Turkish Empire where their descendants (Sephardim) have continued to keep the Spanish traditions and language.  Others who could not leave remained hidden in their religion.

Many died in ships while trying to sail to another land.  The captains would charge them huge amounts of money and then throw them overboard in the middle of the waters to drown..  Before Jews left a rumor went about that they had swallowed large sums of money so that people had attacked many with knives to get the money out of their bodies.

It is questioned  if Christopher Columbus was Jewish.  He was an Italian who sailed with the help of the royalty of Spain in 1492 in the ships Nina, Pinta and Santa Maria..  He wrote letters to his son in Hebrew.  Obviously he must have had some sailors on board who were escaping the Inquisition, and he had to know about it.  He spent his time sailing on the seas.  By 1542 the Roman Inquisition would commence in Italy and last until 1860.

Those who remained kept their Jewish practices a secret.  They even went through baptism  of Catholicism in order to cover their identity, but in their hearts they were very Jewish.  In 1497 due to the stresses of the Inquisition,  many of those who had remained moved to Portugal, the neighboring country.  Some went to Navarre in 1498.  The Jews who settled in Portugal were probably there while it was still under Arab rule.  When it became a Christian state there were Jewish communities in Lisbon, Beja and Santarem.  Little is known about them until the 13th century.  Things were pretty peaceful till riots in Lisbon in 1373.  To enter Portugal the Jews had to pay a poll-tax but many were then held in the country and sold as slaves.

Among the most unfortunate refugees were those who fled to neighboring Portugal. In 1496, King Manuel of Portugal concluded an agreement to marry Isabella, the daughter of Spain's monarchs. As a condition of the marriage, the Spanish royal family insisted that Portugal expel her Jews. King Manuel agreed, although he was reluctant to lose his affluent and accomplished Jewish community. He had almost the entire community converted by force in 1497 by pain of death if they refused.  .  This means that many Jews were converted unwillingly in Portugal.  Only 8 were found that were expelled.  "The chief rabbi, Simon Maimi, was one of those who refused to convert. He was kept buried in earth up to his neck for seven days until he died." The actual Portuguese Inquisition is said to have officially started in 1536 and lasted until 1821.

The refugees of Portugal who escaped formed the Portuguese synagogues in London, Amsterdam, and New York in the 16th and 17th centuries.  At the end of the 18th century, Jews from Gibraltar and N. Africa moved to Lisbon.  Freedom of worship was permitted only after the Revolution of 1910.  Ashkenazi immigrants from Central and E. Europe arrived there in recent years, probably escaping the Nazis of WWII.    A tiny community at Faro existed.  A movement to rescue Jews was started in 1925 and in 1938,(the beginning of the end for Ashkenazi Jews in Germany)  a synagogue was built as their religious center in Oporto.  A large group was found in Belmonte.  Though most never left Judaism and have practiced secretly for this whole time,  many are starting to study Judaism more as they wouldn't have had the guidance of any rabbis.  In 1990 the Jewish population in Lisbon was only 300.

The Spanish Inquisition even chased Conversos to Mexico between 1571 to 1700's.  They executed  29 Judiazers and prosecuted 324 practicing Judaism there.  .

A limited Jewish immigration into Spain took place in the 19th century.  The law prohibiting building of any synagogues was finally abolished in 1909.  There are some small congregations in Madrid and Barcelona now.  The expulsion was officially revoked in 1931.  That means they kept Jews out of their country for a good 439 years.  The Jewish population in Spain in 1990 was 12,000. with more than half living in Madrid and Barcelona.  Many had come from North Africa and Latin America, where times were probably bad for Jews there.  The hidden Jews have endured at least 25 generations of keeping their faith a secret.  Now they are just starting to come out.

There is also evidence that the portuguese inquisitions was more brutal than the spanish. Ofcourse it lasted longer. Thank you. This date should be remembered as it changed the history of sephardic culture and it brought an end to a rich way of life, language and practice.