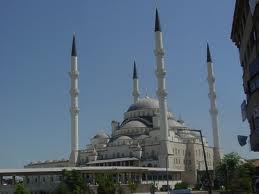 Al-Qaeda was planning to blow up the US Consulate, a church and a synagogue in Istanbul, Turkey but were thwarted by the security forces.  11 were arrested in a raid.  On April 2nd they had received explosives and had building plans stashed in several cities.  This is the former Osama bin Laden's terrorist group.  They believe in  "global Jihad and a strict interpretation of sharia law.

Taken were 5 rifles, 5 guns USB flash disks, CDS and a remote controlled explosive mechanism.  They were loaded for bear.

A previous attack was planned for and carried out on February 1st on the US embassy in Ankara by another terrorist group, the DHKP-C (a radical Marxist and anti-US armed group, The Revolutionary People's Liberation Front).  This was a suicide bombing which killed the Turkish security guard and injured another  The bomber was "Ecevit Shanli, a member of DHKP-C."  This is "considered a high-security post, and there are Turkish police present at all times."  Only the door received damage.   Germany and France's embassies are in the same area.

Istanbul, formerly Constantinople, is one of the largest cities in the world with a population of 13.9 million.  That's double Israel's population.  It was the capital of the Ottoman Empire and previous empires as well.  It lies between the Sea of Marmara and the Black Sea over 2,063 square miles of land that extends into Asia's continent. Ankara is the capital of Turkey and the 2nd largest city.  It's population is 4,338,620. It lies 280 miles SE of Istanbul.