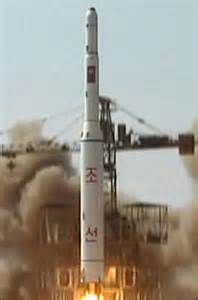 Word was just announced on CNN that a US intelligence report concluded that North Korea does have advanced nuclear know-how where it can arm a ballistic missile with a nuclear warhead.  This is a new revelation about this threatening and unpredictable communist regime.

Since North Korea and Iran have been very close since 2002 at least in their endeavor to create nuclear arms, this means that Iran must be almost or nearly just as close. Iran has visited North Korean and has been at the sites.   "Iran has been hiding nuclear work and sites since about the same time, although it was one of the treaty’s original signatories. Like Iran, North Korea was soon suspected of hiding things after that initial show of clean hands. It stiffed inspectors and made lame excuses for doing so. And, like Iran, North Korea built plants that generated fissile material that was useful for making bombs, but unnecessary for producing civilian nuclear power."  Iran just had an 6.1 earthquake with the epicenter in Kaki, 60 miles from Bushehr, where the nuclear plant built by Russia lies.  37 died and hundreds were injured, but they say the nuclear plant is okay.  They are proceeding with advancing their nuclear capabilities.

Today's  revelation came about when Rep. Doug Lamborn, R-Colorado read out loud what he thought was an unclassified parragraph from a secret Defense Intelligence Agency report that was given to some members of Congress.  It took him by surprise as he hadn't seen the report before and couldn't answer any questions about it.

The Pentagon press secretary, George Little remarked that it would be wrong to suggest that the North Koreas have fully tested, developed or demonstrated the kinds of nuclear capabilities referenced.  The USA has been closely monitoring their nuclear program and asks them to honor their international obligations.  This report is said to have come out in March.

This morning's Oregonian reported that North Korea hasn't tested many of its short-range Scud and medium-range Rodong missiles.  Also, they haven't flight-tested the longer-range Musudan with a range of 2,175 miles, either.  If the tests were successful it would show they could hit South Korea, all of Japan and US military bases on Guam.

The US and South Korean troops are on a high level of vigilance.  Monday is the birthday of North Korea's founder, Kim II Sung.  They often stage military provocations around such dates.  Japan is also on guard for a missile launch and have missile interceptors around Tokyo for a precaution.  The US military has 2 Navy missile-defense ships closer to the Korean Peninsula monitoring any missile launchings and to intercept any if they threaten us.

Kim has threatened to attack the USA, so we're not sure just how long a range their missiles might have.

You have to admire the residents of Pyongyang.  They are showing no panic.  People are busy planting trees and dancing in the plazas before the holiday.

General Martin Dempsey said that N. Korea has conducted 2 nuclear tests and several successful ballistic missile launches.  We have to assume the worst case by increasing our missile defense capabilities in the Pacific.

Obama said from the Oval Office that he preferred to see the tensions resolved through diplomatic means, but will take all necessary steps to protect the American people.  Today North Korea let out more war rhetoric and claimed it has powerful striking means on standby.  They obviously are trying to scare and pressure South Korea and the US into changing their policies.

Kim, the grandson of North Korea's founder, Kim II Sung, who took control after his father, Kim Jong II died in 2011, is trying to show the US, the world and his people that he is firmly in control in North Korea while trying to force the international community into concesssions in future negotiations.  Kerry is headed for East Asia where he will talk with officials in Seoul, Beijing and Tokyo about North Korea.