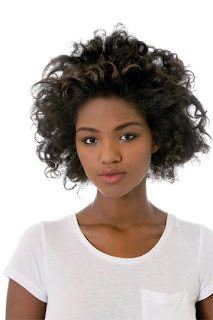 'There are many colors in Israel and it's important to show it to the world" Yityish (Titi) Aynaw, 21, an Ethiopian Jew  said on stage ...when she won the Israel Beauty pageant and became Miss Israel.  Titi is a member of the Falah Mura who made aliyah to Israel at age 12 in 2004.  Her family never felt at home in Ethiopia.   Her name, Yityish in the Ethiopian language of Amharic means "a look to the future."  She has already served as an officer in the IDF and now is a manager of a fashion store.

Coming to Israel was not easy.  She had to learn Hebrew and live in a modern society, so different from her home in Ethiopia.  Now she hopes to become a successful model and would also like to be the first Ethiopian TV host, an Israeli Tyra Banks.  Martin Luther King has been a role model for her.

Ethiopian Jews  had started to arrive in Israel in Tzfat in 1981 when I lived there.  They came barefooted wrapped in white sheets. An empty apartment  was picked where clothes were donated and the new immigrants could try on clothing.  It didn't take them long at all to learn how to manage in our supermarket.

The history of Jews of Ethiopia (Abyssinia), a country in NE Africa which may also be "Cush" in the bible is said to go back to when the Queen of Sheba visited King Solomon sometime in (961-920 BCE).  It turned out to be a fruitful visit and she and her retinue returned to her homeland with some pregnancies.  The emperors of Ethiopia have claimed descent from Menelik who was the son of their Queen of Sheba and King Solomon.  They even have used the title "Lion of Judah."  These Jews are referred to as Beta Israel (House of Israel.).  Most of Ethiopia is Christian and Muslim, so these Jews have suffered some discrimination.  They were called "Falashas, (the aliens, invaders.)  The government had caused them imposed exile and starvation.  There have been stories about them that were heard in Europe from the early Middle Ages.  Authentic information came from James Bruce in 1790.  They lived in some village communities practicing handicrafts and agriculture.  Once the 1/2 million Beta Israel ruled around Lake Tana.

The people I saw coming into Safed in 1981 were dark skinned with very Caucasian features.  By 2006 Tzfat, a city of 28,094 had 1,439 Beta Israelis which was 5.1% of the city population.  The Beta Israelis were brought to many Israeli cities.  They were small boned,  tall slender and beautiful.  After first recouping in the hospital, they acclimated themselves and in no time at all put on an art show in the city.

It was "Operation Moses" of the mid 1980's that this airlift took 20,000 to Israel.  This operation could not be completed because of complications.  Later, they had Operation Solomon in 1991 which brought in 15,000 were flown to Israel.  Yityish was in the some 2-3,000 that had to remain, perhaps not out of their own choice.

Their Judaism that they practiced was based on literal obedience to Torah injunctions.  They knew nothing about post-biblical Hebrew literature.   They only knew a few words of Hebrew.  Their Torah was written in Ge'ez , Old Ethiopic.  The even still practiced sacrifices on certain occasions by their priests, something dropped by the rest of us since the fall of Jerusalem in 70 CE.  They did not know about Hanukkah, Purim, etc.  This helps to date their becoming Jewish.  DNA tests have not determined any major Jewish haplogroup, such as J1.  It is thought that that they descended from Jewish converts before Christianity.