Part I: Remembering Germany in the Holocaust and the British Kindertransport 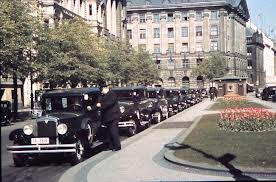 Berlin in 1930's
April 8th is designated as Yom Ha-Sho'ah or Holocaust Day, a time set aside to remember what had happened to us in WWII.  It will be most likely commemorated on the 7th which is a Sunday.

In January 1933 Hitler and his National Socialist German Workers Party came to power in Germany.  Little did people know that this meant the near end of the Jews who lived in the world, for he set about to exterminate all.

Jews had lived in the German lands since Roman times when Jerusalem fell to the Romans in 70 CE.  By the 19th century German Jewry finally gained full civic-equality in a united Germany in 1870.  Though there were strong feelings of anti-Jewish prejudice, the political anti-Semitic groups met with failure.  A major part of the German people valued their Jewish citizens and most at least tolerated them.  WWI started in August 1914 and German Jews enlisted to serve the country they loved.  They lost the war, and this outcome changed Germany.

3/4 of the Jews had jobs in trade, commerce, the financial sector and the professions.  My uncle's parents were sausage-makers and did things like walk a cow to market, something he at age 18 was arrested for.  Jews were 3 times better off than the general population in having a salary coming in.  Jewish firms were outstanding in the department store business and owned 25% of smaller retail outlets and 30% clothing stores.  Non-Jews got the impression that Jews were "everywhere."  In Berlin Jews were the face of commerce, medicine and law but in reality were only 11% of all doctors and 16% of all lawyers in Germany.   In actuality, today Jews make up only 0.02% of the entire world population since the Holocaust slaughtered 6 million of them.

Rural areas had their above average Jews as well.  Jews handled 1/4 of all wholesale agricultural trade and in some districts cattle dealing and grain marketing was largely in Jewish hands.  These Jews were usually better off than the farmers and artisans around them and they often imported modern things and ideas into the countryside.  Several great publishing houses were Jewish-owned.  Jews were above the normal % among writers and journalists, in the theater and in the film industry.  (These areas found Jews in them because for so long Jews have not been allowed to own land, and their talents developed in these fields.) Jews were found to be in the middle class and rather conservative, but in politics they supported the liberal and democratic center parties or the moderate socialist party.

A big section of the German Jewish population was poor.  The depression hit the Jewish community as well. In 1932 over 31.5% of Jewish employees in Berlin were out of work.  1/4 of the Jews were on charity. Of these, most were recent immigrants from Poland and Russia that came between 1880 and the 1920's.  In 1933 these immigrants made up 1/5th of all German Jews.  They were small merchants, itinerant traders, shopkeepers, tailors, artisans and industrial workers.  Most were religiously orthodox.  Most of  the long established  Jews of Germany had belonged to the Jewish Reform movement or the Liberal movements.  German Jews had become less and less religiously observant as they had become integrated into German society.

By the postwar years, 25% of Jewish men and 16% of the Jewish women were marrying outside their faith.  That they had become acculturated and assimilated made the Jews shocked with disbelief by the strength of the anti-Semitism that came along with  Hitler.  We all know the story that 6 million Jews were rounded up and forced into ovens.  People my age grew up with nothing in the newspapers but the progress of American troops fighting in Europe.  Few of us heard about how Britain saved more than 10,000 Jewish children, most being Jewish.  .

Norbert Wolheim and Nicholas Winton were heroic rescuers of children from the Holocaust.  They brought out children from Germany, Austria and Czechoslovakia.   Only 25 years old, Wolheim  began organizing the Kindertransport in Berlin.  He acted as an escort on several occasions and returned each time to Germany to continue his work, putting himself in harm's way.  He ended up in Auschwitz with his wife and 3 year old son, and he alone survived.  29 year old Winton was a London stockbroker who visited Prague in December 1938.  He was " horrified at what he saw in the refugee camps, so struggled to bring 664 Czech children to England by flouting British government rules and bureaucratic red tape."  After the war most of the children found out that their parents had been   murdered in the concentration camps.

Lory Cahn nee Lory Gruenberger was born in Breslau when it was still part of Germany.  At age 14 she was slated to leave for England on the Kindertransport but at the last moment her father couldn't bring himself to part with her and at the end of 1941 she and her parents were deported to Theresienstadt where she was confined for 1/12 years before being separated from her parents.  Then she was sent to Auschwitz.  For the rest of the war she was transferred from one concentration camp to another until she was liberated at Bergen-Belsen weighing 58 lbs.  She married and and moved to  the USA.

After living in Germany what seemed to be forever, Germany turned on the Jews.  German Jews could not get out easily.  It took tons of money at a time when marks were worthless and other countries would not take them in because they were Jewish.  Even the USA had a quota with the demand that they be backed up by someone who took the responsibility of their financial situation.  "Most foreign countries, including the United States, Canada, Britain, and France, were unwilling to admit very large numbers of refugees."South American countries only took people with baptism papers.  And so, even in "Palestine," a ship was turned back that was full of Jews by the British!  At a time when we needed a country of our own, we couldn't get into the one designated by the League of Nations to be our Jewish Homeland.  G-d forbid it might upset the Arabs!

It seems to me that the Nazis killed off many of the employers of their country, making their economic situation even worse.  "The Nazis identified Jews as a race and defined this race as "inferior." They also spewed hate-mongering propaganda that unfairly blamed Jews for Germany's economic depression and the country's defeat in World War I (1914-1918)."

What surprises me is that Jews have returned to live in Germany.   However, after this horrific experience, Germany is dead set against its recurrence.  They teach about the holocaust in their schools.  Nazi worship is against the law.  Anything to do with Nazis is illegal today.  Even so, Neo- Nazis are on the rise in Germany.