Wiki Leaks Tell About 1975 and How Kissinger Felt About Israel 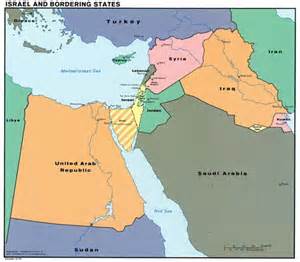 The United States has not really understood Israel's position being it is so tiny with so many neighbors who cannot bring themselves to accept her.  The situation is so different from the huge USA and its lack of worry with such nice neighbors as Canada and Mexico.  WikiLeaks tells us that Kissinger sided with the Arabs in thinking it was Israel that was holding up the peace process in 1975 from a cable .

In looking at history, one has to consider how many times Israel has had to go to war.  There was war the minute Israel was declared a state on May 14, 1948, but it had actually started on 29 November 1947 when the Arabs responded with violence to the UN resolution on Palestine, and lasted until signing of the Armistice Agreements in 1949.  That was The War of Independence.  Then on October 29th till  November 5, 1956 Israel was embroiled in The Sinai War.   The Six-Day War lasted from the 5th to 11th of June 1967.   The War of Attrition lasted from 1968 until the cease-fire  on 7th and 8th August 1970.  Even between wars were clashes along the frontier lines.  Arab terrorist organizations called fidayun and their supported Arab governments made constant forays into Israel to terrorize and sabotage.

On October 6, 1973, Yom Kippur, the holiest day on the Jewish calendar, when all Jews were in their synagogues, and out of the blue-Egypt and Syria attacked Israel.  On Israel's borders were so many enemies that they were equivalent to the total forces of NATO in Europe.  On the Golan Heights, 180 Israeli tanks faced 1,400 Syrian tanks.  Along the Suez Canal, 500 Israeli IDF were attacked by 80,000 Egyptians.  Israel was able to repulse the invaders and carry the war deep into Syria and Egypt..  The Arabs were supplied by sea and air from the Soviet Union.  At least 9 Arab states including 4 non-Middle Eastern nations actively aided the Egyptian-Syrian war effort.  Saudi Arabia and Kuwait served as the financial underwriters and also committed men to the battle.  The Saudis had 3,000 troops that went to Syria.  Libya violated Paris's ban on transferring French-made weapons and transferred Mirage fighters to Egypt.

Qaddafi gave Cairo over $1 billion in aid to rearm Egypt and pay the Soviets for weapons from 1971-1973.  Algeria sent 3 aircraft squadrons of fighters and bombers, an armored brigade and 150 tanks.  1,000-2,000 Tunisian soldiers were along the Nile Delta.  Sudan had 3,500 troops in southern Egypt.  Morocco sent 3 brigades to the front lines including 2,500 men from Syria.  Lebanese radar units were used by Syrian air defense forces. They also let Palestinian terrorists shell Israeli civilian towns from Lebanon.  Palestinians fought on the Southern Front with the Egyptians and Kuwaitis.  The Arabs lost 19,000 soldiers while Israel lost 2,688 in this battle.

Kissinger had the chutzpa to say in a cable from the US Embassy in Saudi Arabia on January 9, 1975 that they were analyzing the Israeli-Arab conflict and sympathized with the Arab position.  Israel was pictured as being panicky and suffering from a Samson complex.  I wonder if Kissinger remembers just who was helping Samson and why?  If he faced these odds, how would he have felt?  Well, with steely determination,   by themselves except for Ha Shem (G-d)  but  without any USA soldiers, Israel has managed to win all these gigantic attacks with its tiny force to the shame of the Arab armies of the Middle East.  When you know  that you are fighting for the survival of a very deserving group of people, you fight hard.  Like Golda Meier said, "We Jews have a secret weapon in our struggle with the Arabs; we have no place to go.   And I can add that even if we did have a place to go, they'd want baptism certificates like in WWII, or only allow a few in because of Jewish quotas.    Israel lost 10,068 soldiers during all the battles up to 1973.  The population of Israel started off with 650,000 in 1948.  The census of 1972 showed 3,164,000.  This little band of soldiers had to turn into the ancient Israeli warriors but fast and their leaders had to be like Joshua.

The Americans could not understand why Israel didn't consider the alternative of a peaceful accommodation with the Arabs. By this time  the USA sensed a pessimistic attitude from the Israelis towards peace.  Israel thought that they couldn't be expected to relinquish anymore land it had conquered in 1967 without Arab guarantees of security.  The USA's position immediately was that the Arabs would never give any guarantees and that war is inevitable.  The report uncovered blamed Israel for not making peace and disappointment with the Arab offer in Algiers for going too far in making concessions to Israel.

All the USA figured was that Egypt and Syria strongly were yearning for peace and wanted to work on reconstruction of their countries and that Prime Minister Yitzhak Rabin wasn't helping the Arab leaders who wanted only peace.  What the USA was blind about was that yes, they wanted a piece of the pie, all right;  all of Israel, considering that Israel was only a slim slice of what the original National Jewish Homeland was promised to be.  I say promised because it was accepted and voted on in the League of Nations.  Then Britain had the brilliant idea to give away 80%  of the property to an Emir who became king of TransJordan.

The USA actually considered a demilitarized Palestinian state would be so humiliating or detracting from their sovereignty.  That said, we then look at Jimmy Carter and his completely irresponsible insufferable collection of false information,  "Palestine Peace, Not Apartheid" which has done innumerable harm to Israel's chances in the world.  That   goes along with John Mearsheimer and Stephen Walt who wrote a book slamming Israel and even slamming the UN report that said Israel was in the right to keep the flotilla from bringing in arms.  They slammed the UN report as they sided with Turkey!

Here we are with John Kerry using his wiles to have Netanyahu innocently apologize to Turkey which has turned into such a ballagon of unacceptable expectations from Turkey.    The world seems to have a hard time being on Israel's side.

What I see is the continual anti-Semitic attitudes that have permeated US history since its inception.  It's just a big disappointment to see it  possibly stronger in our top government positions than in the general community.   Even more disappointing to me is that Kissinger is Jewish and lacks understanding of Israel's position.  It is inexcusable.   I expect everyone, Jewish and non-Jewish, to have a thorough background about Israel and how this came about.  Israelis must depend on their own gut feelings to preserve their lives and the life of their nation.

Resource:  http://www.jewishvirtuallibrary.org/jsource/History/casualties.html
http://www.ruthfullyyours.com/2011/09/18/professors-walt-and-smearsheimer-slam-israel-defend-turkey/
Facts About Israel 1973 from Division of Information, Ministry for foreign affairs, Jerusalem
Myths and Facts, a concise record of the Arab-Israeli conflict by Dr. Mitchell G. Bard and Joel Himelfarb
The Post: Wikileaks:  US blamed Israel for holding back peace in 1975 by Ariel Ben Solomon
Posted by Nadene Goldfoot at 10:31 PM