Part II The Holocaust-How It Got Started With Kristallnacht 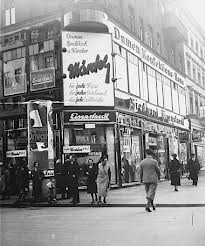 Jewish Stores in Berlin
The American Wall Street Crash of 1929 affected Europeans as well.  It had a devastating effect on the German economy which was very dependent on loans from American banks.  The loans were called in and German businesses and banks folded, so unemployment suddenly spun out of control. Political  parties in Germany from 1918 to 1924 were in political and economic turmoil. It was said that it took a wheelbarrow full of marks to buy a loaf of bread.   As the value of the German mark fell, savings of the middle class disappeared and unemployment had soared.  The far right parties opposed the Weimar Republic, hated democracy and socialism, resented the Versailles peace settlement that took away German territory, probably stolen in the first place by them, regarded modern culture as degenerate, which it was becoming, and believed that the Jews were behind all these ill, which they weren't.

State sponsored boycotting of Jewish businesses was allowed by Hitler on 1st and 2nd of April 1933.  If the Jews didn't fight in WWI from 1914 to 1918, they were fired from  civil service.  Many other laws pushed Jews from other areas of government employment, such as doctors working for state health plans.  Jews were "systematically purged from cultural institutions" after they were taken over by the Nazi Party.  Everyone was of the mind that this wouldn't last long.  July 1934 was when Hitler started a bloody purge of the SA( storm troopers).  August 20, 1935 was the enactment of the Nuremberg Laws against Jews.  The list is long.  One thing was that they couldn't marry a Jews or have intercourse with one.  If you had 3 or 4 Jewish grandparents you were also Jewish, even if you were a practicing Catholic!  One reason Jews had converted to Christianity was to evade restrictive laws on Jews that were in existence, but now even that didn't help.

In September 1935 Hitler announced in Nuremberg that Jews would lose their civil rights and would be 2nd class citizens.  For 2 years there was calm.  In  1936 Jews could still sit in cafes on the boulevards of Berlin and drink coffee while reading Jewish newspapers.  Few Jews felt the need to emigrate though in 1933 there were 37,000 who left Germany in a panic, but only 23,000 left the next year.    In 1935, 10,000 returned thinking it was all over.  Emigrating to Palestine were 7,600 in 1933 and 9,800 in 1935 but for the next 2 years only 8,500.  Then the emigration was held down due to restrictions imposed by the British who controlled Palestine.  The Jews were kept out while they let Arabs in without any documentation.

The start of 1938 found Hitler feeling stronger and meaner.  Austria was merged with Germany by occupying the country with his army.  Austria was home to about 185,000 Jews.  170,000 lived in Vienna, the capital.  Jews made up a little more than 3% of Austria's population but about 10% of Vienna.  They lived in 8 districts and in some were the majority.  62% were Viennese lawyers, about 62% were in finance and commerce, and almost half of the city's doctors were Jewish.  Jews were outstanding in trade, from corner shops to department stores here.  They made an easy target for anti-Semites and the socially disaffected.  Austria, where Hitler was born, was even more anti-Semitic than Germany.  Vienna had been ruled by Dr. Karl Lueger from 1897 to 1911, one of the most anti-Semitic politicians.

They came into the fold with  hatred for the Jews.  Soon after Austria's annexation, Jews were assaulted in the streets and ritually humiliated.  Anti-Jewish laws had been passed over a period of 5 years in Germany were enforced quickly.  Jewish businesses were shut down and sold off.  Apartments were seized and occupants evicted.  By August 1938, Adolf Eichmann, the SS lieutenant-colonel, was to organize the rapid emigration of Jews.  In 18 months he had 150,000 Jews stripped of their rights, property and money on their way to other countries who refused them.  .

Switzerland was afraid of Jewish immigration to their country in the autumn of 1938 so wanted passports marked with a J stamp, and Jews had to add Israel and Sarah to their names on all personal documents so that Nazi officials and immigration officers in other countries could identify a Jew easily.

In October the Germans moved against Jews of Polish nationality or origin.  They were rounded up and expelled to Poland, who didn't want them so refused to admit them.  They were left to die in the frontier zone.  This made the son of such people, Herschel Grynszpan, who lived in Paris, so mad that he got a revolver and went into the German Embassy on November 7th and shot the first man he met, Ernst vom Rath, who died 2 days later.

Now  Josef Goebbels had the reason to start a pogrom against the Jews.  During November 9th all over Germany and Austria were thugs beating up Jews and Jewish men were arrested.  The SA and SS men set fire to 1,000 synagogues, smashed 7,500 Jewish owned businesses, invaded and ransacked Jewish homes and assaulted and killed over 90 Jewish men.  30,000 Jewish men were herded by the police into concentration camps until ransomed out by their frightened families.  Ursula Rosenfeld's father was taken to Buchenwald concentration camp where he was beaten to death.  Jack Hellman's father got out of the camp alive, somehow.  This was Kristallnacht.  The main streets were littered with broken glass of Jewish shops.

The Jewish community then had to pay a huge fine for vom Rath's death and had to compensate all damage. Following this were many laws taking away any way to make a living.  They couldn't get out of the country.  Countries were so anti-Semitic and wouldn't let them in. as pro-German fascist movements ruled in them.  In Evian, France in July 1938 a conference was held about this refugee problem which was a failure.  President Roosevelt had called for it.  The 32 countries that had delegates there wouldn't accept any Jews except a very tiny number.  This was the background to take children from Germany and Austria to England.

Roosevelt recalled the US ambassador in Berlin.  Neville Chamberlain,  who was always wrong on visualizing what the Germans would do,  told his sister that he was "horrified by the German behavior to the Jews."  By the 25th of November, Viscount Samuel asked through the BBC Home Service for foster homes and received 500 offers.  Any home that was clean and the family looked respectable was treasured and acceptable.  By the end of August 1939, the organization, RCM, ran out of money and couldn't take in any more children.  WWII  broke out a few days later.  Hundreds of children waiting on trains were trapped.  Homes in England were bombed and the government then made plans to evacuate children and pregnant women to "safe" areas.  So the children of the Kindertransport were caught in this great migration to the countryside as well.

Continuing with Into the Arms of Strangers by Mark Jonathan Harris and Deborah Oppenheimer
http://www.jewishvirtuallibrary.org/jsource/Holocaust/nurlaws.html
http://en.wikipedia.org/wiki/Nuremberg_Laws
Posted by Nadene Goldfoot at 7:58 PM