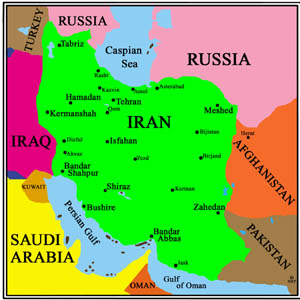 Many of us are most concerned about Iran having nuclear facilities.  The people of Iran should be also, since Iran is a vast earthquake zone. Hold on!  "Iran  is one of the most seismically active countries in the world, being crossed by several major fault lines that cover at least 90% of the country."

They were just hit with their 2nd earthquake since their first on April 9th which was a 6.3 near the Bushehr nuclear power station. In that one, 37 people were killed and 850 were injured.  That makes 2 big earthquakes in one week!  Since June 22, 2002 they have had 13 earthquakes counting this past week's two.  All but 2 have been 6.0 or more.  Those 2 were a 5.3 and a 5.9, nothing to sneeze at in such an unstable area.

7.8 is a powerful earthquake.  The epicenter was the border area of SE Iran between them and Pakistan.  13 people were killed and 20 injured in Pakistan on Tuesday. A few hundred homes collapsed in Mashkeel, Pakistan.  Homes  are made of mud  in Panjgur, Pakistan.  Hundreds of homes and building in New Delhi, India and the Gulf Arab states were destroyed from it.  People got out of their building in Qatar and Dubai.   This was far from Iran's nuclear facilities, but had to have been felt and affected if the range is this far.   The distance between New Delhi, India to Iran is 758 miles or 1,219.62 kilometers.

Luckily the area is not like New York.  The land is a sparsely populated desert and mountain region.  They have not had any communications, so haven't heard about any deaths yet.  Iran has a population of 76,923,300.

Iran's nuclear facilities are centered in central Iran or the west side.  This includes Bushehr, the nuclear power plant on the Gulf coast.  They say they have good safety standards.  We have our doubts.  The IAEA say that they have been informed that there was no damage to any of the facilities.    It just happens that they sit on a fault line.  They had a 6.6 quake in 2003 that flattened Bam, a city in the SE and 25,000 were killed in that one.

Posted by Nadene Goldfoot at 11:17 AM