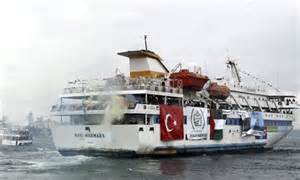 Yesterday Secretary of State John Kerry told Turkey's leaders that it was vital for peace that they and Israel get their diplomatic relationship "back on track."  Kerry thinks that Turkey could be "an important contributor" to peace, but Yuval Steinitz, Israel's minister of international relations, thinks this is a "poor idea."

"On Feb. 28 Prime Minister Tayyip Erdoğan, speaking at an international conference in Vienna said that Zionism was a “crime against humanity” like fascism, which triggered reaction in Israel and among the Israeli lobby in the U.S. and Europe. The same day U.S. Secretary of State John Kerry said during a joint press conference with his Turkish host,  Ahmet Davutoglu,   that the U.S. and Turkey do not share the same views on Israel.

Prime Minister Recep Tayyip Erdogans of Turkey did visit Israel in 2005 and was a peace negotiator.  Events leading up to the present have not been good for these two countries.  The 2001 formed Turkish government, AKP (Justice and Development Party)  has moved towards the Muslim Brotherhood ideals more than originally, meaning that they have become more aggressive towards Israel.  In fact, many countries of the Middle East have become more Muslim and less secular.    Turkey  remains  pro-West, siding with Saudi Arabia, USA and Qatar on the Syrian problem by siding with the rebels against the Syrian government.  Religiously, compared to the rest of the Muslim world, they are called moderates.

In 1949 Turkey was the first country to recognize Israel.  Our relationship fell during the 2008-2009 Gaza War.  By May 31, 2010 a Turkish group  decided to be a part of a flotilla  of 663 people from 37 nations of pro-Palestinian activists sponsored by the "Free Gaza Movement" to bring supplies to Gaza. Six ships made up the flotilla. Five of the ships allowed boarding and were just passive resisters.  Israel had already put out word that they would board all ships to check and make sure that weapons and ammunition was not being brought to Gaza. The ships were told to go to the port of Ashdod for inspection, but this was ignored by the Marmara.   The Mavi Marmara with Turkish activists on board had the goal to break the Israel-Egyptian blockade of the Gaza Strip.  Israel had to board from a helicopter as it was such a large ship but just used speedboats for smaller ones.    Israel had 13 naval commandos board the Marmara and met with violent resistance from 40 activists armed with iron bars and knives.  10 of the Israelis were wounded, one seriously, while 9 activists were killed.  Eight of them were Turkish nationals and one was a Turkish- American.  Others were wounded.

"The Israeli military later said the soldiers were not expecting trouble and had paintball guns as their primary weapons while handguns were only for an emergency. Two activists grabbed the handguns away from soldiers and shot two of them, the military said at the time. Both activists were then shot and killed."

"A United Nations report, after analysis of both Turkey and Israeli national investigations, concluded that the Israeli blockade was legal, but that Israel army used excessive force in this incident by firing stun and smoke grenades from the Israeli army's speed boats and helicopters before boarding into flotilla and conducted live fire rounds from the helicopters before or after boarding, though the flotilla was still in international waters.   The report also mentioned "serious questions about the conduct, true nature and objectives of the flotilla organizers, particularly IHH.-Turkey's Marmara."

Erdogan took the side of the pro-Palestinian activists on the Marmara and called this "state terrorism" and would lead to irreparable consequences in bilateral relations.  By September 2, 2011, Turkey's diplomatic ties with Israel were downgraded and they suspended military co-operation after the UN report was released.  Israel's comment was that "Israel hopes to find a way to overcome the dispute and will continue to work towards this goal.  Turkey demanded an Israeli apology and compensation over this.  Israel refused to give one.  Turkey was the partner in this flotilla as the organizers were the Turkish Foundation for Human Rights and Freedoms and Humanitarian Relief. (İHH)  It is known that much of their money goes to Palestinian terrorists.  One avenue of that is the Union of Good.

Along came Kerry right after becoming Secretary of State and the Obama March visit in Israel.  Israel apologized.  An apology from Turkey has not been heard or suggested.

Israeli and Palestinian officials were hostile Sunday to the idea of a Turkish role in peace talks.  US and Turkish officials had differences of opinion about how to proceed.  Turkey is demanding that Israel lift its embargo on Gaza.  Erdogan plans to visit Gaza soon.  Turkey is suing the Israeli military on top of everything.

When all Israelis moved out of Gaza in 2005 for peace between Israel and Hamas Palestinians, southern Israel was shelled by thousands of mortars, rockets and missiles.  This actually affected over a million of Israel's population.  A cease fire came about at the end of 2012, but has since been broken just recently.  Israel is not occupying Gaza, but has the right to keep out weaponry as it is used on its citizens.  Hamas has a charter that says their goal is to destroy Israel.

Besides the apology, "Israel has promised to compensate the bereaved or hurt and agreed to ease a six-year blockade on Gaza.   Erdogan said these gestures met his conditions for normalizing relations with its erstwhile ally. However,  Turkey holds onto lawsuits against the soldiers.  They are filed against 4 of Israel's most senior retired commanders and if they go through would get life sentences.  Israel wants these dropped.  "Israel has called this a politically motivated "show trial."  One of the wounded on the Marmara, Cogas, commented " "Unless these soldiers are punished and the blockade is lifted, we won't accept compensation."

In my opinion, if the Marmara hadn't sided with Palestinian terrorists who shell Israeli civilians  constantly and broke the law with their flotilla, they wouldn't have had any dead or wounded.  When you play with fire, you get hurt.  This has not been the way to react to Israel's pain and suffering if they were allies.  It was not Israel's goal to kill or harm anyone, but when they were physically attacked, they had to react to defend their own lives.  Now all these demands are for one purpose only; to show that they have power in the Middle East and can bend Israel to their will.  Everyone is vying to be the most powerful; Egypt, Syria, Qatar, Saudi Arabia, Iran and Turkey.  This would be a coup for Turkey, a country with 73,722,988, who are 99% Sunni Muslims to hold over Israel's 7.4 million of which  6 million are Jews.

Rachel Hershfeld writes in Arutz Sheva that the meeting is delayed until April 21 or 22. The 40 compensation cases add up to 10 million Turkish lira with more possibly coming. Masa Cogas, one of the activists, said that until the blockade over Gaza is removed, they will not even discuss compensation. My comment is that they attack and expect us to pay. Kerry's insistence on an apology didn't end things at all. They just started more demands.