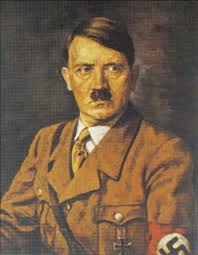 Hitler
"The earliest use of the phrase “Final Solution to the Jewish Problem” was actually used in an 1899 memo to Russian Tzar Nicholas about Zionism.  The Nazis decided on their final solution supposedly in 1942.

"The Nazis established ghettos in occupied Poland. Polish and western European Jews were deported to these ghettos. During the German invasion of the Soviet Union in 1941, mobile killing squads (Einsatzgruppen) began killing entire Jewish communities. The methods used, mainly shooting or gas vans, were soon regarded as inefficient and as a psychological burden on the killers." The Warsaw Ghetto from July 22 to September 12, 1942, killed 300,000 Jews.

Camps built by the Third  Reich,  mostly between 1939 and 1942, were intended to hold large groups of prisoners without trial or judicial process, including Jews, gypsies, Slavs,  prisoners of war and many others such as Jehovah's Witnesses, seen as undesirable by the occupation administration.

From April 1940 to the end of the war Jews were put in camps that were either classified as Labor, Extermination or Concentration camps all over the world in Austria, Belarus, Belgium, Czech Republic,  Channel Islands, Croatia, Estonia, France, Germany, Italy, Latvia, Lithuania, Moldova, Netherlands, Norway, Poland,  and Ukraine.  This is only a partial list.  Jewish Virtual Library writes: "It is estimated that the Nazis established 15,000 camps in the occupied countries."

The most well known extermination camp was Auschwitz-Berkenau in Poland which operated from April 1940 to January 1945.  Also in Poland were Majdanek and Treblenka and Warsaw, all well known extermination camps with the ovens.    1.2 million Jewish children died in the Holocaust.   "Anne Frank and her sister died at Bergen-Belsen in March 1945, one month before the camp was liberated in April 1945."

Croatia had the Jasenovac Concentration Camp that was really an extermination camp for Jews, Serbs and Gypsies from 1941 to 1944.  They killed all 100,000 prisoners.

Germany itself had many Labor camps and a few concentration camps.  It is possible that this is why the citizens did not know what was happening to the Jews, but so many died even in the so called Labor camps. For instance, Bernburg in Germany, listed as a collection point from April 1942 to April 1945 had 100,000 deaths.

"Many Jews were subject to gruesome medical experiments. For example, doctors would bombard the testicles of men and the ovaries of women with X-rays to see the impact of different doses on sterility. Nazi doctors would break bones repeatedly to see how many times it could be done before a bone could not heal. They hit people’s heads with hammers to see what their skulls could withstand. Experiments were conducted to determine the effects of atmospheric pressure on the body. Prisoners were injected with different drugs and diseases, and limbs were amputated and muscles cut for transplantation experiments. I don't think any survived these ordeals.   Today reference to or use of the Nazi research is considered unethical."

"Even after the Allies arrived, many concentration camp prisoners were beyond help. In Bergen-Belsen, for example, 13,000 prisoners died after liberation. Nearly 2,500 of the 33,000 survivors of Dachau died within six weeks of liberation."

"Historians  censured American Jewish leaders for not speaking out on behalf of their brethren during the Holocaust."  Roosevelt has been accused of abandoning Europe's Jews during WWII.  It has been mentioned many times that the Roosevelt Administration refused to bomb Auschwitz. "due to the Allies’ indifference to the fate of the Jews rather than the practical impossibility of the operation., said author David Wyman. "  Bauer, a historian, now feels that " essentially, only the ultimate defeat of Nazi Germany could end the annihilation of the millions."  However, what he could have done was to change the quotas and let in more Jews into the country. The requirements were so hard to get into the United States then, and did not change.

In June 1939 Roosevelt " refused political asylum to more than 900 passengers aboard the German ocean liner St. Louis. The passengers, nearly all of them Jewish refugees, had the lights of Miami in sight when the United States government refused them permission to disembark. Roosevelt did not respond to pleas for help. The ship returned to Europe, and the Holocaust claimed more than a third of those who returned to the Continent. Evidently he had made plans as early as 1938 to help the Jews through resettlement but not to enter the USA, but this fell apart by 1940.  It was an idea but wasn't developed. At the time the USA was also quite anti-Semitic.


BOOKS TO READ
The War Against the Jews by Lucy Dawidowicz. *
While Six Million Died by Arthur D. Morse
Abandonment of the Jews by David Wyman

Posted by Nadene Goldfoot at 2:38 PM

" You had to have a sponsor in the country you were going to who would promise that one would not become a burden on the government. You had to get a visa from the State Dept or government to be allowed in. Then you had to get an exit permit from the Nazis. All this had to come together because they were all bureaucratic measures and had a time span after which they would expire. You had to collect all these things together so they would be operative at the same time and it usually didn't happen. from Lore Segal in"Into the Arms of Strangers" by Mark harris and Deborah Oppenheimer