For over 60 years Israel has been sporadically attacked by surrounding Arab countries and Israel has fended them off. Not once has Israel tried to be the demon in the neighborhood by attacking others over want of their land or produce but only in defense of their lives. Daniel Pipes writes that the conflict will be resolved when one side gives up, and certainly recommends that it's the Palestinians that do that.

The only thing this tiny country has ever asked for is acceptance with a stoppage of attacks that try to eliminate it.

The U.N. and now USA are not helping the situation at all. Instead they take the side of the aggressors. This has happened through the Oslo peace process of 1993-2000 and pressing for the Israeli withdrawls from Lebanon and Gaza and now the stoppage of building activity in Israel's own capital, Jerusalem. All this time there has been no agreements with Palestinian Abbas about a future Palestine and any promise not to attack. As I see it this is an impossibility as the Palestinians are divided between Hamas and Fatah anyway.

I see no pressure from the U.N. or USA on the Palestinians to accept peace and stop attacking Israel. Instead, all the pressure has been on Israel to give up this and give up that which it has done.

American citizens are at the point of finally realizing that there are other types of energy in the world and the future is saying not to rely on the Arab oil. The need to appease the Arabs is waning. Perhaps it's time to take off those rose-colored anti-semitic glasses and realize just who has been the bully in the playground.

The latest remark from Abbas is that he wants to work with Netanyahu, and Israel has immediately halted work in Jerusalem to a large degree. I've even read now where Hamas is trying to control terrorist groups still attacking Israel and having problems with them, which is a switch and surprise to me.

I don't know if this is true or just a rumor, but hope it is a sign that the Palestinians are finally seeing that they could live a better life if they embraced peace. I see that Egypt is not handling them with kid gloves and that could be helping. They haven't just sat by and allowed the tunneling to go by the boards but have killed those they caught in them.

It behooves me that everyone has lambasted Israel and treats it like an aggressor when it's the other way around. Because they have been able to defend themselves against outrageous odds is amazing to me. The United States thought it was bad during the 2nd WW when we were fighting the Germans and the Japanese. Here Israel has had to defend itself from all the Arab countries which add up to seven or eight at a time. Also, they have done it with their own manpower. Not once has any American soldier had to be involved. Now the greatest threat to Israel is Iran who is a leader of anti-semitism and has or soon will have atomic weaponry. Of course so many religions and universities have been climbing on the bandwagon of hatred by wanting divestment with Israel and for why? What are they showing us other than contempt? They're showing that they side with the bullies. Yes, I'm calling it anti-semitism. Knowing that Israel is a Jewish country has caused non-Jews reason enough to side with anyone else, no matter who they are and what they stand for without reasoning why.

Peace depends on accepting this tiny country that had been originally declared a state in the UN May 14, 1948, 62 years ago.

Reference: http://www.thejerusalemconnection.us/blog/2010/04/29my-peace-plann-an-israeli-victory.html
Posted by Nadene Goldfoot at 10:57 AM No comments: 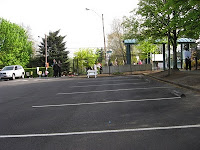 The AIPAC yearly dinner was held last night at the MJCC. As usual the people chanting "free the Palestinians" were outside along the sidewalk as we entered the parking lot. There were lots of policemen patrolling outside to make sure we were all safe.

What was great was being able to speak to a high school student from Portland who had gone back east to an AIPAC meeting and there found out we are good people and not the sort that the chanters outside would have her believe. She learned a great deal of history about Israel.

The dinner was sold-out. We had some important speakers who brought us up to date as to the situation in Israel and in respect to our relationship with our USA. The welcome was by Sheryl Langerman. Ken Kwartler and Sharon Ungerleider were the Oregon State chair and council members who spoke. Steve "Rosy" Rosenberg was event co-chair and also spoke as well as AIPAC's national president, Lee "Rosy" Rosenberg. A special guest speaker was Joey Freeman, a student at the U of C, Berkeley who I predict will someday be the next president of AIPAC. He was such a good speaker. Yossi Klein Haleve is a senior fellow at the Shalem Center and gave a great speech.

The dinner itself was fantastic. We had a chocolake cake with razzberry sauce that was to die for. I'd sure like to have that recipe.

Posted by Nadene Goldfoot at 10:01 AM No comments:

Egypt's Zahi Hawass, curator of Cairo's museum in ancient history who has been seen on television, is saying that the recent cemetery of pyramid builders found prove that Egypt had no slavery. The burials they have uncovered shows that they were well treated people. He forgets that we have the written record in the bible of their treatment and that we were slaves for 400 years.

If one studies Egyptian history and compares it to Jewish history you will find that the Egyptians would erase monolith scripture if it did not satisfy the aims of the next pharoah. Their history always put them in a good light. In Jewish history the errors of kings managed to get into the book. Nothing was left out. Good and bad were mentioned. It's quite a psychological study. Here they are, interpreting their findings in the new cemetery positively, denying any slavery knowing full well that slavery was the accepted fact of life in that period of history and well into our own.

Bob McDonnell, governor of Virginia is now saying that they are celebrating Confederacy History month in this month of April while never mentioning slavery and secession from the Union, the two most important facts concerning their development. He urges his populace to recall their days as members of the Confederate States of America. In other words, he wants to remember the good old days of slavery and fighting against the Union.

The Palestinians are doing the same thing. They are fighting to have their own state because the people they came to work for have theirs. Forget the fact that the Jews waited for 2,000 years to re-establish a state they once had but lost by being overthrown by invading Roman soldiers. The Palestinians were members of all the surrounding territory and only a few were natives. They came to "Palestine", a name created by the former Romans to erase the Jewish presence, to seek employment with the Jews who were building and establishing their lives. They probably told great stories of their history to their children and eventually came to believe them themselves. Now they have more rights with the gentile world than the Israelis do. They are seen as the underdog, and in reality they have become the bully.

Let the buyer beware. Believe history not from one book but get viewpoints from many. Understand what the goals of the writer are. Where is he coming from? What viewpoint? Most people are so gullible that they will believe whatever is in print or even what they hear. Isn't it true that witnesses to a crime will each tell what they saw in a different way?


Reference: http://www.drhawass.com/events/cemetery-pyramid-builders in Cemetery of Pyrramid Builders
Oregonian newspaper, 4/9/10 A confederacy of dunces perhaps? by Gail Collins
"From Time Immemorial" by Joan Peters-book
Posted by Nadene Goldfoot at 8:29 AM No comments: