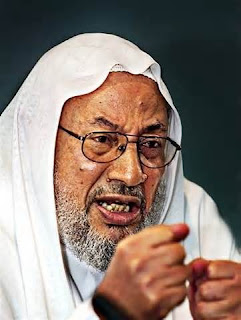 Kevin McCullough just had a video interviewing Brooke Goldstein, the CEO of Law Fare Project, telling about the man I have been most concerned about for several years who spreads hatred for Jews; Qaradawi, who the ADL calls a Theologian of Terror. He is old and must use a wheel chair but has said that he would kill a Jew with his bare hands if close enough to one.  He has a TV program from Qatar where he lives as he had been out of favor with Egypt long ago.

His Muslim Brotherhood pals are some of the heads in the White House National Security programs.  This is appalling!  Let's not forget that Huma Abedin is working right under Hillary Clinton.  She has family ties with the Muslim Brotherhood.

Goldstein mentioned names such as Arif Alikhan, born in Pakistan-"Arif Alikhan" who "is currently the Deputy Executive Director for Homeland Security, Law Enforcement, and Fire/EMS at Los Angeles World Airports", Rashad Hussein, Imam Mohamed Magid, Eboo Patel;  all with important rolls in our national security, and  " Kareem Shora, a devout Muslim, who was born in Damascus, Syria, as ADC National Executive Director as a member of the Homeland Security Advisory Council (HSAC)."

Sheik Yusuf al Qaradawi was banned from the USA before Obama took office.  He is a big leader in the Muslim Brotherhood movement.  He's also president of IUMS (International Union of Muslim Scholars).   This is the man who has praised the Holocaust motivation and hopes to better their goals.  He just issued a fatwa (religious ruling) to back Morsi, which is of course what the Egyptians are against, more religious rules or Sharia Law governing their country.  One of Qaradawi's IUMS vice presidents is Shaikh Prof. Al Abdullah Mahfoudh bin Bayyah who just had a meeting at the White House and seems to be advising the staff on Al Qaeda.   This is actually his 2nd time to be granted an audience and sit in on meetings and adding his thoughts on poverty and the al Qaeda narrative.

This is one of our president's strategies which he even commented on in his Cairo speech.  Obama has been defending the Muslim Brotherhood since Cairo, a time when they had been outlawed in Egypt.  It's like some sort of Muslim Outreach program.  Since that time, Obama has been continuing to back radical Muslim groups.

One terrifying move that has been happening is the slow decay of our 1st amendment rights of the freedom of speech that has been noted by the Law Fare Project.  Such people as Peter King, former Republican Representative "where he drew attention in early 2011 for holding hearings on the extent of radicalization of Muslim Americans. He also sits on the Financial Services Committee and the House Permanent Select Committee on Intelligence. He stepped down after his seventh year as Homeland Security Chair because of self-imposed Republican term limits. He remains a member of the committee"  Also, Michelle Bachman, Republican Senator who "In June–July 2012, along with several other Republican legislators sent a series of letters to oversight agencies at five federal departments citing "serious security concerns" about what Bachmann has called a "deep penetration in the halls of our United States government" by the Muslim Brotherhood. They requested formal investigations into what Bachmann called "influence operations" by the Brotherhood and have spoken about such things.   They are faced with being called Islamophobics by the pundits.  The Law Fare is monitoring the use of our laws that are being used as weapons of war through lawsuits on people who dare to speak out about what is going on in Washington.  With our system of 3 powers, the President, the Senators and the higher Court of Judges, each is supposed to monitor the other.  This seems to be breaking down and one group is threatened.

Remember,  "The First Amendment (Amendment I) to the United States Constitution prohibits the making of any law respecting an establishment of religion, impeding the free exercise of religion, abridging the freedom of speech, infringing on the freedom of the press, interfering with the right to peaceably assemble or prohibiting the petitioning for a governmental redress of grievances. It was adopted on December 15, 1791, as one of the ten amendments that comprise the Bill of Rights.

Posted by Nadene Goldfoot at 11:42 AM