Kiev is the capital of the Ukraine.  It was a Russian city at one time.  It's possible that the Khazars founded it in the 8th century.  Khazaria, ruled by Bulan, had selected Judaism for the Royal Court out of the 3 religions of Islam, Christianity and Judaism to follow.  It had become a haven for Jews suffering from anti-Semitism in those days. They came to Ukraine from Khazaria, the Caliphate and Byzantium between the 9th and 12th centuries; from Central Europe in the 14th and 15th centuries, and from Poland in the 16th and 17th centuries.  Severe massacres happened there during the Chmielnicki and Haidamak uprising of the 17th and 18th centuries.   This state lay in what is the southern part of Russia on today's maps.  Jewish merchants had visited the Kiev  in the 9th and 10th centuries causing the Jewish population there to grow steadily, despite persecutions which started in 1113. 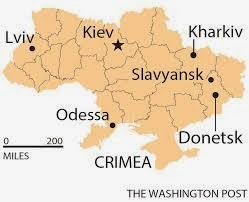 Jewish scholars from Kiev were known from the 12th century.  The community was then destroyed by the Tatars of Russia in 1240.  From the end of the 14th century, Jews were encouraged to return.  Both a Rabbanite and Karaite community existed there during the 15th century.

Expulsions were decreed in 1495, shortly after the 1492 ones from Spain by the Catholic church.  It happened again in 1619.  Peter the great permitted Jews to trade in Kiev from 1708.

In 1827, Kiev was excluded from the Pale of Settlement, which was land set aside in 1791 by Catherine II.  where Jews were allowed to live. it included Ukraine, Crimea, Latvia, Lithuania, Poland,  White Russia, Bessarabia, 25 provinces of Czarist Russia in all.   They were excluded from Russia.  Therefore Kiev became one of the largest Russian communities.

Sholem Aleichem (Shalom Rabinovich 1859-1916) wrote Fiddler on the Roof, about Jews in the Ukraine.  In his most difficult years, he created the character of Tevye the milkman in the story.

The Beilis Ritual Murder Trial occurred in 1913, which is hard to imagine happening at that late date.   Jews do not use blood in any way.  They do not eat blood, either, like some people do.  It's part of the laws of kashrut (kosher) not to do so, so when people say they use blood in matzos at Passover time, it's against all reason.  Here the Russians, who were very anti-Semitic, were accusing a Russian Jew, Menahem Mendel Beilis,  of Kiev,  of this.

350,000 Jews lived in Kiev in 1939, at the height of the Nazi days where Jews were definitely not safe anymore.  Most of those trapped by the Nazi advance were massacred in 1941.  Babi Yar is an example.  This was a ravine outside of Kiev where tens of thousands of Jews were killed in September 1941.  The massacre was a horror.  No memorial was erected until the 1980's to remind people of what had happened which was caused by anti-Semitism.  The Soviet poet, Evgeni Yevtuschenko, used it in his poem, "Babi-Yar" in 1962.  Later the event was used in a symphony by Shostakovitch and the subject of a novel by Anatoly Kuznetzov.  Jews who had lived in Ukraine were wiped out by the Ukrainians and Germans  from 1942 to 1942. 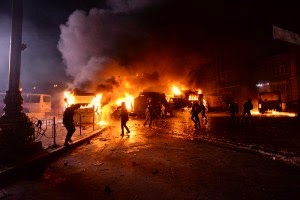 In the post-war period, Soviet anti-Semitism has been felt strongly in Kiev.  In 1988 there were 152,000 Jews living there.  Today Jews are not safe again due to the Russian and Rebels fight over Ukraine as a independent state.  In February, "“The situation here is dire,” said Yossi Asman, a Chabad yeshiva student and son of the chief rabbi. “We have been gathering up families and shuttling them out to safer neighborhoods.”  Two Chabad Yeshiva students had been attacked in Kiev.  Even the food supply in the city was dwindling.  The Israeli Embassy told the Jewish community not to go outside their homes.  Too many attacks had been discovered that were planned on Jews.  Again, 2014, Jews are still the scapegoats  of attacks in the battle between Ukrainians and Russia.   Perhaps Israel is the only answer for them.