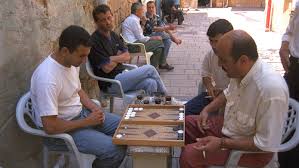 Arabs in Israel playing my favorite game, Sheshbesh (Backgammon)
Israel has about 1.4 million Arab citizens who have all the rights as Jews do in this very tiny state.

Israel is bordered by Judea and Samaria,  heavily populated with Muslim Arabs of Fatah, former PLO terrorists, as well as Gaza's Muslim Hamas terrorists.  Both Hamas and Fatah have joined up for one purpose, to drive Israel into the sea, or in other words, to destroy Israel and make it a Muslim state.  This was confirmed at their meeting in Africa in Khartoom in 1967 after the Six Day War of 67.

The fight from the Muslims is coming in all way; rockets and missiles raining down from Gaza into southern Israel as well as the "Palestinians" getting into the UN through UNESCO and attempting to use this group to destroy the Jewishness in Israel. To this day, Hamas continues to rain rockets on Israel.  (I wrote this several years ago way before COVID 19 when I heard about it but didn't publish.)

It had been using some Arab high-schoolers from Israel before COVID 19  to go into American high schools and spread their hateful propaganda against Israel. 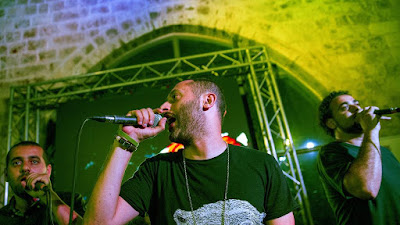 Lincoln High has experienced such a program through the Qatar Foundation International, who has sponsored DAM, a three brother rap group's visit to the high school.  It was at first found to be presenting to only the Arabic language class, then was found to spread to other classes as well as in a student assembly given on November 4th and again that evening at a concert sponsored by Portland State University's Middle East Studies Center.  They also included a film apart from their rapping  depicting Israel as an Apartheid, fascist state.  Marcia Weiss, a Lincoln parent and JFGP board member as well as Becky Davidson, a Wilson High School student, co-president of the Jewish Student Union at Wilson, agreed that anyone not understanding the issues in Israel would be swayed by DAM's opinions.  Even the teachers and principal at Lincoln seem to not understand.  I personally feel that Cain would do a better job of understanding Israel's situation than he did with Libya.

The group used rap to show their dislike of being treated like someone different in Israel like having to show ID at certain places.  They neglected to admit that everyone, Jew and Arab must do this and they were not alone.  This is due to the terrorism that has occurred and must happen in order to protect all citizens.  I myself had to show the contents of my purse and bags when I went into any store from 1980-1985.  They hate to speak in Arabic on buses and get angry if people look at them for it.  Otherwise, they do blend into society, not being different in other ways. They neglect to mention that signs all over in Israel are in 3 languages; Hebrew, Arabic and English.  They shouldn't feel oppressed but may from the influence of their parents, and of course, Hamas.  Their lyrics are crossing a line to hate.  What they present is an extreme and mendacious portrait in which Israelis are Nazis.  They think that Jews murdered by terrorists is what they deserve.   Their differences, though small, are being played on by Hamas, I'm sure, whose goals are well known in wanting to destroy Israel and who rain missiles on southern Israel constantly.  The only reason they haven't hit the rest of Israel is because they haven't procured the missiles that can reach that far-yet.

The school principal and the superintendent of schools so far see nothing wrong in bringing this group to the school while much of the Jewish community including their children are upset by it.  Lincoln High, formerly heavily populated by Jewish students as it is the school within the borders of the old Jewish neighborhood of South Portland, now have Jewish students afraid.  The non-knowledgable teaching community feel they are just giving students the opportunity to hear another perspective on a controversial issue, the Israel-Palestinian conflict to young students completely uneducated in the points.

Posted by Nadene Goldfoot at 11:23 AM