Why a Palestine Should Not Be Recognized By the U.N.: The Terrorist Groups Involved 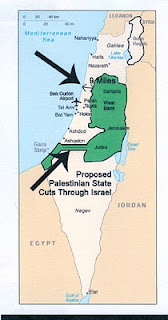 Nadene Goldfoot
The PLO was founded in 1964.  This terrorizing political group  attacked Israel in 1967 along with all the other Arab neighbors who are so adamant against having a Jewish state in their midst.  Strangely, there were several Arab leaders pre-1948 who were all for the idea.  What developed was a fever for a radical Muslim ideology.

Yasser Arafat was the chairman from 1969 to 2004 when he died.  Then Mahmoud Abbas, or Abu Mazen took over from 2005 to the present.  Their ideology is that they are secular Arab nationalists.  "Armed struggle is the only way to liberate "Palestine." They feel that Israel is entirely illegal regardless of the time it has existed.  They claim that the history of the Jews or their religious ties to the land are not factual and have been busy trying to erase them physically and in the minds of their people.  Their activities against Israel has been plane hijackings, hostage taking, bombings, assassination, targeting Israeli civilians and Jews globally and conducting operations against Lebanese, Jordanians and Americans.  They fought against King Hussein of Jordan.

What did the UN do to help Israel?  They turned around and recognized the PLO as the sole representative of the Palestinian people.  1996 saw the PLO votes for amending its Charter to delete clauses calling for the destruction of Israel, but renigged by not changing this in public documents.  By 2007 they were found to be stealing international aid by being corrupt leaders.

This led to 1959's founding of the Fatah group who continue to call for the national liberation of Palestine. It has a militia group called the Tanzim and Al Aqsa Martyrs Brigade.  This was organized by Yasser Arafat with Mahmood Abas and others.  Their idiology is that of a revolutionary nationalist liberation group.  They came into being in 1968 and remain the PLO's main faction.  They practice guerilla warfare, shootings, bombings, and rocket and suicide attacks.  Females entered into it with the first suicide bomber in 2002, 5 others from 2002 to 2005.  214 terrorist attacks from them occurred from 2003-2004.  33 suicide bombings came from this group from 2000 to 2005.  This group has several militias.  They started coordinating with radical Islamist terrorist groups for joint terrorist attacks.  This is the "mild-mannered" political group led by Abbas who says one thing to the international public and another to his people.

1987 found Hamas created by Sheikh Ah;med Yassin and continued by Khaled Mashal in 2004 to today.  They are not only residing in the Gaza Strip but are also found in Judea-Samaria with leaders also living in Syria, Lebanon and Iran.  Their ideology goes along with the Muslim Brotherhood Islamists.  They opposed the PLO and fought enough to chase out Abbas.  Now they have rejoined, yet are still disagreeing, even to the moment of Abbas going to the UN in a few days.  They say that Islam will obliterate Israel and that there is no solution for the Palestinian question except through Jihad, their Holy War.  This is right from their Hamas Charter.

These terrorists are responsible for 40% of suicide bombings and dominate Gaza.  They use the constant rocket and mortar attacks on Israel that the UN has ignored.  They are tied to Syria, Iran and Lebanon and funded from groups in Saudi Arabia, the Gulf States, Western Europe, Hezbollah terrorists and others.  The US State Department lists them as a terrorist organization yet everyone has been pushing Israel to make peace with them.

And yet we even have American Rabbis who think that if these terrorists, who have been terrorizing Israel since its inception  in 1948 and have been offered every iota on the plate except a crumb deserves their own state.  At one time they were offered 90% of Judea and Samaria and refused it, wanting 100%.  Gaza was given up by the Jews in the hopes and promises of peace.  They even may think that suddenly if they have their own "Palestine." they will become happy campers and live in peace with Israel forever after like an arranged marriage.

How deluded they are in my eyes.  I can see how this will not be the case as the need has never been to have their own state as their refusals have shown,  but to drive out the one and only Jewish one.  It's an affront to the Muslims who have taken up the radical side of Islam.  This is a war of religion, not of land ownership.

By December 27, 2008, Israel had been enduring 8 years of shelling from the Arabs in Gaza which meant 12,000 rocket attacks. They finally fought back in defense with Operation Cast Lead's operation.  Since then, attacks have continued.

Israel hasn't been the negator in the Peace Talks.  At the Camp David negotiations, Arafat had turned the peace table upside down on President Clinton.  In Arafat's mind was the planned intifada that then broke out.  It did not happen because Sharon had visited the al-Aqsa Mosque which is also the site of the Jewish Temple.  That turned out to be a coincidence.  This fact comes from  Imad Falouji, the PA Communications Minister on March 3, 2001.

There are other compteing terrorist groups.  Sometimes they cooperate with each other in an offense against Israel. The Palestinian Islamic Jihad (PIJ) was founded in 1979 and are in both places.  Hezbollah (Party of G0D) came about by Iran  in 1982 in Lebanon.  The PFLP (Popular Front for the Liberation of Palestine of 1967 is also in Judea-Samaria, Gaza, Syria and Lebanon.  Iran has given Hamas and Hezbollah millions of dollars each year.  Hamas's Khaled Maashal lives in Damascus, Syria.  Hamas and Hezbollah signed an agreement in 2004 to increase attacks on Israel.

Yet the "wise men" of the U.N, and shamefully some USA Rabbis and their followers blame Israel for not making peace.  They confuse wishful thinking and the Jewish and Christian precepts of fairness and rightousness with reality, and the reality is that Israel's neighbors' leadership really do not want to make peace.  It's like this:  You can lead a horse to water but you can't make him drink.  When the Arabs want to "drink the water of peace with Jews, then we might think the Messiah has arrived and we'll have peaceful times that we all thirst for.

Can I just ask.... so Palestine should not exist because proposed plan "cuts" Israel on two halves while Israel should exist on a PALESTINIAN LAND ... because they have the same right to live there as "USA americans" have on NATIVE AMERICAN SOIL. LET ME GIVE THIS BLOGGER A CLAP OF EPICNESS ... DUDE YOUR LOGIC IS A REAL MVP

Can I just ask.... so Palestine should not exist because proposed plan "cuts" Israel on two halves while Israel should exist on a PALESTINIAN LAND ... because they have the same right to live there as "USA americans" have on NATIVE AMERICAN SOIL. LET ME GIVE THIS BLOGGER A CLAP OF EPICNESS ... DUDE YOUR LOGIC IS A REAL MVP